In an interview with Kitco News, Bloomberg Intelligence Senior Commodity Strategist, Mike McGlone, said the path of least resistance appears to the upside in gold, as the bulls look to breach the $1900 mark.

It was the cut to zero interest rates by the Federal Reserve in December 2008 that accelerated the gold bull market to the 2011 peak. Covid-19 is a worthy catalyst to buoy gold toward its highs. That fact that the metal has reached records in most currencies leads us to expect that a similar result for dollar-denominated gold is only a matter of time.

With base rates at zero or negative, and the Federal Reserve embarking on seemingly unlimited monetary stimulus akin to 2008, we see gold extending its $1,900-an-ounce peak as the next in a stair-step recovery process.”

The quasi-currency price has a strong relationship with Fed rate expectations.

The propensity of governments to indiscriminately flush systems with cash, on the back of Covid-19 demand shocks, promises to add similar buoyancy to debt-to-GDP, along with gold.

Gold is showing divergent strength vs. the dollar, similar to the early days of the bull market at the start of the millennium … Our graphic depicts the upward-sloping 50-week averages for gold and the dollar, akin to 2001-02. When the greenback peaked about two decades ago, it was a launchpad for gold.

The extent of the Covid-19-fueled global recession and corresponding monetary stimulus are firm tailwinds for gold, and obstacles for most other commodities. We see the favorable pre-outbreak conditions in place for precious metals vs. most other assets simply accelerating.” 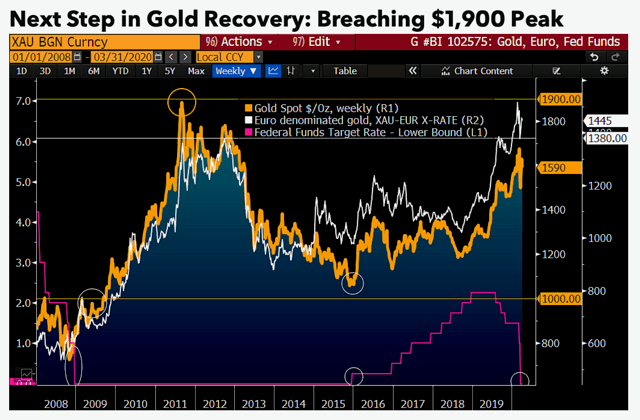 EUR/USD has managed to stage a rebound toward  the 1.0740 price zone after having dropped to a fresh multi-week low below 1.0670. Stocks rally and the US Dollar eases as Fed Chairman Powell said that stronger-than-expected data will see the Fed raising rates accordingly.