NYSE:GE has had a rough year as many of its main revenue streams have been affected in some way or another by the COVID-19 pandemic. Shares of the industrial company are down over 30% this year, lagging the S&P 500 by over 40%. The stock is now cruising near all-time lows, adding to its losses early on Tuesday session, losing around 1% in the first hour of trading. GE’s stock is now trading at levels below its 50-day and 200-day moving average so even with all of these new deals on the horizon, the needle has barely moved in the investor's eyes.

GE Renewable Energy has officially won its wind turbine deal from Invenergy as the alternative energy arm of General Electric will deliver 187 wind turbines around the United States. GE has also secured numerous other contracts with Morocco, Austria, and India, in its efforts to provide clean and alternative energy power to countries all over the world. Finally, General Electric’s Aviation wing also received a boost as Boeing (NYSE:BA) announced that its troublesome 737 MAX plane was ready to be test flown again by the FAA. GE builds the engines for these planes and if they once again cleared for flight, demand should start to build again. 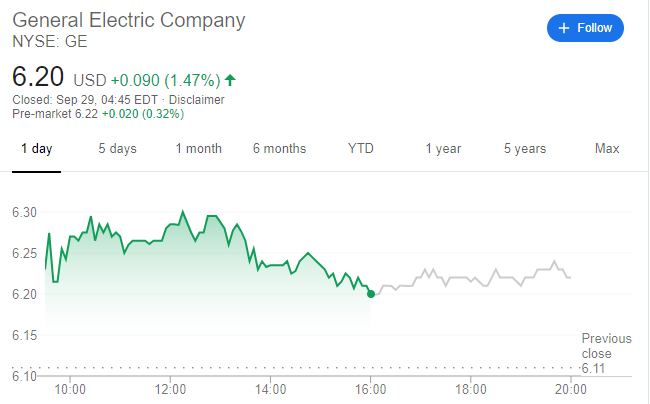 GE’s stock has not really budged but at this point, bargain investors could do worse than starting a position at the ground floor. With the economy slowly opening back up, General Electric’s main revenue streams should follow suit. The renewable energy and aviation news are positives for GE, something the company has not had much of in 2020, so undoubtedly investors are hoping 2021 will be a much better year for the stock.

The price of gold has been testing the bearish commitments above the $1,900 psychological level following a brief spell below it, printing a low of $1,891.50.