NASDAQ:FCEL paced the renewable energy sector even though the recent quarterly earnings report returned mixed results. On Friday, FuelCell Energy added 4.86% to close the final trading session of the week at $18.13, which puts it back within reach of the 52-week high price of $20.94. Shares are now up a whopping 68% so far in 2021 and a total of 850% over the past 52-weeks as the bullish sentiment surrounding clean energy firms is skyrocketing now that President-elect Biden is officially in the Oval Office.

FuelCell reported its quarterly earnings earlier this week and the stock took a dive after results were mixed. While the alternative energy provider was able to top Wall Street’s revenue expectations, its losses were calculated to be $0.08 which was slightly more than the consensus $0.07 estimate. FuelCell CEO Jason Few put emphasis on the company’s revenue growth and cited optimism for significant opportunities on the horizon for FuelCell, and described four products that it was focussing on in the short term: distributed generation, distributed hydrogen, long-duration hydrogen storage, and power generation. 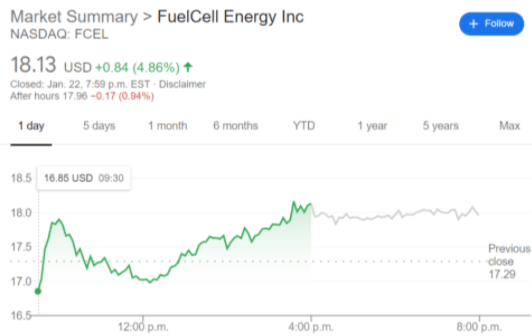 Like many other alternative energy companies, Few also reiterated his excitement over President-elect Biden and his emphasis on green energy as a focus for America. The FuelCell CEO stated optimism that the United States is now positioned to make up ground on Asia and Europe in terms of its clean energy policies. Despite industry rivals like Bloom Energy (NYSE:BE) recently receiving analyst downgrades as a sector that is too richly valued, FCEL continues to see its price climb back towards a new all-time high.