Dominos is a short delivery driver. Also, I share some hotel and restaurant experiences from my latest trips. 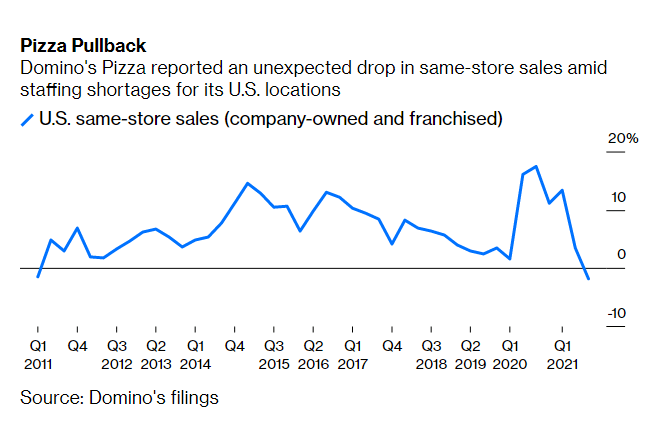 Shortage of the day

The shortage of the day: There’s No One to Deliver the Pizzas.

Shares of Domino’s Pizza Inc. initially fell Thursday morning after the largest pizza company in the world posted its first decline in U.S. same-store sales in more than a decade. These results came as a shock to analysts and investors, who were expecting continued growth while the pandemic supercharges demand for takeout and delivery of meals. But demand may not be the problem. Rather, a dearth of delivery drivers – amid a national shortage of workers – could be what’s eating into Domino’s sales. (Shares later reversed course and erased their decline.)

It just so happens that mid-July marked the first of the monthly payments for the expanded child tax credit, a form of Covid-19 relief money that provides eligible families $300 for each child younger than 6 and $250 for older children. Rutherford suspects that with the child tax credit, some part-time Domino’s drivers are working fewer hours.

Hotel anecdotes of the day

I have been on the road for a few days. I am currently in Escalante, Utah chasing fall colors.

On the last trip to Colorado at the beginning of October, the hotel had an automated check-in. Insert your driver's license and a kiosk spits out your keys.

I had trouble because I registered as Mike but my license says "Michael". Fortunately, there was someone at the counter to help.

On this trip, the office was closed. Instead, they left keys and instructions for me to find them. There is a bill in the room for me to sign.

This will not work for large chains of course, but having something similar happen twice in two trips, it's a sign of how some smaller outfits are coping.

I split my time this trip between Torrey, Utah (Capitol Reef National Park), and Escalante. I asked for a late checkout in Torrey and was told it was not possible due to a shortage of help.

Restaurant anecdotes of the day

Friday night, I went to my favorite restaurant in Escalante. There was a change this trip from last year.

Menus were at the door. You ordered, then found a table or waited until one was available.

Silverware was self-serve, off to the side. A server (the cashier) brought drinks and dinner when it was ready.

The default tip was 22% despite the lack of service.

This was not a dive. The restaurant has a nice dining room with a piano player who was also a great singer. She sang some Patsy Cline tune beautifully. There were lit candles on the tables.

From the restaurant perspective, think of the savings. Not counting the piano player, this was a 2-person show on a Friday night. A cashier-server and a cook. Perhaps there was another person in the back I did not see. I only saw the cashier-server.