Currently, Netflix (#NFLX) is the world’s largest US media service provider with a capitalization of $282.36 bln, whose core business is its paid subscription media streaming service, which offers online streaming of a library of movies and television shows, including those produced in-house. Netflix operates in more than 190 countries and has a total of approximately 213.3 million subscribers worldwide. Netflix is scheduled to release Q3 2021 earnings results on October 19, after the market close. The report is for the end of fiscal quarter September 2021 and expectations are positive due to the launch of a series that has broken Netflix’s viewing records.

Netflix outperforms the media industry with a gain of 18% compared to the industry average of 1.7% in the last 3 months.

Netflix has had mixed perspectives due to several factors, including the evolution of the COVID-19 pandemic that has affected the development of the platform, since at the beginning of the pandemic in 2020, subscriber growth soared since all were keeping in their homes and occupying a higher level of entertainment, Netflix currently registered a slowdown that went from 13.6% in the first quarter to 8.4% in the second quarter of the year and is currently expected to rise to 9.1% this third quarter in subscriber growth due to competition with its main competitors being Disney+, HBO+, Apple TV+ and Amazon Prime Video, adding only 5.52 million in the first and second quarters of this year reducing the number of subscribers in the US and Canada losing 430,000 but increasing Latin America and Asia-Pacific accounting for almost all subscriber growth in Q2.

Another issue is that Netflix would be investing in video games, currently focused on the debut of mobile devices that they plan to release in the next year, beginning with the acquisition of the game studio Night School Studio, in addition to having hired a former executive of Electronic Arts Inc. and Facebook Inc. to lead the project.

Something that has recently surprised the media and that will weigh on the earnings report, is the success of the new Netflix series called “The Squid Game ” that has exceeded the expectations of any other series produced by them, being “the largest series in the history of the company.” It is a South Korean series that premiered on September 17 of the current year, about a group of people with a life drowned in debt and poverty who are offered to enter a series of games in order to overcome them (and survive) and walk away with a prize of 45.6 billion Korean Won (approximately $ 48 million) that would settle them for the rest of their lives.

“Before, with the old media, when a filmmaker from one country wanted to take his film to another country, there were many barriers due to time and language,” said Hwang Dong-hyuk, director of the series

Last week, Netflix published on its official Twitter account that the series has reached 111 million views (currently 130 million), in addition to being in the Top 10 most viewed in more than 90 countries in the world, which would translate into a gigantic benefit for the company that is probably not being taken into account in the current estimates due to the rapid success and close to the date of the report, however investors should keep it in mind.

According to Bloomberg in an internal Netflix document, The Squid Game will bring Netflix $891 million, an extraordinarily gigantic profit (x41.6 times) compared to the $21.4 million, which was spent on the production of the series. This data is based on the number of views.

“Netflix does not analyze these metrics outside of the company and takes important steps to protect them from disclosure.” -Netflix lawyer letter

In addition, a lawyer communicated that the publication of these confidential data was “inappropriate”…

On the other hand, for Zacks Investment Research, Netflix is in a #3 rank that would be a #Hold being in the place #60 of #251 which makes it enter the Top 24 of the broadcasting industry of radio and television, although due to the high expectations a change to buy or strong buy is expected. Zacks predicts EPS of $ 2.57 with ESP of 0.16%, a not very high number but compared to last quarter of -6.01% quite contrasting. Analysts raise estimates to 47.1% earnings growth and 16.3% revenue growth for the quarter.

Netflix spent much of 2020 and 2021 trying to break the resistance of $550. Since May of this year, Netflix has been in a bullish rally from the lows of $478.31, later managing to recover the psychological level of $500 and finally managing to overcome the resistance of $550 in August, from where it has steadily marched to the psychological level of $600 and managed to overcome and maintain it until this current month, leaving new all-time highs at $646.53. The current price is $637.77.

Netflix usually pulls back after the release of the quarterly earnings report although due to the mixed outlook it is not known with certainty what could happen. If we manage to overcome the current historical highs, we will find the most immediate psychological resistance at $650 and if it manages to maintain it, the next goal could be up to the psychological level of $700. In the case of not being able to maintain it, the  immediate support in the aforementioned range, after the 50-period H4 SMA at $606.66, followed by the psychological level of $600 and from there to the key range that goes from $550 to $570 and from there up to $500. 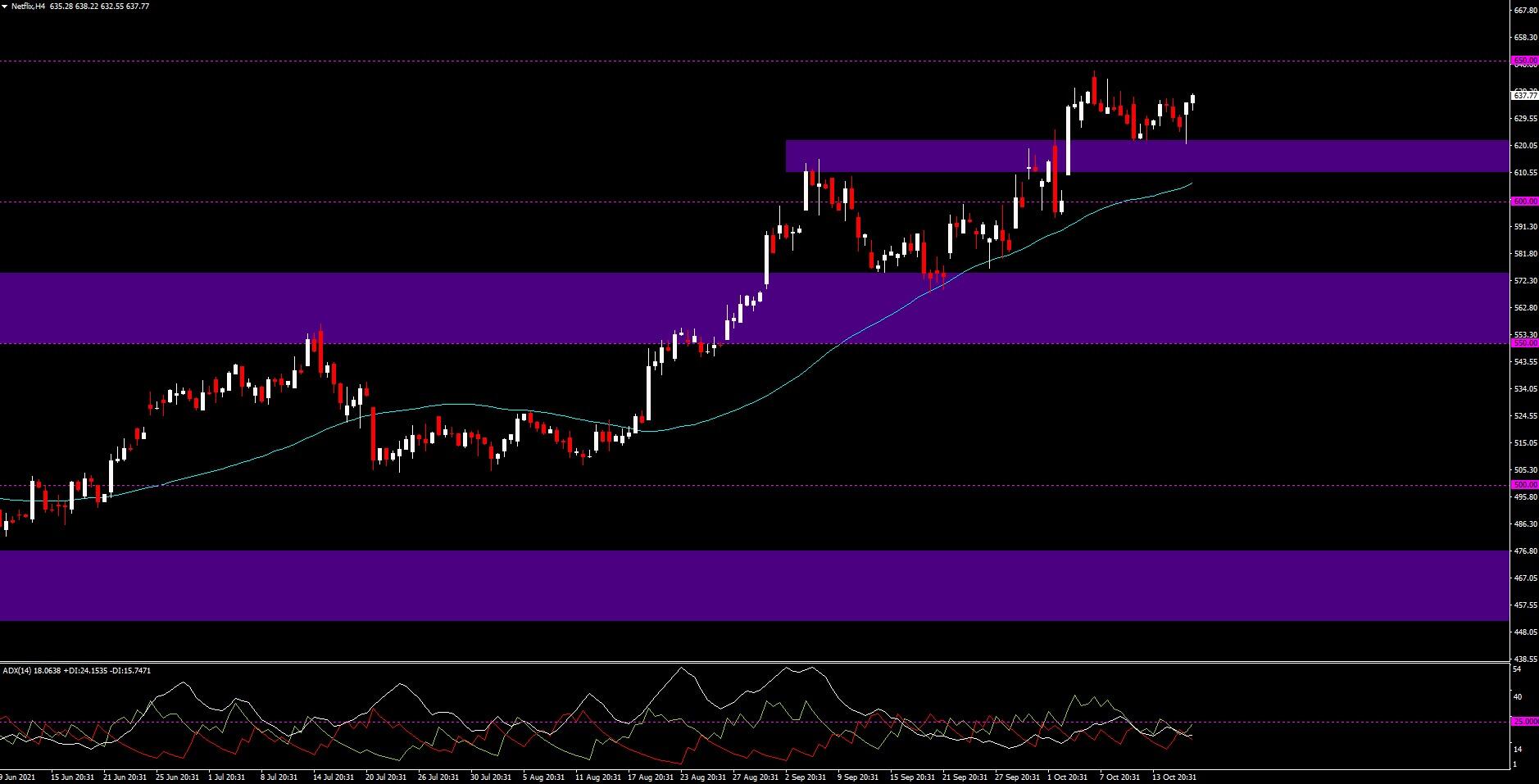 The greenback recovers its poise as the mood partially sours, sending GBP/USD to its lowest since December 2020. Impending Brexit risks and rising covid cases in the UK weigh on the pound, fueled by persistent uncertainty about the Omicron variant.

Gold is flat and sideways in consolidating markets awaiting a catalyst. Gold is consolidating in the $1,779 and $1,793 range with markets trying to assess the outlook with regards to inflation, central banks and the uncertainty surrounding the Covid-19 variant.