Update July 23: After several turbulent days, shares of Churchill Capital Corp IV (NYSE: CCIV) are enjoying some calm after the storm – or anti-climax – after the SPAC= merger with Lucid Motors came through. CCIV – soon to become LCID – is changing hands at around $22.88 early in Friday's session, a minor change. Investors will now fully focus on Peter Rawlinson's electric vehicle company's success. Tesla chief Elon Musk has been busy discussing cryptocurrencies.

NYSE:CCIV retraced on its near 10% gain on Tuesday, as investors gave off mixed signals on the eve of the company’s shareholder vote to merge with Lucid Motors. Shares of CCIV fell by 3.50% on Wednesday and closed the trading day at $23.43. There has been noted increased volatility by SPAC stocks as they approach their merger dates, so this should come as no surprise. The move also came on a day where the broader electric vehicle industry was mixed, with Tesla (NASDAQ:TSLA) falling 0.79% after CEO Elon Musk once again implied that the company would accept Bitcoin as payment for its cars.

Thursday marks the day that investors have been waiting months for, as shareholders will vote on the official merger between CCIV and Lucid. The vote should pass with little doubt, although shareholder bullishness comes despite question marks about production time for its cars. Lucid continues to be vague about the exact release date for its Lucid Air sedans, as well as estimates on future scaling. Lucid has reiterated that the vehicles will be on the roads in the second half of 2021, but with only five months left in the year, investors should look for more clarity before buying any more shares.

Lucid did make an announcement on Wednesday regarding future plans for European expansion. The automaker expects to be in the crowded German market by 2022, and is also looking to expand into other countries like Norway, which has been a popular launch country for companies like Tesla, Nio (NYSE:NIO), BYD (OTC:BYDDY), and XPeng (NYSE:XPEV). 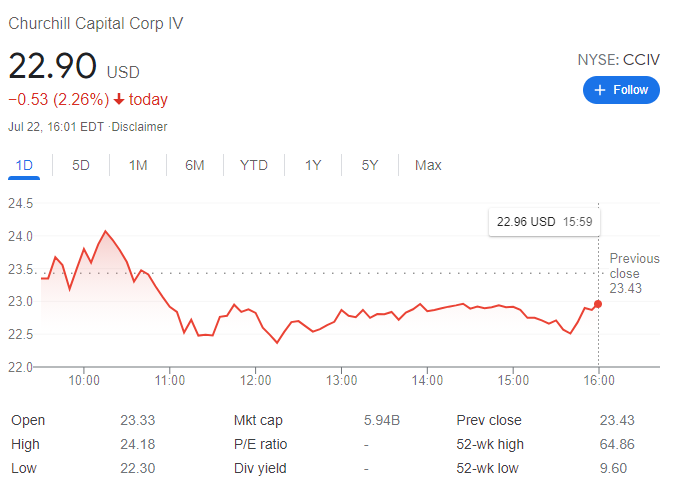 Previous update: CCIV shares are up over 1% in early trading on Thursday as the vote nears on the Lucid merger. Sector leader Tesla is also up on the day. The vote on the merger with Lucid Motors takes place on Thursday with investors awaiting the outcome.

Update July 23: Shares of Churchill Capital IV (NYSE: CCIV) fell as low as $22.33 before recovering to end Thursday at $22.90, still down 2.26%. CCIV stocks ignored the positive Wall Street indices amid ‘sell the fact’ trading, as the CCIV shareholders approved the merger with Lucid Motors. All eyes now remain on the special meeting of the shareholders that will be reconvened on Friday to try to secure the votes for this proposal on the proxy statement, concerning the adoption of the amended and restated certificate of incorporation.

EUR/USD is trading well below 1.18 and down on the day. Markit's US Services PMI missed estimates with 59.8, souring sentiment. Worries about covid provide some support to the safe-haven dollar. The ECB's dovish decision pressures the euro.

GBP/USD hovers around 1.3750 amid after mixed UK data

GBP/USD is holding above 1.3750, clinging to this level after UK Retail Sales beat estimates but Markit's PMIs missed on both sides of the pond. Covid headlines are eyed.

Gold price is trading on the wrong footing this Friday, eyeing the first weekly loss in five weeks, as the US dollar remains at the highest levels in three months.

Cardano price pierced the July 18 swing high at $1.21, indicating a resurgence of buyers. Although ADA might try to slice through $1.25, a retracement will likely evolve before tagging $1.37.

Two steps down, one step up – that has been the playbook for risk-averse markets. What happens when traders have little time to act ahead of the weekend and the last word belongs to a downbeat figure?