Update: One of the most-mentioned stocks in the Reddit subforum Wallstreetbets, NASDAQs BBBY, continued to stabilize at last week's lows. The stock has morphed into a potentially bullish formation on the hourly charts as the price meets support near the close of around $6.38c. The pattern is a harmonic W-formation and following the reversion to the neckline, the price could be attractive to the bulls for Wednesday's open. However, the bulls will need to get above $6.84 as being the September 7th lows. If the bulls do commit to the correction, a 50% retracement comes in near $7.30. On the other hand, $5.80 is beckoning the bears on the daily chart as the next structure in line for a retest as support.

recovered some ground on Tuesday, despite the sour tone of Wall Street. The share closed 0.16% higher at $6.38, as the Nasdaq Composite seesawed around its opening throughout the session, ending it marginally higher, as the index added 0.25%. The Dow Jones Industrial Average plunged after the opening but trimmed part of its losses and finished the day at 29.134, down 0.43% and further falling into bearish territory. Finally, the S&P500 shed 7 points to close the day at 3,647.

US Federal Reserve officials expressed concerns about the aggressive pace of monetary tightening but fears about a worldwide recession maintain the pressure on high-yielding assets. 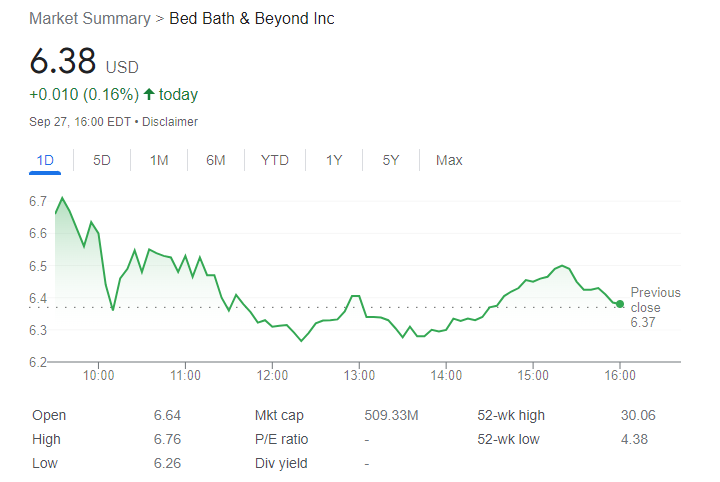 Previous update: Bed Bath & Beyond (BBBY) started the week on the back foot as the meme stock fell lower for the fifth consecutive trading day. On Monday, shares of BBBY dropped by a further 4.5% and closed the trading session at a price of $6.37. Stocks extended their declines as well on Monday as all three major indices also fell for the fifth consecutive day. The recent slide has pushed the Dow Jones into bear market territory, while the S&P 500 saw its lowest close since 2020. Overall, the Dow Jones lost by 329 basis points, the S&P 500 fell by 1%, and the NASDAQ dropped lower by 0.6% during the session.

News out of another meme company had retail traders heading for the hills as AMC Entertainment (AMC) disclosed a potential stock sale. The move in question would be to issue up to 425 million shares of its APE preferred units, with the ability to sell even more in the future. It was widely known that the APE shares would likely be used to raise further capital for the company to reduce its debts, but the reality seems to be setting in. Shares of AMC and APE were down by 14.5% and 5.9%, respectively, on Monday.

Since the company announced its plans for a strategic turnaround a few weeks ago, little else has been mentioned by management. The strategy will see up to 150 stores closed around the United States, with the unloading of its workforce as well. It is widely believed that this might not be enough to reverse the company’s fortunes, and a lack of follow-up from the company should be concerning to shareholders.