AMC shares fell on Friday but for such a volatile name a loss of 3% was actually not that bad a performance. Everything was swamped in a sea of red as panic ensued the discovery of a new covid variant in South Africa. The new variant is apparently more transmissible than the delta variant and looks to be able to avoid the current suite of vaccines. AMC fell 3% but given the sector, it operates in we felt it held up relatively well. In the event the worst fears over Omicron are realized, travel and leisure stocks have the most to lose. Airlines collapsed on Friday with American Airlines (AAL) down 9% and cruise stocks also suffering. Cinema stocks though would take a disproportionate hit from any more restrictions. If the logic to punish airline and cruise stocks is sound then the same logic should have seen entertainment and cinema stocks similarly hammered. Lockdowns will have a huge impact. AMC barely survived the last lockdown. By comparison, Cineworld (CINE) fell 8% on Friday in London. Cineworld is the second biggest cinema operator behind AMC.

Our AMC chart above shows just how much this one has gained from the meme stock madness in 2021 so some AMC apes would be forgiven for taking some profits ahead of year-end surely.

However, the good news just keeps on coming. We note news out this morning that Spider-Man No Way Home ticket sales crashed numerous box office sites as demand soared. The holiday season is upon us and that means peak cinema attendance. AMC also announced an entry into the Non-Fungible Token (NFT) space to coincide with the Spider Man release. AMC has teamed up with Sony Pictures to offer 86,000 NFT's for the Dec 16 release of the latest Spider-Man movie. CEO Adam Aron credited retail investors with the idea.

When a stock reacts well to bad news it usually leads to a bullish breakout. While falling 3% is not exactly reacting well it was when you consider the background on Friday. Stocks in Europe collapsed and things got panicky. AMC held the line quite well then. $34.60 remains the line in the sand support. Above this and there is hope. The problem is volatility and momentum have died so we are left with fewer and fewer opportunities. Shorts have been scared away and no new longs can be tempted in, so we are left with a stalemate. We still feel the temptation to cash in some gains will be too hard to avoid from some AMC holders and with a lack of new impetus for buyers, AMC is set for a slow steady decline into year-end. Other names have taken the volatility such as Rivian (RIVN). Even with today's bounce on for US futures, AMC is barely moving in the premarket. We have set a series of higher lows but also a series of lower highs ie stalemate and a triangle. Usually, a triangle results in a powerful breakout but we just cannot see a catalyst if even Friday failed to provide one. 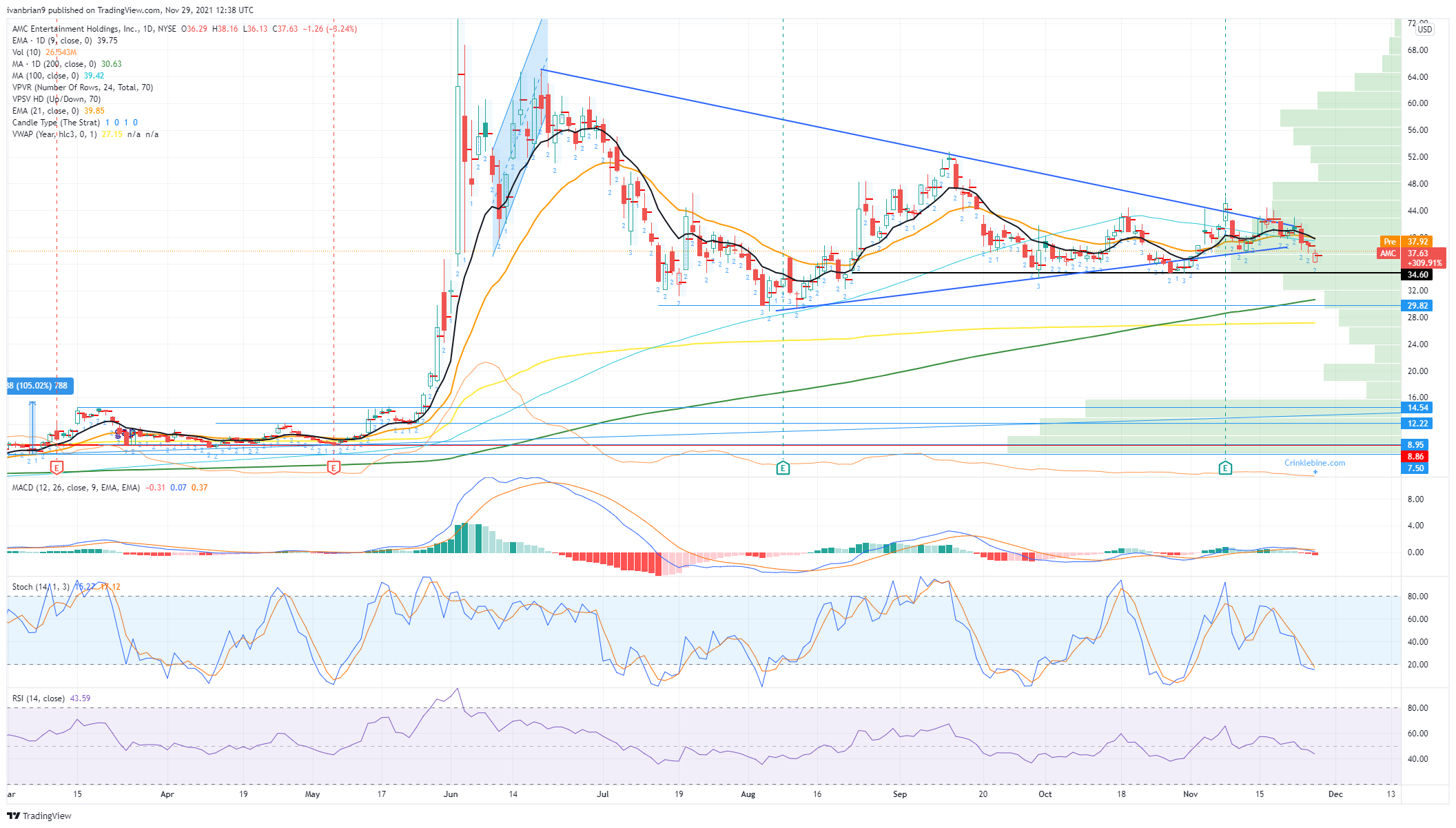 As mentioned volatility is falling sharply. Depending on your view this may make buying out of the money calls or puts more affordable if you suspect a breakout.