In Elliott Wave, there are several different corrective structures. Two of the most common corrective structures are zigzag ABC and double three WXY. A zigzag is a simple correction that all wavers is familiar with. The subdivision of ABC is 5-3-5, as the graph below illustrates. 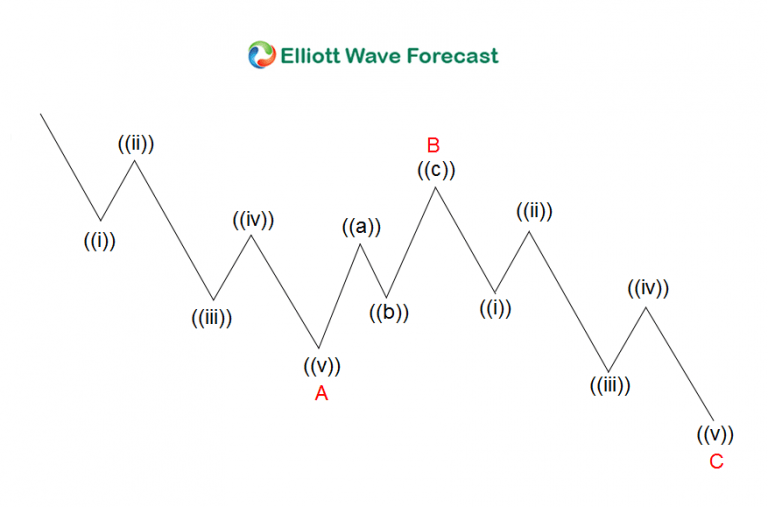 The concept in Elliott Wave is simple. The main thesis is that trend moves in 5 waves called an impulse, while counter-trend moves in 3 waves. Thus in a bullish market, traders want to trade in the direction of the trend to the upside by buying a counter-trend pullback. To buy a pullback, traders need to wait for a clear 3 waves pullback such as a zigzag ABC above. In a typical ABC correction, wave C tends to end somewhere around 100% –" 161.8% Fibonacci extension of wave A. Wave C should not extend more than 161.8% relative to wave A otherwise the entire decline can become a 5 waves.

The reason is because wave 3 in an impulse is usually the strongest and the longest wave. In Fibonacci terms, wave 3 tends to be at least 161.8% extension of wave 1. Since the subdivision of wave 1 and wave 3 in an impulse is also in 5 waves, we do not know ahead of time if the decline will be ABC or 123. Traders can identify whether the decline is a beginning of a 5 waves impulse or an ABC is by looking at the third swing extension. If the third swing extends only to 100% of the first swing, then it’s an ABC zigzag. If the third swing extends to at least 161.8% of the first swing, then the odd increases that we are in an impulsive structure.

Traders who want to buy an ABC counter-trend move therefore can limit the risk at the 161.8% extension because below there, the entire decline can become impulsive and trend direction could change. Thus, traders who trade ABC pattern always have the risk that they are actually trying to buy a wave 3. 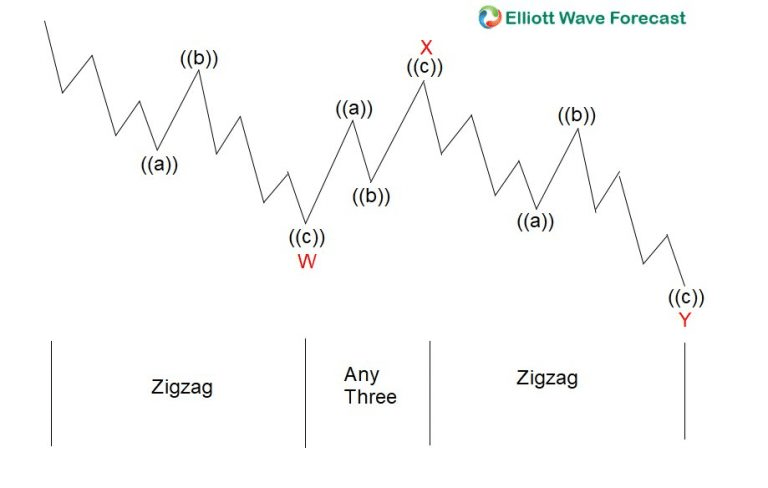 Another type of corrective structure is a double three WXY, as the graph above illustrates. This is a complex correction involving two types of corrective structures. In the graph above, the first leg wave W and third leg wave Y are both zigzag. We can call this specific pattern a double zigzag. We can consider WXY as a 3-3-3 pattern. The first (W), second (X), and third leg (Y) all subdivide in 3 waves ((a))-((b))-((c)). In the simplest term, these are two zigzag corrections linked together in WXY. Despite the complex subdivision , this is essentially also a 3 swing correction labelled as WXY if we just focus on the main degree and not the subdivision.

Similar to ABC, wave Y also usually ends at 100% –" 161.8% Fibonacci extension relative to wave W. The third swing wave Y should not go below 161.8% extension of the first swing wave W. Otherwise, it increases the odd of further downside. A trader who wants to buy a corrective pattern WXY thus can try to buy wave Y at the 100% of wave W with stop loss below 161.8%. There is however a major difference in buying a WXY correction compared to ABC. In a WXY pattern, the first leg wave W already shows a clear 3 waves subdivision.

Thus, it has confirmed the structure to be corrective. In ABC pattern however, the first leg wave A is in 5 waves. If traders buy wave C at 100% of wave A, they run the risk that wave C can become a wave 3. If traders buy wave Y at 100% of wave W however, the chance that it will become wave 3 and breaks below 161.8% extension is smaller because the first leg wave W in this case subdivides in 3 waves. In an impulse, the first swing wave 1 must subdivide in 5 waves, similar to wave A in a zigzag. Thus, if wave W is in clear 3 waves, it reduces the risk that the decline becomes an impulse.

In summary, WXY is a better corrective pattern to trade than ABC. The pattern reduces the risk that the correction will become an impulse which is something that traders want to avoid.