Markus is a self-made multi-millionaire who was born in Germany. He came to the US in 2002 with $30,000 in his pocket and a dream to become a successful trader.

Over the past 20 years, he traded and invested his way to success in the stock and real estate market, making millions of dollars in the process.

Markus has written three best-selling books about trading and investing that have been translated into multiple languages. His youtube channel with over 4 million views is dedicated to his favorite topic — which is trading stocks and options.

He lives in Austin, TX where he enjoys spending time on the lake watching his kids racing their sailboats.

Now, as you know, I like to use the PowerX Optimizer to find the best trades according to the PowerX strategy, along with The Wheel Strategy.

So here’s my morning routine. Usually, I’m in front of the computer at 8 a.m. Central Time. That is 30 minutes before the US markets open. I run the scanner on PowerX Optimizer, and it finds possible trades based on my criteria.

My Criteria For Finding Stocks

My criteria, for starters, is I like to look for long and short signals because I like to play the markets both ways. I want to see at least a 60% return on my investment. I also want to see stocks that have a closing price between $5 and $250, because I don’t like to trade stocks that are below $5.

I want to see a profit factor that is higher than 3. This means that for every dollar that I would have lost trading the strategy, I would have made $3. I also want a risk-reward ratio of at least 2%. Usually, there are anywhere between 4 & 8 stocks that come up on my scanner every day.

I use three criteria to find A-plus trades. So here’s what I’m looking for. 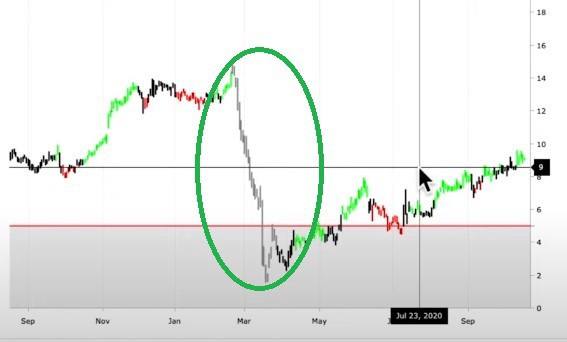 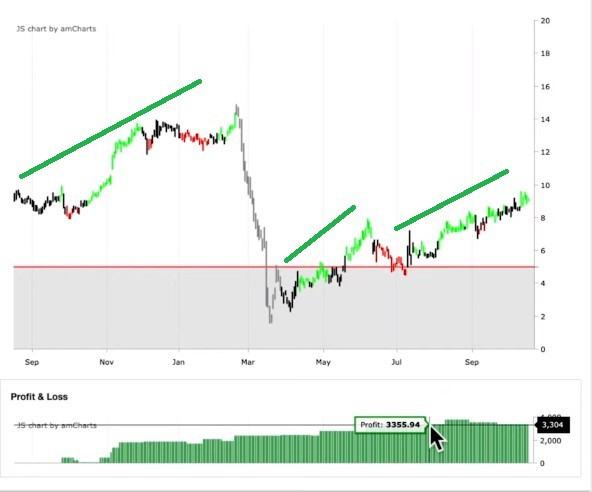 Number two, I’m looking for is trendability. What does trendability mean? It means that I want to see nice trends to the upside and the downside. 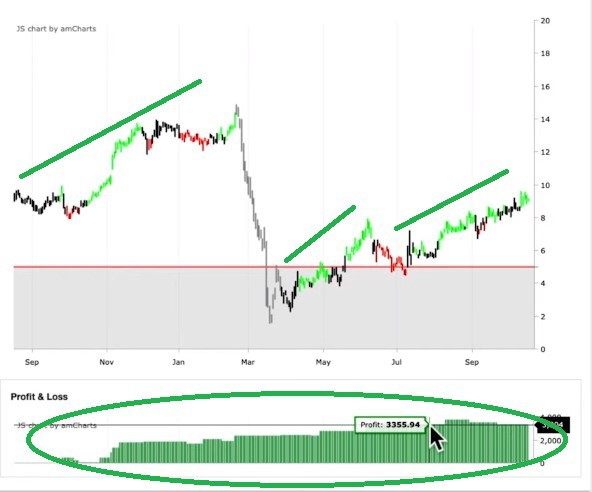 And the last thing, number three, is I’m looking at the P&L chart. What does the P&L chart mean? Now, this is one of the strengths of the PowerX Optimizer software, and this is why I use it every single day. The P&L chart basically shows you what would have happened if I had traded this stock according to the rules of the PowerX strategy over the past year.
So I can take a look at the trading report where I see for the past few trades, what I would have made in profits & losses. 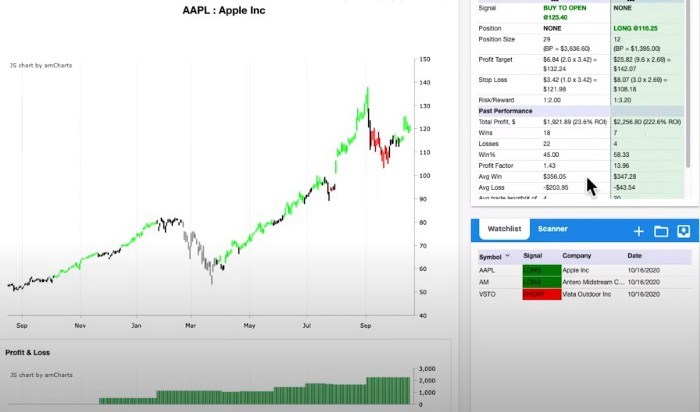 Here is a trade I was in with AAPL a few months back. Let me show you what I want to see in the P&L chart. I want to see that over the past year, if I had traded Apple according to the PowerX strategy, is it nicely going up, and in this case absolutely. So here I would have had 7 winning trades, 4 losing trades for a total of 60%, and a 220% ROI.

So this is what I’m looking for.

When To Sit On Your Hands 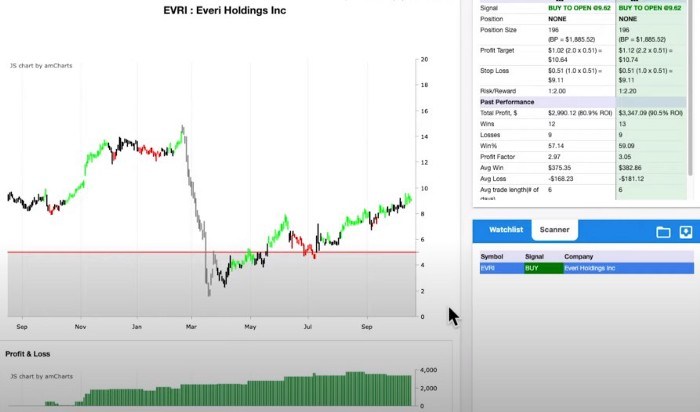 Anyhow, this morning (at the time of this writing) I just saw EVRI on my scanner and it passed MOST of my criteria. First of all, it did pass all my scanner criteria, otherwise, it wouldn’t have come up here. Also, it did pass 2 out of my 3 criteria in terms of gappiness and trendability.

Well after I forced some trades, I realized, well, if you don’t trade, you also don’t lose any money. This is why it’s so important. In the beginning when I got a new tool, or when I had a new trading strategy, I wanted to trade it. All I wanted to do was trade. However, when there’s nothing to trade, DON’T TRADE.

This is why I use the PowerX Optimizer. It a fantastic job of keeping you out of trouble. 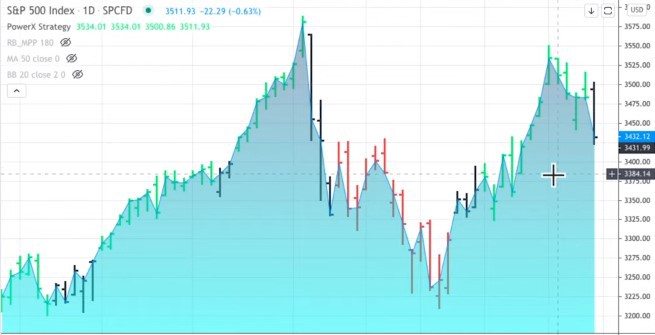 So as you can see, this is a chart of the S&P 500 (from the time of this writing), and for a whole week, there was a lot of uncertainty. We didn’t really have a defined downtrend overall in the markets, or a defined uptrend. We are, in fact, just diddling along. The markets are just teetering.

So now, as you know, I am trading two strategies. In addition to trading the PowerX strategy, I’m also trading the Wheel. So also for the Wheel, I started looking for trades. Let me show you what I was looking for this morning. One of the trades that I thought, ahh you know what, this might actually be a decent trade was Marriott, MAR, but when I looked, however, there wasn’t enough premium in there to sell according to the Wheel.

I looked at another stock that came up on my radar this morning, which was PENN. There was some great premium in there but PENN sounded rather risky. You see, for me, it is very, very important that I have a great track record.

Now at the beginning of my trading career, I would have forced these trades. I would have said, “Oh my gosh, I cannot be done working after one hour,” because this is what happens sometimes in the morning. I sit down in front of the computer at 8 o’clock, which is half an hour before the open, and I run through the PowerX Optimizer, and don’t find anything.

Now, one of the things that of course, I do every single day, is that I check my open positions, and in the PowerX Optimizer, I have my watch list.

So first I look for new trades, and secondly, manage my existing trades. I don’t, however, need to overmanage my account when there are days where there is nothing to trade. What I used to do way back when I was still new to trading, and nothing would come up, I would adjust my criteria.

So anyhow, in summary, there will be days when you’re all excited, but you see, in order to make money with trading, two conditions have to be met.

Number one, you have to be ready, and number two, the markets have to be ready. You may be ready but if the markets are not ready, you got to sit on your hands. The beautiful thing as traders, it’s not that today is the trading opportunity of a century. No, tomorrow there will be more trades, on Wednesday will be more trades, on Thursday. Every single day I’m running the scanner according to PowerX Optimizer and I will find more opportunities to trade.

So today, one of the hardest lessons, and this is why I wanted to share it with you, sit on your hands. Anyhow, if you enjoyed this video, do me a favor and click on like so that more people will see it.

USD/JPY remains depressed below 109.50 as US Treasury yields retreats

The selling pressure surrounding the US dollar keeps USD/JPY off the cliff in the initial Asian trading hours. The USD/JPY pair touched the intraday high of 109.79 in the New York session, however, failed to sustain the level.