A coronavirus stock market crash: “Is it possible?” a friend recently asked. I think he already knew my answer, but I could tell by his awkward grin, he was hoping I’d reassure him…I didn’t.

Obviously, the answer was, and is: “Yes, it definitely could be a catalyst for a market crash.”

If you don’t know me, I’m not one to make wild stock market predictions…but the Coronavirus has definitely caught my attention.

Well, to put it as simply as I can: Manufacturing

Still not sure what I’m getting at?

Well, let me remind you where the Coronavirus originated: The manufacturing powerhouse of the globe, China.

Whatever device you’re reading this on (your cell phone, tablet, laptop, etc.) was likely manufactured in China… or at least some of its components.

Chinese manufacturing accounts for around 20% of the total global output.

Are you starting to see the picture I’m painting?

It’s not “The Starry Night” but more like “The Scream.”

If the Coronavirus continues to spread, it could have serious implications for the global economy…

But as I’ve learned (and had printed on my coffee mug): I should trade what I see, not what I think.

That’s because throughout history, oddly enough, the markets have actually fared rather well during these types of events… and the immediate reaction to a pandemic might be to sell the farm.

Apple relies heavily on the Chinese company, Foxconn, for its manufacturing of iPhones, iPads, and Macs.

Foxconn has already experienced delays and analysts are predicting Apple will see at least 5%-10% fewer iPhone sales than previously projected before the outbreak.

AAPL currently accounts for 7.44% of the Dow Jones Industrial Average, second only to Boeing.

So if this outbreak isn’t contained soon, AAPL has the potential to act like a lead weight on the index. That’s not to mention all the other stocks that also are feeling the negative effects of the virus.

If today was the top, most people would be caught like deer in headlights (would you?).

In fact, my friend had NO CLUE you could even make money in stocks when the market goes down until our recent conversation.

I think that’s largely due to the fact that for over a decade it’s been easy money. We’ve had a few blips (like December of 2018) but no true sustained downside action.

Now, onto my next example, the hottest stock of the year: TSLA 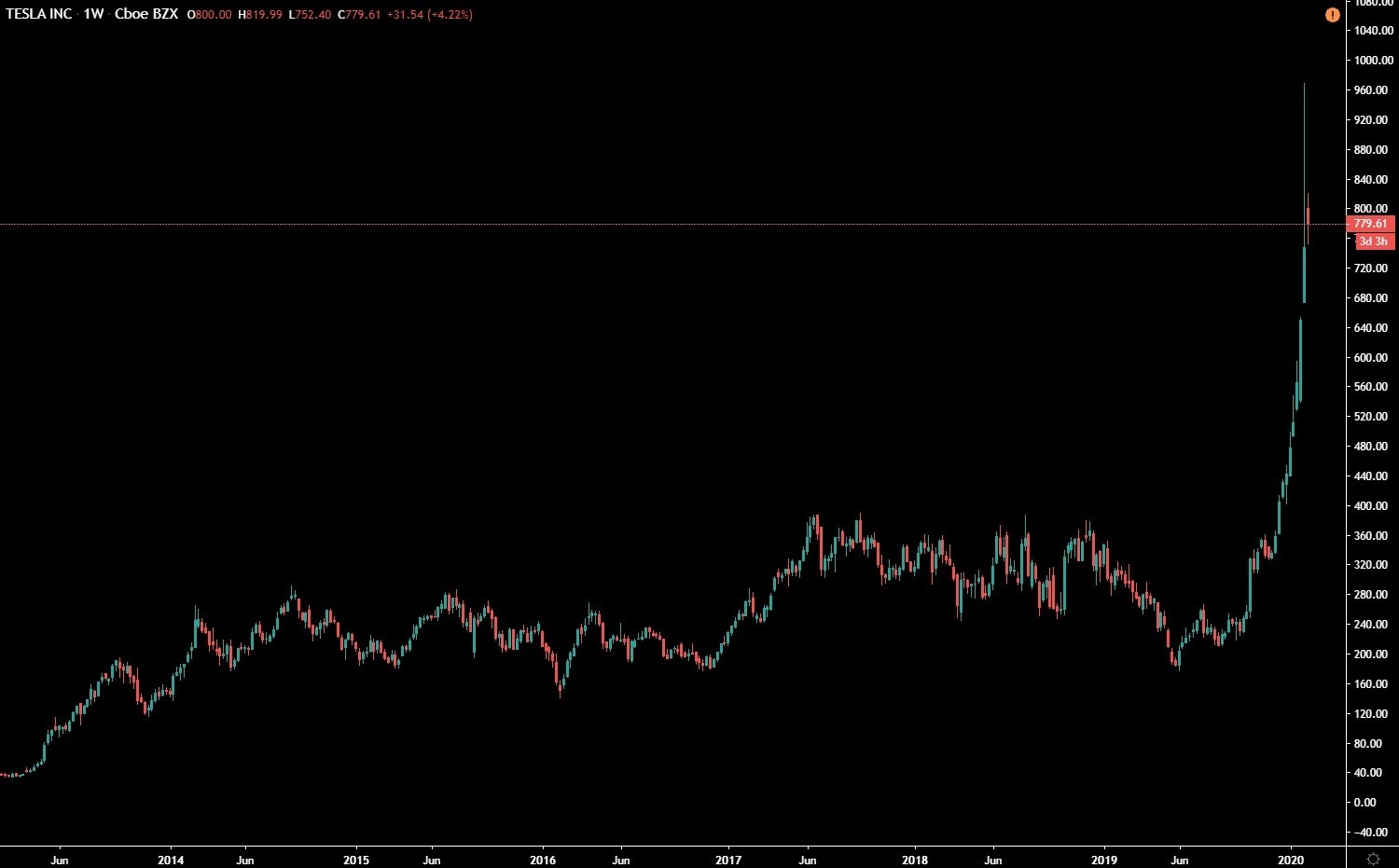 A lot of this was fueled by the launch of their factory in China that went live at the end of last year.

But TSLA too has started feeling the negative effects, having to temporarily close China stores and reporting delays in Model III deliveries due to the outbreak.

These announcements were attributed to a massive downside move the stock saw last Wednesday, down 17.2%. This just on the heels of the stock soaring to an all-time high of $968.99 just two days before.

That Wednesday was the biggest single-day drop it had seen in 7 years. I can guarantee some people lost their shirts on that two-day swing.

That’s the problem trading based on the news cycle, fear of FOMO… it’s just impossible to be consistent!

So with just two examples, are you starting to see my point?

My friend definitely did after I gave him this same speech.

After getting him all “wound up” I did try and ease his mind in the event there is a “coronavirus stock market crash.”

I told him that in the “Black Swan” scenario (which I’m still optimistic is unlikely) I could show him how he could protect his family’s financial future.

So I gave him a copy of my book as “homework” and access to the PowerX Optimizer and suggested he check out one of my on-demand training sessions.

I made him a promise that after that, he would be at a point where he could trade with absolute confidence and give himself the means to make consistent income in the market, no matter if it was going up or down.

And honestly, I nor anyone else at this point knows what is going to happen. I hope they announce a cure very soon (like today)!

But in the event that doesn’t happen, he and I will be ready… will you?

Have you ever heard this saying?

“It took stairs up and the window down.”

It’s referring to the movement of a stock. When stocks start to sell, it can happen in a flash (i.e. the window)!

That’s why in a bear market, you have the potential to see massive gains in a short amount of time.

Now by no means am I hoping for a bear market, especially under these circumstances.

But as the quote in The Art of War says, “In the midst of chaos, there is also opportunity.”

So no matter what happens I will be ready and I hope you are too.

USD/JPY in multi-day lows around 109.70 amid coronavirus woes-led risk-off

The safe-haven yen is drawing bids in Asia, as the risk-off sentiment remains the key theme amid growing concerns of the negative economic impact of coronavirus outbreak. USD/JPY holds the lower ground near 109.70 amid losses in the Asian equities, S&P 500 futures and Treasury yields.

USD/JPY in multi-day lows around 109.70 amid coronavirus woes-led risk-off

The safe-haven yen is drawing bids in Asia, as the risk-off sentiment remains the key theme amid growing concerns of the negative economic impact of coronavirus outbreak. USD/JPY holds the lower ground near 109.70 amid losses in the Asian equities, S&P 500 futures and Treasury yields.

UK jobs preview: 3 reasons why Cable could bounce even if wage growth slows

Lower wages are bad news for workers and usually also for the pound – but these are abnormal times, and sterling may shine in response to the UK's December jobs report. The focus is on wage growth