For traders coming from other markets, you may know the importance volume has when making trading decisions. However, for years, volume has generally been ignored by forex traders because it has been so hard to ascertain. There is no central exchange for currency transactions, so there is no perfect way to measure the amount of volume being actually traded. These days there is enough information out there to determine daily and even hourly buying and selling pressure.  There are gauges of volume that traders can easily access, whether they be from charting software tools, the FX broker or a Bloomberg terminal.

Essentially, volume is important because it can prepare traders for breakouts and confirm them when they happen. Secondly, volume indicators can confirm the strength of trends, for example, a substantial move in a light trading environment can be reversed quickly and dramatically. Thirdly, volume can identify reversals. To find this specific trading opportunity, traders can look for times when volume is decreasing while at the same time make an estimation for when a trend is starting to stall or waver. The difference between the second and third example is that in the third example, the reversal doesn’t necessarily occur with low volume; it is witnessed in an environment of renewed buying/selling interest after a period of declining trading activity, consolidation or exhausted price behaviour.It is the volume’s trend that is broken rather than the price trend. Incorporating volume into your strategy is important but it should be used in combination with other technical indicators such as support and resistance levels, MACD and overbought/oversold signals.

Below is the AUD/USD chart over the past six months. It includes RSI, MACD and volume indicators. 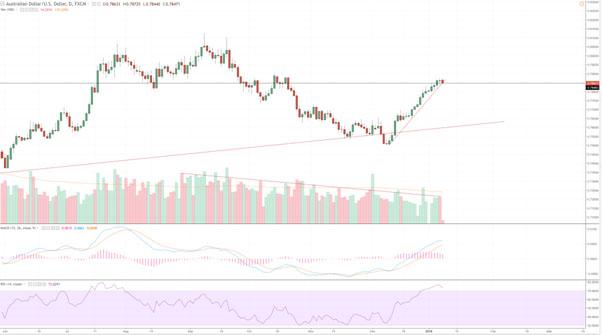 We can see that since late September, after buying pressure exhausted itself, we can see that the level of interest in the Australian dollar against the US dollar declined. This interest has been both for buying and selling. In fact, since the 10th of December, when the price started retracing higher, volume has decreased further, perhaps expectedly, over the holidays.

What does this all mean? Firstly, I would say that as the currentmove higher is founded on weak buying interest, the rally is on shaky ground. It might not take much to knock the aussie off its perch, especially as it’s reached now an overbought level indicated by the relative strength indicator (RSI). Secondly, I would say that as volume has fallen since September, in the coming days or weeks, we may see a set of new price drivers set the tone for the pair’s next move. The current volume trend says to us that there is little new information impacting the direction of the currency pair, or in other words most market information has already been priced in. It’s impossible to determine when that new driver will come, but when it does, we may see some relatively dramatic price behaviour, especially if it is a shock that wakes traders out of their holiday complacency.