The Graph price will face a decision as it slides towards a confluence of support. Based on GRT’s reaction here, it could either surge higher or enter a corrective phase.

The Graph price at crossroads

The Graph price has suffered a bearish fate ever since it hit a new all-time high of $2.89 on February 12. Since this point, GRT has pulled back nearly 55% and is currently trading around the $1.52 level.

However, the Graph price’s clockwork-like price movement since February 23 has formed two swing highs around $2.11 and three swing lows near the $1.50 level.

A horizontal parallel channel evolves when the pivot points are connected using trend lines. This pattern does not have an inherent bias, and hence, the breakout isn’t confirmed.

A bearish breakdown of the setup forecasts a 30% downswing to $1.05, determined by adding the channel’s height to the breakout point at $1.50. 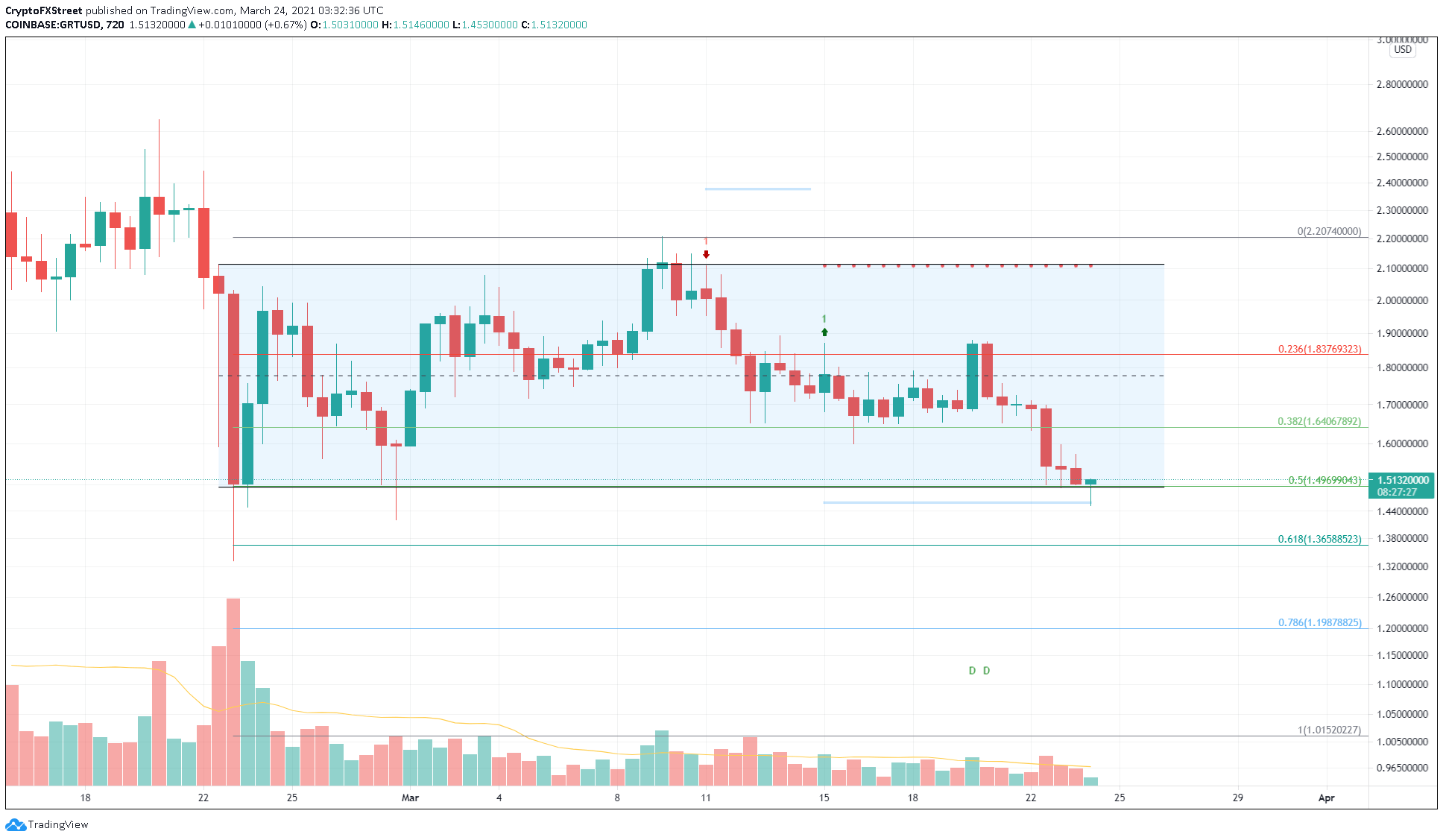 Adding credence to this bearish outlook is the contrast between the overhead barriers and support levels for the Graph price portrayed by IntoTheBlock’s In/Out of the Money Around Price (IOMAP) model.

IOMAP cohorts reveal that roughly 460 addresses purchased 18.17 million GRT at an average price of $1.47. So, a sudden spike in bearish pressure leading to a decisive close below this level could trigger a sell-off from panicking investors, further supporting the pessimistic outcome for GRT.

The daily active addresses transacting on the GRT blockchain reduced from 7,326 to 1,554, a 78% drop in the number of unique addresses. This reduction signifies investors’ disinterest or fleeing capital, which paints a bearish picture for the Graph price.

Likewise, the network growth metric, which tracks the blockchain’s user adoption, has declined 80% since February 12, adding to the already grim outlook for GRT.

However, considering Momentum Reversal Indicator’s (MRI) breakout line at $1.45, a bounce seems likely. Adding credence to this upside move is the presence of the 50% Fibonacci retracement level around $1.49, coinciding with the setup’s lower trend line.

Hence, this confluence of support ranges from $1.5 to $1.45, provides stable grounds for a lift-off. Therefore, a spike in buying pressure could propel the Graph price by almost 19% to the horizontal parallel channel’s middle line at $1.78.

A 22% upswing to the upper boundary at $2.11 seems likely if the bullish momentum persists.