The confusion in investors' minds continues to feed through to the marketplace as the early week rally peters out and Friday sees a turnaround. With the rally reaching around 7% for the S&P 500 (SPY) that is no surprise. Bang in line with historical averages for a bear market rally. Of course, sentiment was not helped by worries over advertising spending. Again a recessionary feature and going back to the old newspaper and media industry we can take our lessons from the past and see how ad spending drops sharply in a recession. SNAP warned of this last night after the close and managed to drag the whole advertising industry down with it. The only problem is in this time frame the advertising industry involves some of the mega tech names, Google, Meta, Twitter, etc which all saw sharp falls in their share prices. Speaking of Twitter it released its results on Friday before the open and confirmed the setup from SNAP. Twitter missed due to a strong dollar and weakening advertising spending. Looks like Elon has or is paying too much if that one ever gets settled. Speaking of Elon though and Tesla (TSLA) had sought to keep the rally going when it released a solid set of earnings mid-week. The EPS beat was largely down to dumping Bitcoin but revenue held up pretty well in the face of some serious challenges from Shanghai lockdowns. Forecasting revenue to remain on target for the remainder of the year was also a neat trick and analysts rushed to upgrade their numbers. We joined the upgrade party when moving our 12-month price target from $400 to $550. We were impressed with the pace of growth but did highlight that a lot of that growth came outside of the auto space with energy contributing well. However, demand looks like it will hold up so we updated both our DCF and P/E modeling which resulted in an upgrade to $550. You can read about it in more detail here.

Now back to the state of play. Markets remain focused on a recession and with earnings season so far not being too bearish the rally was set continue this week. Bond and money markets also played their part with yields falling. Equities took comfort from the money markets pricing in a first-rate cut in early 2023 now.

Inflation expectations, based on 5-year forward inflation swaps, are pricing inflation below the 2018 cycle peak. pic.twitter.com/f3W1ed5vqN

So markets rallied on the assumption of a goof news recession. Markets are pricing in a recession which does look increasingly likely. But they are pricing for a mild recession. Time will tell how accurate that conviction is but we do feel the inflation expectations above are too low and could prevent challenges. But for those looking for confirmation of whether a US recession is likely or not a little chart storm below.

The manufacturing recession is here. pic.twitter.com/3ZHcTTHwbm

So it does look more and more likely we have or will soon enter a recession. Not too long to wait now until the US GDP is released. There is still some hope out there but it is a fading light. American Express (AMX) sees strong spending when it announced results today.

Consumer spending reminder, is 70% of the US economy. But with sentiment reading so low it seems inevitable that spending will fall. As if things were not bad enough we are only one trading week away from August and that is not a strong month for equities.

So what happens to earnings in a recession? Well, they fall naturally. Already we are seeing earnings estimates pull back with downgrades on the increase and estimates falling.

The aggregated earnings outlook looks steady but, under the hood, estimates are eroding. Here we see the percentage of companies in the S&P 500 with rising estimates from three months ago. There clearly is slippage here. pic.twitter.com/LJ5Fea3WhX

The key question though is how much is priced into equity markets already. After all, the recession is on everyone's lips right now so this might be the most advertised and anticipated recession in history. Market positioning had already moved to extremely bearish levels. The contrarian pain trade is that we have already hit the bottom, priced in a recession and it proves relatively mild. Or on the contrary, the recession is much worse than feared and inflation remains elevated for longer. It is unlikely that the current assumption proves correct. Currently, markets are pricing for a mild recession, rate cuts in early 2023, and corporate profits to remain in growth mode. It feels uncomfortable being in the consensus and it rarely delivers profits.

Next week is huge and will likely set the direction for the remainder of the year. If corporate profits hold up in the face of the China crisis and lockdowns, strong dollar and inflation as well as collapsing consumer demand then we must be long will be how institutional investors will think and then act accordingly and buy buy buy. Below is the biggest list of earnings but in the second list, they are also some pretty notable names so it is a huge week. 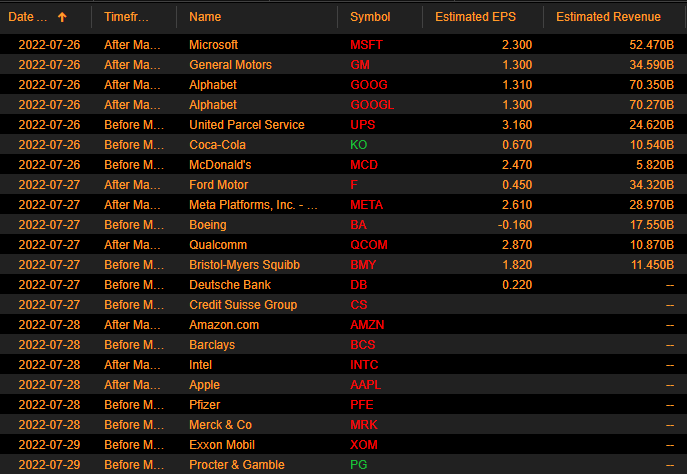 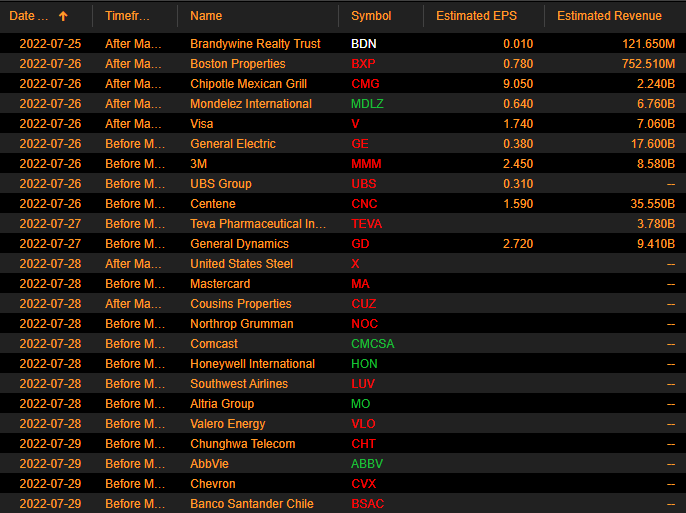 Next week we will get confirmation on whether or not the US is actually in a recession. We had a negative Q1 so one more print means a technical recession. 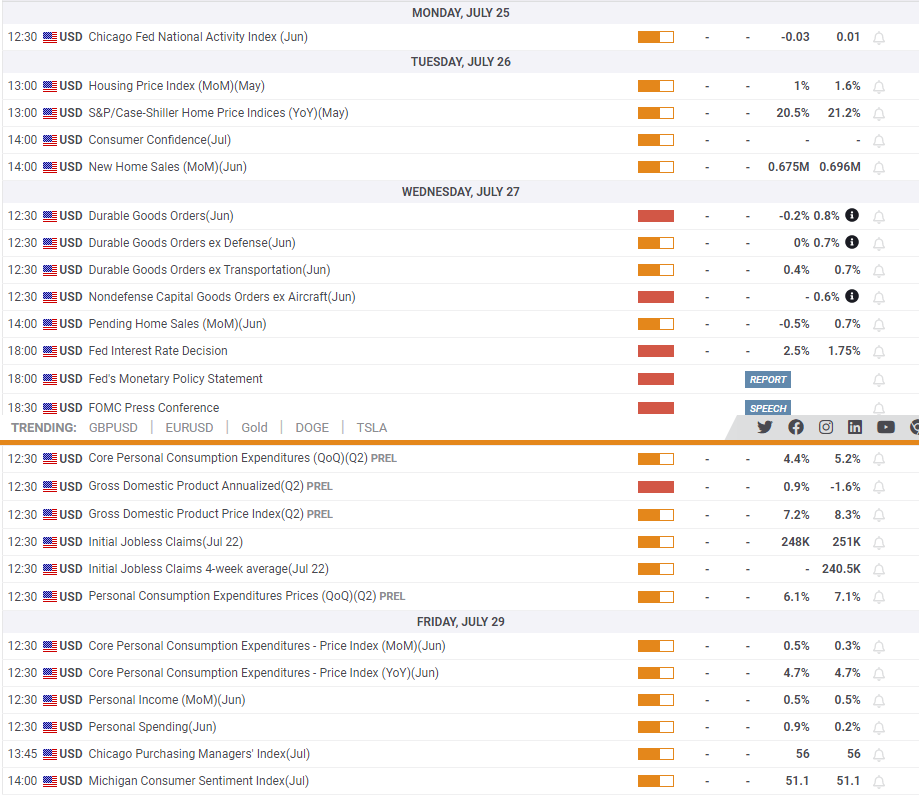 I've left the forecast to the end this time as next week will be earnings dominated. This will not be a technical week. EArnings and fundamentals will dominate the market direction. But the key levels are worth noting. The chop is still in play as markets look for direction. This is highly visible in the advancing/declining issues. We keep moving from over 90% advancing to less than 10% on the down days. This shows how macro-dominated the market is, it is either all or nothing. Everything goes up or down together, there is little individual stock out or underperformance. The choppy range is also in evidence on the chart. We have yet to fill the gap to $401 despite breaking above the first resistance at $395. We still feel this market is itching to go higher and test the $415 level but earnings will set the direction. The market is now pricing in Facebook Meta to be terrible after SNAP so there is potential there for a surprise higher. Similar to Google Alphabet. 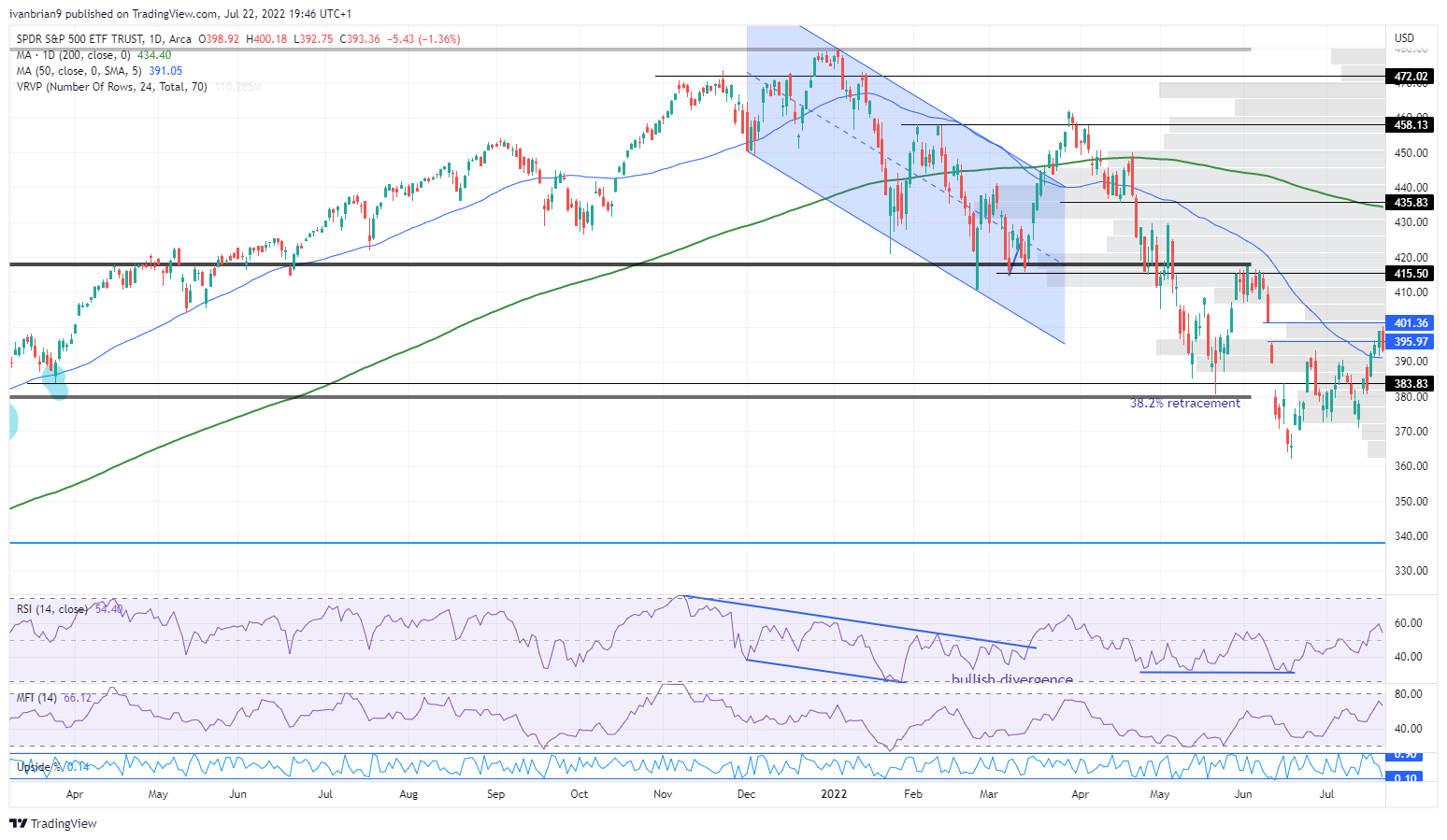