The USD/CAD had its best week since the pandemic panic last March sent the pair briefly above 1.4600.

In total, the USD/CAD added 2.3% from Monday to Friday, but the bulk of the move, 2%, came after the Federal Open Market Committee (FOMC) announcement on Wednesday.

The pair joined the general scamper to the US dollar in the aftermath of the Fed’s vastly improved prognosis for the US economy and tacit admission that dismantling the bond-purchase program is the next item on the policy agenda.

Most commodities are priced in US dollars, so as the dollar strengthens commodity prices fall per unit of value. The BCOM index is generally an early indicator of economic growth, rising in anticipation of an expansion and then temporizing or falling once growth is firmly underway.

West Texas Intermediate (WTI) rose 0.6% on the week to $71.02 from Monday’s start at $70.58, despite the general increase in the dollar. The barrel price of WTI is up 47.6% from January 4 and 96.4% from its open on October 30 last year. Unlike most commodities whose product use cycle involves ordering far in advance, oil demand is closer to its more flexible supply, and prices tend to rise as an economic expansion proceeds.

Currency markets bought the dollar in all pairs after the Wednesday Fed decision.

The euro lost 131 points on the day, closing at 1.1995, its first finish below 1.2000 since April 16. The sterling, aussie and kiwi dropped to multi-week lows. The USD/CHF did the reverse, and the US dollar added to its gains on Thursday and Friday.

The lone exception to the dollar run was the USD/JPY which rose on Wednesday and then faded Thursday and Friday. The primary reason was that the dollar had already gained 6.7% this year against the yen while rising just 0.7% versus the euro, losing 3.4% against the sterling and 4.6% to the Canadian dollar.

The Fed’s acknowledgement of a strengthening US economy and inflation is a major policy shift, even if the timing may not be clear until the bank’s annual August conclave at Jackson Hole, Wyoming. 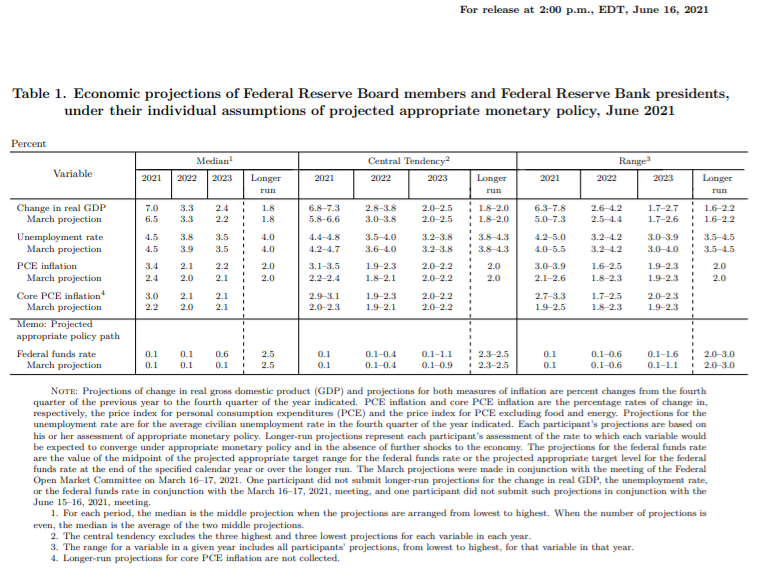 The estimate for the fed funds rate at the end of 2023, which had been unaltered in March at 0.1%, moved to 0.6%. Federal Reserve rate increases, unless under emergency conditions, come in increments of 0.25%, implying two hikes that year.

In the ‘dot plot’, which charts the individual projections of the FOMC participants, all 18 saw rates unchanged this year. In 2022, 11 members had rates remaining stable, five saw one hike, and two suggested two rate increases. For 2023 only five had rates unaltered, two members foresaw one hike, and three each had two, three and four increases. 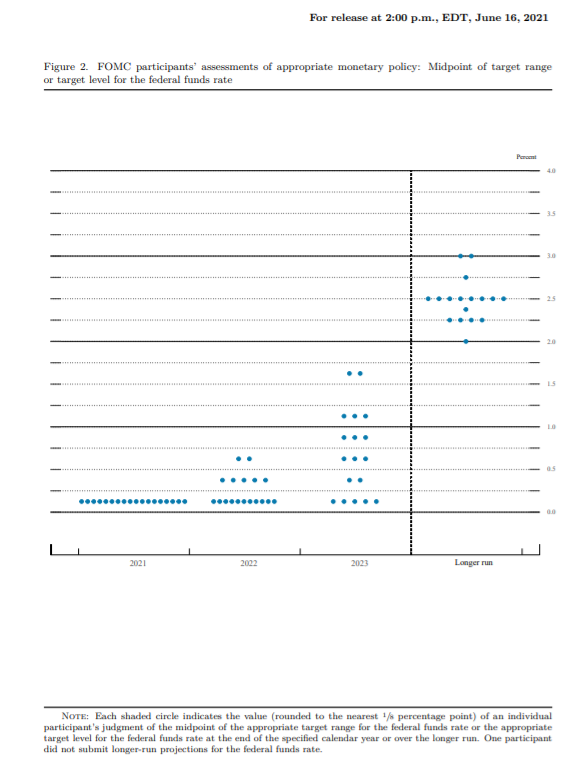 In another sign that the credit markets believe the Fed has changed policy, the yield on the 2-year Treasury closed at 0.205% on Wednesday, its highest in over a year and the first finish above 0.2%. Yield gains continued on Thursday with a 0.213% finish and a move to 0.254% on Friday.

The short end of the yield curve, particularly the 2-year, had been the main focus of the Fed’s bond-buying program and had barely moved in over a year, while the 10-year return had climbed 83 basis points to 1.746% from December 31 to March 31.

American equities suffered their worst week since January as the prospects of higher rates moved from the theoretical to the factual.

Canadian data was unexceptional. Housing Starts in May continued their strong performance. Consumer prices rose marginally in May, but annual rates were considerable below those in the US. There was no market impact.

In other economic data, US Retail Sales in May dropped 1.3% on a -0.8% forecast though the prior month was revised to 0.9% from flat. Industrial Production rose more than expected in May, but April’s gains faded to almost nothing. Initial Jobless Claims for the June 11 week rose unexpectedly above 400,000.

These statistics underlined the difficulty of providing accurate information quickly in the unusual circumstances of the current economy.

The Federal Reserve has changed its rate policy. It may take until the end of the summer for details and specific timing to emerge.

Currency adjustment will happen much faster.

Fundamental and technical prospects for the USD/CAD are again aligned, bias has clearly shifted higher.

The long decline is over, and the speed of the rise will largely be determined by the technical formations encountered. As the USD/CAD moves to the various resistance levels, the conditions for a stop-loss led short squeeze will repeatedly arise.

While the official announcement of a reduction in the Fed bond-buying program, let alone the complete end of intervention, may take until the end of the year or beyond, its practical impact has been immediate.

The rebound from resistance at 1.2480 on Friday will be repeated at different levels over the next weeks, but the upward direction of the USD/CAD is unlikely to change.

Economic data will play a small part in the week ahead.

Canada’s Retail Sales figures are for April and out-of-date. The US information from Durable Goods Orders and Personal Income and Spending are variations on prior releases. The Michigan Consumer Sentiment Index for June will be interesting but of no trading import. Initial Jobless Claims no longer move markets.

Canada’s economy remains under a series of limited lockdowns and the opening of the US border to tourist travel has been delayed until at least late July. The contrast to the wholly opened US economy may be as much of a psychological drag on the loonie as the actual economic restrictions.

Momentum indicators are strongly positive. The MACD, Relative Strength Index (RSI) and True Range are buy signals. The USD/CAD is almost two figures below the first (23.6%) Fibonacci level of the March 2020 to last week decline and the ascent to that level should come rapidly.

The 100-day moving average (MA) was crossed on Friday, which is another indicator of further gains. The 21-day MA has turned higher providing support just under the line at 1.2145.

The technical assessment of the FXStreet Forecast Poll ignores the fundamental change in the US dollar interest rate picture.

EUR/USD clings to 1.18 as tensions mount ahead of the Fed

EUR/USD is trading close to 1.18, marginally lower as investors eye the Federal Reserve's decision. The Fed is likely to refrain from any signal of tapering its bond buys. Covid headlines are eyed.

GBP/USD drifts lower below 1.3900 amid firmer US dollar

GBP/USD drops towards 1.3850 amid resurgent demand for the US dollar and a cautious mood. The pound benefits from the fall in UK covid cases and fresh Brexit optimism after the EU paused legal action against the UK over the NI protocol. The Fed is awaited.

Gold’s battle with $1800 extends, levels to watch ahead of Fed

Gold price is rising back above $1800, defending the key support area around $1798 amid a cautious market mood heading into the Fed decision. The sell-off in the Chinese stocks seems to have paused, offering some support to the Asian indices.

Theta price printed a new correction low on July 20, undercutting the May 19 low of $3.70 and the 78.6% retracement level of $3.54 before rallying 100% into yesterday’s high. The convergence of key resistance levels prevented an extension of the rally.

Tapering is not a question of if, but when – and the timing of the Federal Reserve's announcement to create fewer dollars may have to wait longer. The world's most powerful central bank has been buying bonds at ....