Today we have a good example of traders hewing to position-adjustment despite data releases that should have caused price action in the opposite direction. First, US Q2 GDP was revised up from 3.0% to 3.1% yesterday, but remember, Q3 is probably going to disappoint, as we demonstrated yesterday. We shall see if the Atlanta or New York Feds raises their dismal Q3 esti-mates after Q2 came in so rosy. The "good" GDP number, even if backward-looking, "should" have been dollar-favorable. It wasn't. The dollar did not gain on the release as traders persisted in reducing long positions.

Similarly, today the euro did not fall on release of unfavorable inflation data. While the US was beating expectations, the eurozone was falling short. Forecasters had expected inflation to be on the rise, but the eurozone Sept number is the same 1.5% as in August. with core down from 1.3% to 1.1%. Individual countries disappointed, too. Germany got 1.8%, the same as the month before and failing expectations for 1.9%. Spain had a drop from 2% to 1.9%. France was steady at 1%. Draghi may be correct that infla-tion is on the path to meeting the ECB's 2% target, but he is also right that the level is not yet sustaina-ble. The FT adds a discordant note: the ECB economic staff warns that "headline inflation could retreat to as low as 0.9 per cent in the first quarter of next year" because some of the components that had driv-en prices high (energy and food) are falling out of the annual comparison.

Another eurozone negative is the looming Catalonia referendum, which Spain says is illegal and is try-ing to impede. Political disarray "should" be a euro-negative. Bloomberg reports "Investors so far have shrugged off what has become the gravest constitutional crisis to befall Spain since the country returned to democracy after the death of dictator Francisco Franco four decades ago. Spain's benchmark IBEX 35 index has outperformed peers this year while the extra yield that investors demand to hold Spanish bonds instead of German debt is little changed from last September. 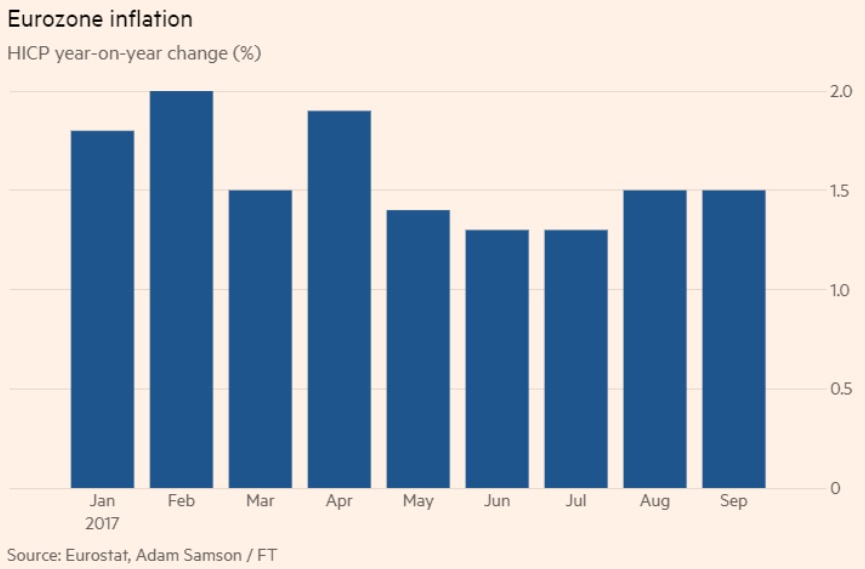 "It may be time investors started paying more attention, said Angel Talavera, an economist at Oxford Economics in London. While Spain won't recognize the results of the referendum, the push for state-hood could eventually hurt the economy, discourage investment and raise questions about Rajoy's abil-ity to govern. Money doesn't like uncertainty.... At some point investors will wake up to the realization that there could be a longer-term impact.'"

If we were looking at the eurozone inflation data alone as the single most important factor driving the euro up on expectations of tapering, this shortfall "should" be euro-negative. But the release of the data did not give pause to the rising euro, nor did the coming referendum.

When data fails to drive a currency in the logical direction, we can hypothesize that traders already knew the outcomes and had discounted them, or something else was more important. In the US, the other important thing was the tax plan, which should have an overall positive effect on the dollar—unless traders expect it to fail.

The third possibility is that traders saw on the charts that the dollar was becoming overbought and they should pare long positions. The euro reaching the 38% Fibonacci retracement level, as we show in the chart above, is one indicator. Another is the dollar breaching the classic 20-day Bollinger band "normal" limit. It is our observation that a currency breaks the Bollinger band for only about three days before correcting. In other words, it's conceivable that analysts are attributing price action to funda-mentals that are, in practice, irrelevant. This is not to say fundamentals are always irrelevant, just that they are sometimes ignored when positioning has become extreme.

About that tax reform/tax cut "plan" the president and leading Republicans want to pass: first, the state-ments made about it are riddled with lies. Trump said he would not benefit. He would, and it's obvious if the alternative minimum tax and estate tax are repealed. The NYT has a cute story on how Trump would have saved over $1 billion under the new rules if they had been in place in 2005, the year of the one tax return we have.

TreasSec Mnuchin said it would pay for itself. It won't. It will add at $2-3 trillion to the cumulative deficit. Worse, he had the Treasury remove a paper showing that labor pays 18% of the corporate tax while owners of capital pay 82%, numbers similar to other studies. Mnuchin wants to show that labor's share is higher so that a corporate tax cut will be of greater benefit to workers.

Second, the plan proposes three tiers for individuals, but without naming the cut-off points. Third, the plan does not address corporate loopholes that make the effective tax rate for many corporations down under 10% and not the 35% notional rate.

We don't intend to follow every twist and turn in this saga, because that way lies madness, but the point is that the politicians are making a terrible mess of things, again, repelling all but those with strong stomachs from any interest in public affairs. Maybe that's the goal. The topmost thing the public cares about is medical cost deductibility, and deductibility of state and local taxes when filing federal tax forms. That one already looks fatally wounded, meaning it will be "given back" in return for something the money-grabbers want.

The money-grubbers are the lobbyists, the denizens of the swamp Trump promised to drain. Trump's lack of leadership sets the lobbyists free to pay for influence on the tax plan. A Quinnipiac poll on Wednesday is starting to get some traction. One of the findings: 60% vs. 38% say Trump lacks leader-ship skills (hence the Obamacare repeal fiascos).

To get back to reading mind of the FX market, does all this mean traders foresee the tax plan will fail? Maybe not, but they can certainly expect the process to be dirty as well as drawn-out. Hopes for a re-turn of the Trump reflation trade will be contaminated by lies and by Trump himself.

But there's always something else coming around the corner. Today it's personal income and spending, with the PCE deflator, the Fed's key inflation indicator. The two hurricanes might be starting to skew the numbers to the downside. The important data point is the core PCE deflator, forecast (Bloomberg) to remain at the same 1.4%. We continue to think that inflation will rise more or less automatically as the natural result of rebuilding after natural disasters, even if the effect is spotty and perhaps transitory. Given the forecast for no inflation to speak of, yields should continue to retreat and the dollar along with them.

Or maybe not. Bloomberg notes that the dollar is responding more to yields than to inflation data. See the chart. 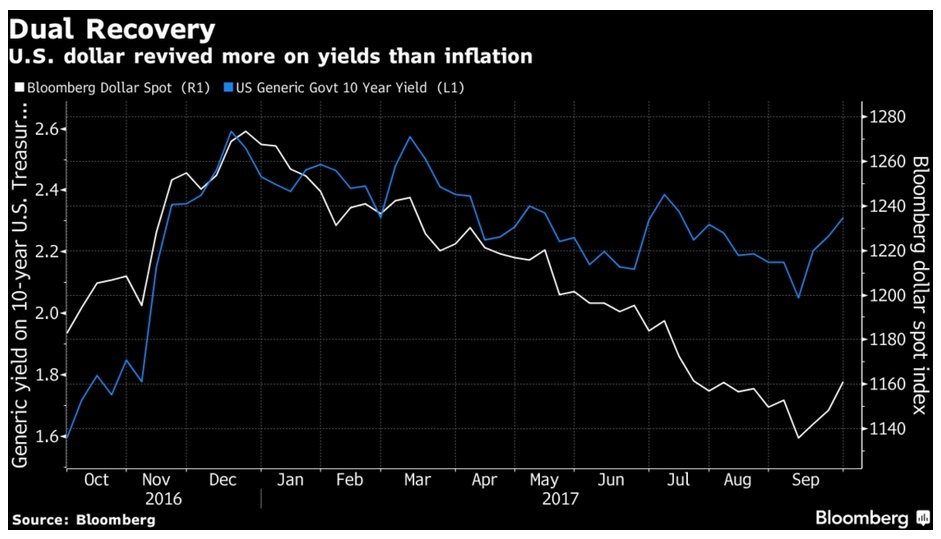 Today's inflation data may be irrelevant now that the Fed has spoken. And PCE today can vanish in one day. What about next week? The question is whether the pending Fed rate hike and tapering is such a big deal that it will override all the other factors. We think that on the whole, it will, but not until the euro rises to scary heights, probably a test of the last intermediate high at 1.2034.

Tidbit on energy costs: The Daily Shot, a compendium of research papers from big banks and others, has a detailed story about oil, showing a nearly full recovery from Texas hurricane Harvey and noting US exports keep rising and are at an all-time high. The spread between WTI and Brent is $5-6 (from $1 to $3 over most of the past year), encouraging exports. See the chart. This is going to lead somewhere interesting. 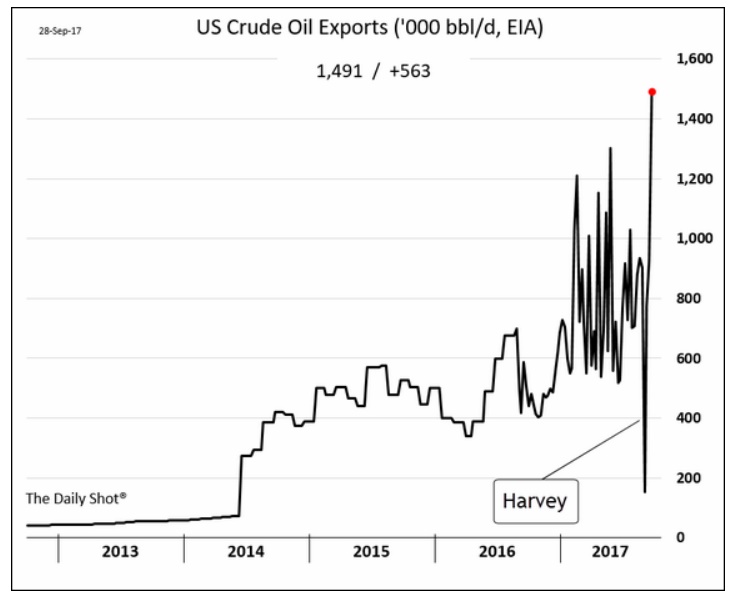