Resisting gravity and set to skyrocket? GBP/USD has weathered hawkish tunes from the Fed, strong US jobs and BOE caution. Can it move higher now? The next moves hinge on critical US inflation figures, Britain's covid advantage and UK growth data.

This week in GBP/USD: BOE remains cautious, Fed less so

Toeing the line: the Bank of England has left its policy unchanged, refraining from tapering and labeling inflation as transitory. Only one member, Michael Saunders, voted in favor of tapering down the BOE's bond-buying scheme. The absence of additional hawkishness and a suggestion that monetary policy would only be "modestly" tighter initially sent sterling lower. That did not last too long.

The pound benefited from an upgrade to Markit's Services Purchasing Managers' Index for July and enjoys an advantage over the US when confronting the Delta COVID-19 variant. Cases in Britain maintain their downward trajectory while they are relentlessly rising in America. Moreover, the UK population is vaccinated at higher rates than those in the US. 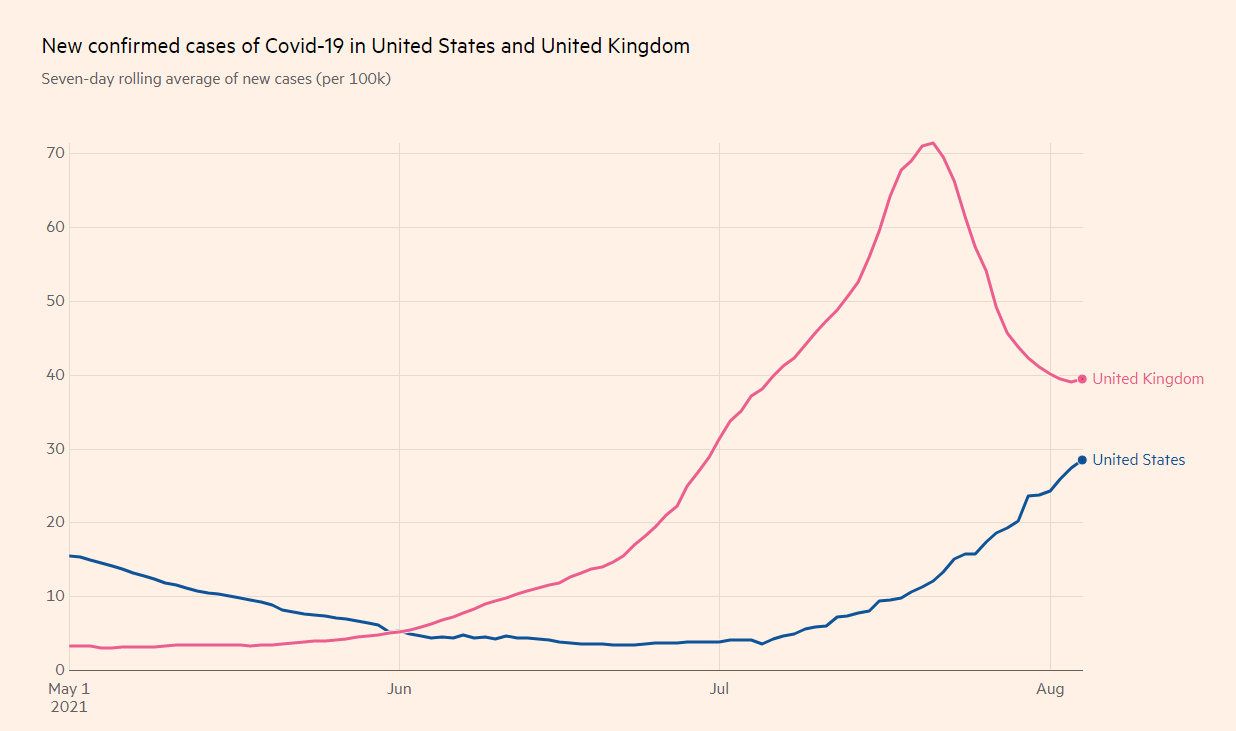 GBP/USD's strength is especially telling given the hawkish twist from several Federal Reserve officials, who are taking bigger steps toward tapering. Fed Vice-Chair Richard Clarida said an announcement about reducing purchases could come this year. San Francisco Fed President Mary Daly opened the door to cutting buys – not only talking – already in 2021.

The dollar reacted positively to news that the Fed would bring down its $120 billion/month scheme, but GBP/USD dropped only when US Nonfarm Payrolls came out – and only in a limited manner.

The world's largest economy gained no fewer than 943,000 positions in July. Moreover, it came on top of upward revisions worth 119,000 and alongside a robust increase of wages by 0.4% MoM. On a yearly basis, earnings are up 4%, pointing to inflationary pressures that may catch the Fed's eye. The dollar soared to higher ground across the board – yet once again, GBP/USD held up better than its peers.

In Washington, lawmakers made progress in advancing the bipartisan infrastructure spending bill, but more hurdles remain. While President Joe Biden got Republicans and moderate Democrats on board for one bill, he needs to make progress on a larger one to enable progressive House Dems to support it.

Overall, the pound showed its strength in a week that could have sent it lower.

Has "Freedom Day" been a flop? The grand UK reopening on July 19 has found Brits either "pinged" – required to self-isolate – or hesitate to return to normal life. That may have been somewhat disappointing to growth prospects but has contributed to the fall in covid cases. However, that drop may have stalled.

Apart from following the infection numbers, investors will want to see more Brits receiving their second jabs. While over 70% of the population is fully vaccinated, second doses have been administered to only 58%. A single shot is less effective against the highly transmissible Delta variant.

Investors will want to see more blue and less pink and red in this chart: 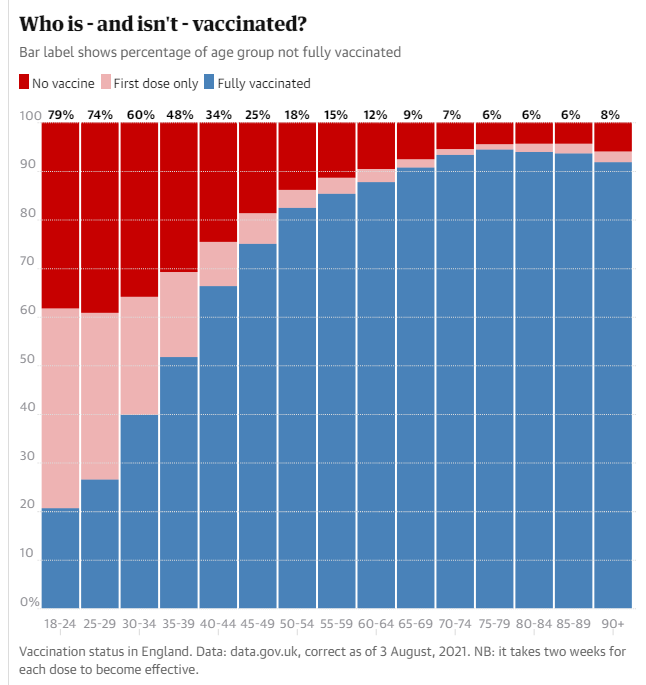 The main event on the economic calendar is the first release of second-quarter Gross Domestic Product figures. After a squeeze of 1.6% in the first three months of 2021 – due to a nationwide lockdown – a sharp rebound of some 5% is on the cards, according to the Bank of England.

Brexit is benefiting from the summer lull, and Brits' ability to travel for a holiday in France – after the most recent changes – also helps ease cross-Channel tensions. No Brexit news is good news for sterling.

Monthly GDP data for May somewhat disappointed with an increase of only 0.8%, but an increase in consumption has likely supported the expansion in June. Industrial output statistics will also be of interest.

The Fed sees every covid wave as having diminishing damage on the US economy – but what if the Delta wave wreaks even more havoc? Daily cases are marching above 100,000 per day from a low of 15,000 in June. They are hurting mostly undervaccinated areas, which are more common in the US than in the UK and Europe.

The amount of doses has risen from the lows of around 500,000 but remains well below the peak of some 3.3 million. A pickup in inoculations would help cheer investors. 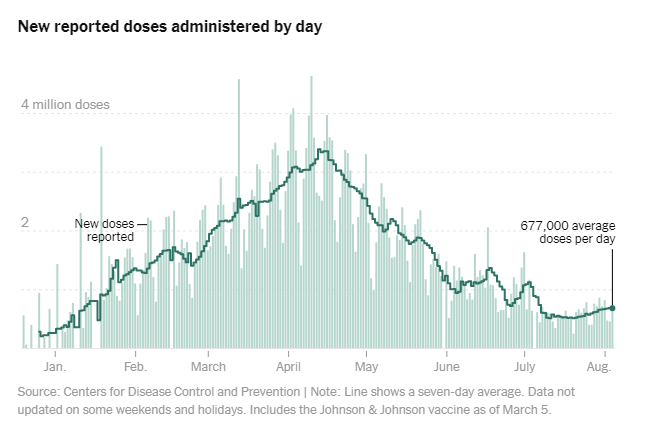 The advance of the $1 trillion bipartisan bill on Capitol Hill may become more important – especially if it brings along progress on the Democratic $3.5 trillion package, which is far more reaching. Contrary to Europe, American lawmakers are set to remain busy in August. Markets currently want to see it before they believe it.

That contrasts with a forward-looking approach on other topics such as inflation. The Consumer Price Index (CPI) report for July stands out on the calendar, with economists unsure if inflation has already peaked or could still rise. Monthly increases are set to moderate from 0.9% to 0.5% on both the headline and the core.

If headline annual CPI falls from 5.4% to below 5%, it could send the dollar spiraling down. The same could happen if Core CPI slips from 4.5% to under 4%. In case inflation statistics remain at current levels, it would strengthen the case for tapering by the Fed, triggering a rush to the greenback.

Thursday's Producer Price Index (PPI) and jobless claims are also of interest, but the last word of the week belongs to the University of Michigan's preliminary Consumer Sentiment Index for August. Last month's publication missed estimates and caused jitters in markets. Apart from the headline number, traders will eye the inflation expectations data, which shot higher last month and could edge lower this time.

Pound/dollar bulls are struggling to hold onto their lead. Momentum on the daily chart has flipped to the upside, but only just. The recent upswing has saved the currency pair from dipping below the 50-day Simple Moving Average (SMA), and it has recently been setting lower highs – a bearish sign. On the other hand, GBP/USD is trading above the 100 and 200-day SMAs.

After cable held up against the one-two punch from central banks – and also the super-strong NFP – it has room to rise. Weak US inflation could spark an upswing, while Britain's vaccination advantage may provide additional support.

The FXStreet Forecast Poll is showing that experts foresee a bullish trend for cable on all timeframes, despite a drop in average targets. While there is a wide variety of opinions, it seems that cable is set to never stray away from 1.39 in the forecast´s horizon. 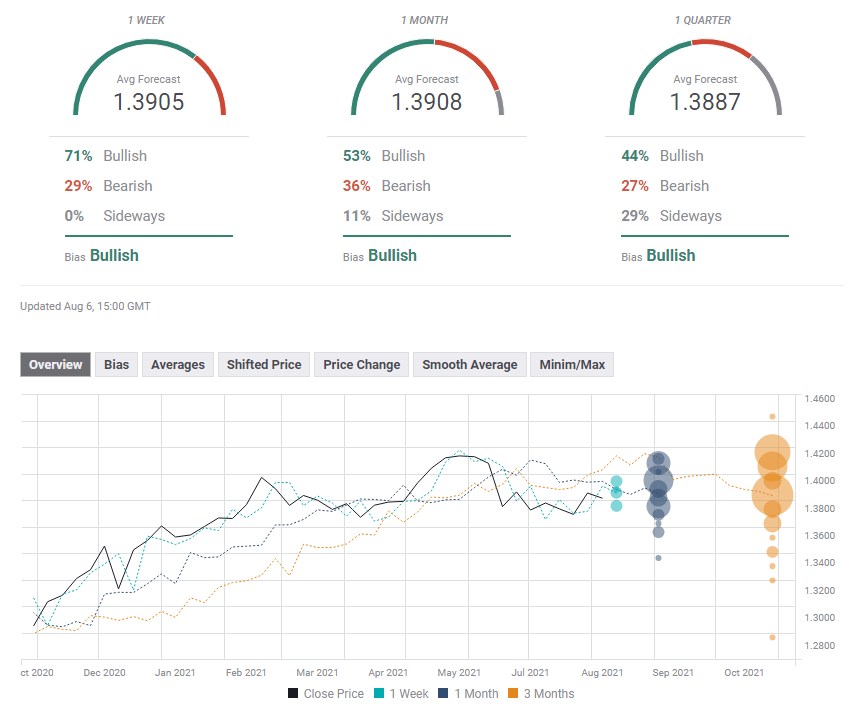