GBP/USD put an end to its three-week losing streak and staged a strong comeback from roughly four-decade lows of 1.1405. The US dollar correction and economic stimulus measures unveiled by the new UK PM Liz Truss saved the day for cable bulls. Will the rebound extend into a big week ahead?

Having lost over 200 pips in the week of September 29, GBP/USD lost further ground and hit the weakest level since 1985, just above 1.1400 in the first half of the week. The main underlying theme, earlier in the week, remained the relentless US dollar strength as investors scurried for safety in the face of the deepening European gas crisis-led global recession fears. Gazprom halted its key European gas pipeline indefinitely after G7 leaders agreed to implement a price cap on Russian oil. Dollar bulls shrugged off the mixed US labor market report for August, which downed the probability of a 75 bps Sept rate hike to around 55% vs. a 75% chance pre-NFP.

The improvement in the US ISM Services PMI and some of its components jacked up bets for an outsized Fed liftoff this month.  The US ISM Services PMI rose to 56.9 in August from 56.7, beating the market expectation of 55.5. The US dollar index jumped to a fresh 20-year high of 110.79, tracking the staggering rally in the Treasury yields across the curve. The benchmark 10-year rate refreshed three-month highs at 3.365%. Apart from dollar strength and risk-averse market conditions, GBP/USD also suffered from cautious and brutally honest commentary from BoE policymakers as they testified on the economic and inflation outlook before Parliament’s Treasury Committee.

The tide, however, turned against GBP bears in the latter part of the week, as markets remained expectant of a fresh economic package likely to be announced by Britain’s new PM Liz Truss, in her efforts to offer relief to the households from the energy crisis. On Thursday, PM Truss announced a “new energy price guarantee that will give people certainty on energy bills.” The cap will be in place from October 1. This helped rescue the pound from multi-decade troughs while the greenback embarked on a corrective downside, as risk flows returned to global markets. Further, investors resorted to profit-taking and position readjustments on their dollar longs ahead of Fed Chair Jerome Powell’s speech. Powell re-emphasized its hawkish stance, noting that the world’s most powerful central bank will continue its fight against inflation until it is brought down. The Fed President also warned against prematurely loosening policy. His comments cemented expectations of a 75 bps Fed rate hike at this month’s meeting, with the market wagering about an 85% chance. Although it failed to stem the dollar’s correction as the end-of-the-week flows played out heading into another big week. It’s worth noting that the Fed enters its blackout period ahead of its September 20-21 policy meeting.

On a surprising development, the Bank of England (BoE) announced on Friday that it postponed its interest rate decision by a week. “In light of the period of national mourning now being observed in the United Kingdom, the September 2022 meeting of the Monetary Policy Committee has been postponed for a period of one week,” the BoE said in a statement. GBP/USD erased a portion of its daily gains in the early American session but ended up registering strong daily gains.

It is an action-packed start to a new week, with a bunch of top-tier macroeconomic events from both sides of the Atlantic.

Amid a holiday in China on Monday, traders will brace for the UK monthly GDP and Industrial figures while the US lacks any high volatility data release. Tuesday is crucial for cable, as the US Consumer Price Index (CPI) will be released, which will overshadow the UK labor market report. The US headline annualized inflation eased to 8.5% in July, showing the first signs of peak inflation. This is the last crucial data point for the Fed ahead of its meeting and, therefore, will have a significant impact on the market’s pricing of the rate hike bets and the dollar valuations.

On Wednesday, the UK will report its monthly inflation, which could hit another multi-decade high after accelerating to 10.1% in July. Traders will also watch out for the US Producer Price Index (PPI) gauge. Britain’s inflation data will hold relevance ahead of the BOE monetary policy decision on September 22. The US Retail Sales, Weekly Jobless Claims and Industrial Production data will also garner some attention later that day.

On the last day of the week, cable traders will brace for Britain’s Retail Sales ahead of the US Preliminary UoM Consumer Sentiment and Inflation Expectations. The developments surrounding Truss’ energy relief measures, China’s economic activity and the Fed sentiment will also play a pivotal role in the GBP/USD price action. 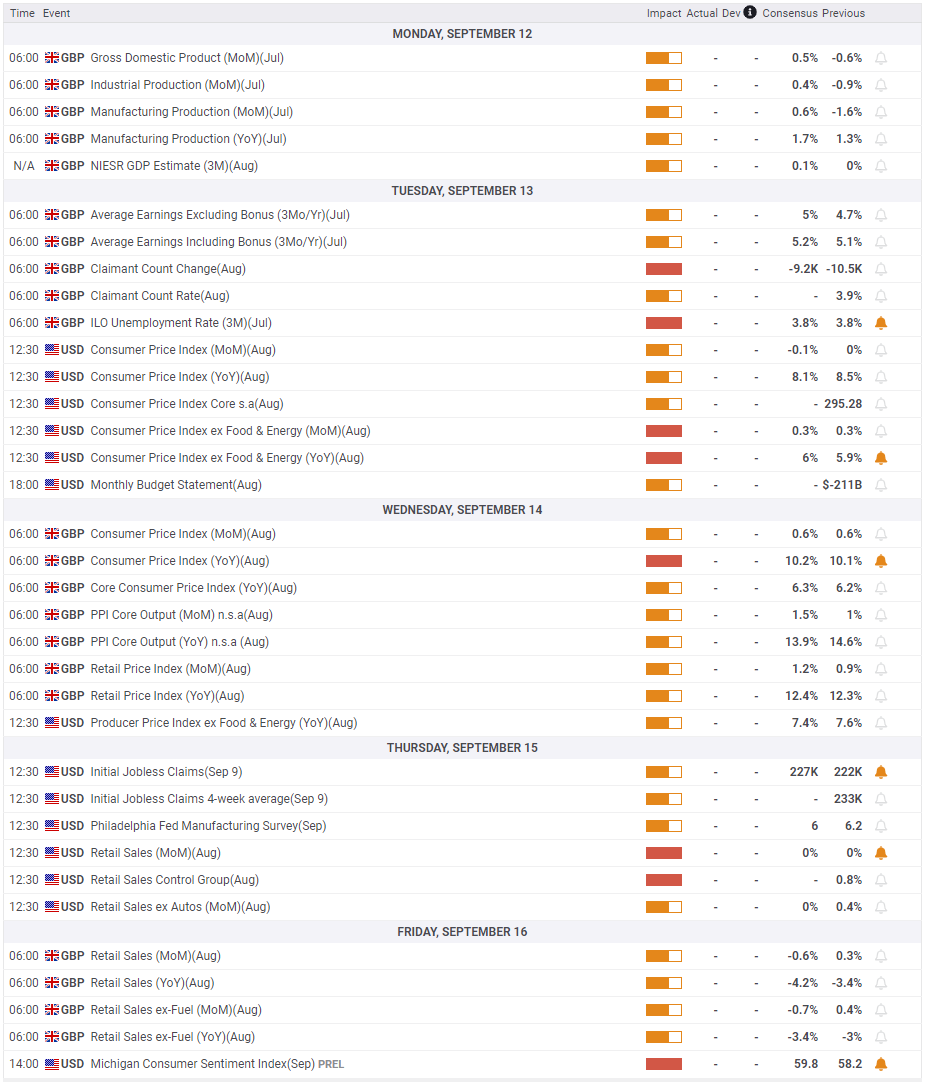 With Friday’s rebound, the Relative Strength Index (RSI) indicator on the daily chart climbed out of the oversold territory for the first time in September, suggesting that GBP/USD is staging a technical correction. On the upside, key resistance seems to have formed at 1.1670 (Fibonacci 23.6% retracement of the latest downtrend) ahead of the 1.1750/60 (21 DMA, Fibonacci 38.2% retracement) area. A daily close above that resistance area could attract additional buyers and open the door for an extended recovery toward 1.1860 (Fibonacci 50% retracement).

On the downside, 1.1500 (psychological level, end-point of the downtrend) aligns as significant support. Despite falling below that level several times this week, the pair managed to close those days above it. Hence, a daily close below 1.1500 could be seen as a bearish development and cause the pair to test 1.1400 once again. In case 1.1400 support fails, 1.1300 (psychological level) could be seen as the next bearish target.

FXStreet Forecast Poll paints a mixed picture for GBP/USD in the near term with the one-week average target sitting slightly below 1.1600. The one-month outlook shows a higher average target at 1.1700 but the bias is only slightly bullish. 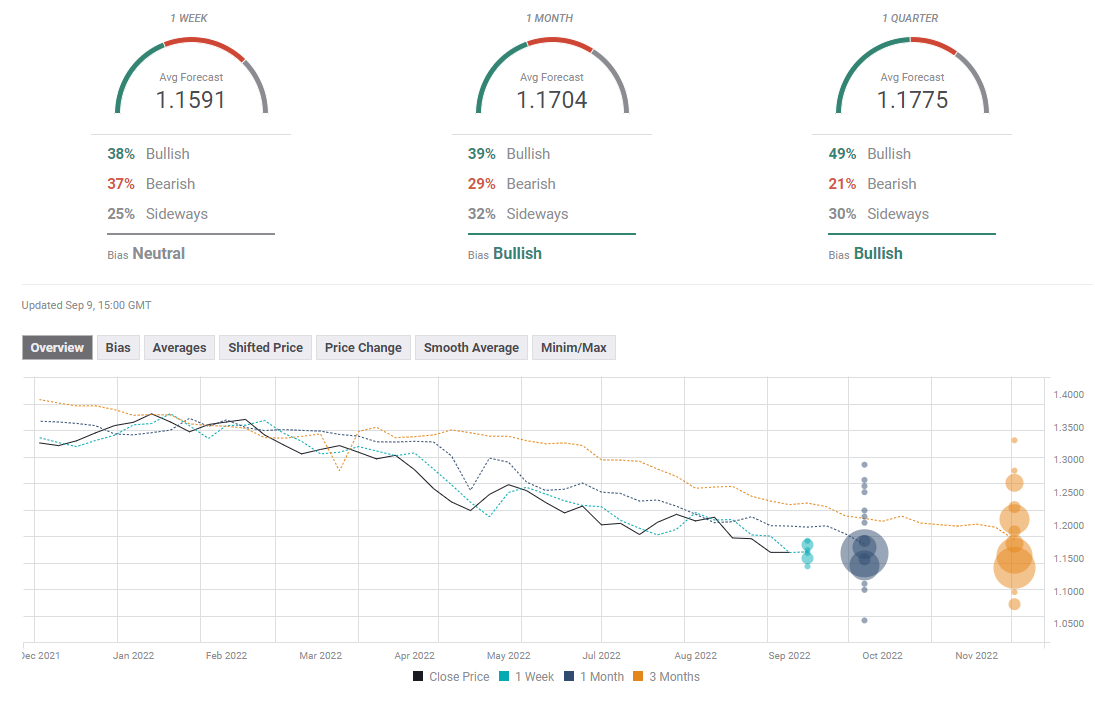 EUR/USD tumbles toward 1.0300 amid risk aversion

EUR/USD is falling hard toward 1.0300 after kicking off the week’s trading with a downside gap, as the risk-off mood underpins the US Dollar’s demand during Monday’s Asian session. The downbeat comments from ECB  policymaker Makhlouf exert bearish pressure on the Euro.

Gold price drops for the first time in five days while printing sizeable losses below $1,750 during early Monday. The yellow metal bears the burden of the market’s sour sentiment, amid intensifying Chinese covid woes, ahead of important data due later this week.