Inflation seems to bite – at least the US economy, which has suffered weaker growth. The dollar struggled in response to GDP data and the yield curve flattened, allowing GBP/USD to advance despite ongoing Brexit issues.

This week in GBP/USD: Dollar weakness as the main driver

Weak US growth: The world's largest economy expanded by only 2% annualized in the third quarter of the year, worse than estimated and a substantial climbdown from 6.7% in the previous period. The shortage in semiconductors had a considerable impact, and so did rising prices. The news weighed on the dollar.

Earnings impact: The greenback was also partially hit by good news from US corporates. Most companies "beat the street," pushing stocks to higher ground and the ensuing risk-on mood weighed on the safe-haven currency. Later in the week, however, earnings misses from Amazon and Apple somewhat dampened the mood and helped the dollar stabilize.

UK rate hike expectations: On the other side of the pond, Bank of England member Silvana Terneyro stuck to her dovish message on inflation and seemed to cool down expectations for a rate hike in the upcoming week.

Brexit: Relations between the UK and France remain tense amid an ongoing row over fishing. On the other hand, talks about the more critical issue of the Northern Irish protocol remained calm, and for the pound, "no news is good news" when it comes to lingering Brexit matters.

Will the Bank of England rush to raise rates? Probably not this time, but pressure is mounting. The "Old Lady," as the bank is also known, publishes new growth and inflation forecasts in its Monetary Policy Report, which is what makes this publication a "Super Thursday" event.

BOE Governor Andrew Bailey could use the opportunity to hint about future increases to borrowing costs, coming either in December or in the following MPR publication due in February. Higher inflation – a result of global issues and Brexit – alongside projected higher government spending may embolden the hawks.

On the other hand, Britain is still struggling with high numbers of COVID-19 cases, which add to the uncertainty. Moreover, the end of the furlough scheme may adversely impact the economy as well. Overall, the high level of uncertainty will likely hold the BOE from imminent action, but hints of rate hikes will likely dominate the event.

Apart from the decision, the MPR, and Bailey's press conference, investors will also be eyeing the voting pattern in the Monetary Policy Committee (MPR). Did any of the nine members – including the new chief economist Phil Huw – vote to raise rates now? Another topic is the bond-buying scheme, but it is already nearing its end, and the BOE said it could raise rates before stopping its purchases.

How will the pound react? Bond markets are pricing in a 62% chance of a rate hike, which seems elevated. That implies sterling could stumble if the BOE refrains from action, but expectations could still change toward "Super Thursday."

Fed Preview: Tapering is coming, the devil is in the details

The past two American jobs reports were bitter disappointments, significantly the meager increase of 194,000 jobs in September. Economists expect nearly double that pace in October, 385,000, with wages remaining at an annual rate of 4.6%. With the growing focus on inflation, Average Hourly Earnings could steal the show.

In September, Federal Reserve Chair Jerome Powell explicitly said that a November taper is on the cards and added that the process could end by mid-2022. The Fed's meeting minutes showed that the planned pace is $15 billion per month, thus making tapering an eight-month-long process.

Since then, inflation figures have been persistently high, eroding the narrative that it is only transitory – and even the Fed has admitted that price rises and supply-chain issues are more persistent than previously thought. However, employment and growth figures point to a slowdown.

There is little doubt that the Fed will announce tapering, but two open questions could determine the timing of the first post-pandemic rate hike. First, will the bank begin the process immediately? That would be dollar-bullish while announcing it in November but setting a start date of December would be bearish. Secondly, does the central bank stick to the $15 billion/month pace? That would be adverse for the greenback, while an accelerated rate of $20 billion would be positive.

There are several other things to watch. Powell could still say that inflation is transitory, as the recent calm in core CPI – at least in the past three months – shows. How much slack is there in the labor market? One of the great puzzles is the number of jobs open and the inability to fill them. If he says the US is closer to full employment due to retirement, it would be dollar positive. On the other hand, stressing that millions are out of work and that mismatches could last would be adverse for the greenback.

Other US Events: Nonfarm Payrolls and its full buildup

The past two American jobs report were bitter disappointments, significantly the meager increase of 194,000 jobs in September. Economists expect nearly double that pace in October, 385,000, with wages remaining at an annual rate of 4.6%. With the growing focus on inflation, Average Hourly Earnings could steal the show.

In general, better figures are dollar positive, and weak ones could send the greenback down. However, if the Fed sours the mood in markets, bad news for the economy could turn into good news for the greenback, as it would trigger safe-haven flows.

Ahead of the NFP, ISM's Purchasing Managers' Indexes have room to shape expectations, but their Prices Paid components could be in the spotlight instead of the Employment ones. The headlines in both gauges are set to hold above 60, thus reflecting strong growth.

Despite its weak correlation with the official jobs figure, ADP's private-sector jobs report is also set to rock markets – it showed an increase of 568,000 positions last month, far above estimates. 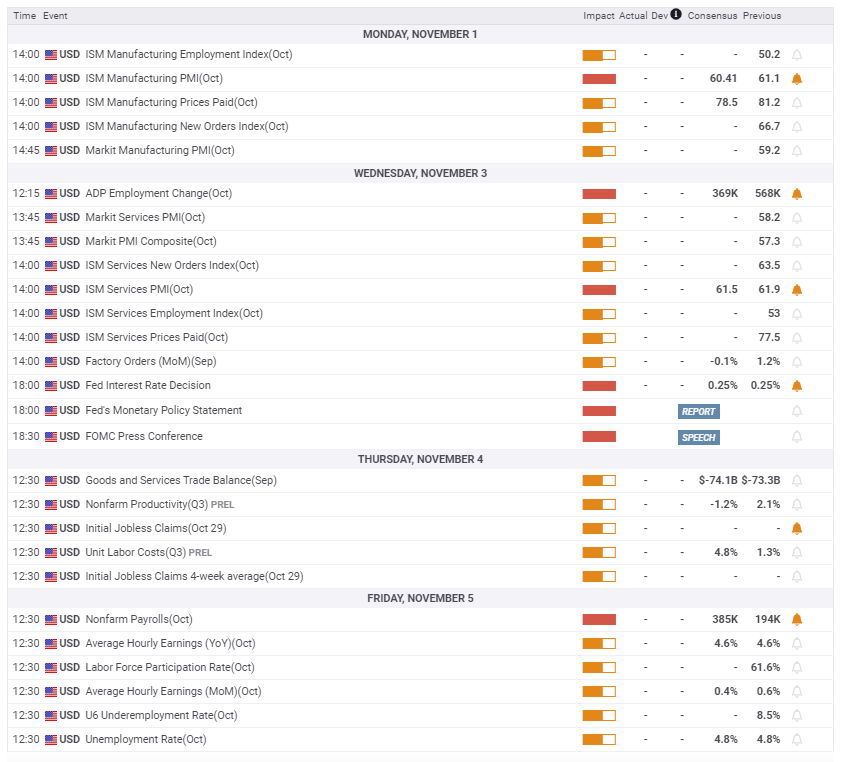 Pound/dollar has been trading in a narrowing triangle of sorts – one that is asymmetric, and its lower part – uptrend support – is broken. Failing to break above downtrend resistance would be a bearish sign.

Other indicators are mixed. The currency pair is battling the 100-day Simple Moving Average while trading below the 200-day SMA and above the 50-day one. Momentum is to the upside.

All in all, the picture is mixed.

While both central banks are set to refrain from going all guns blazing to fight inflation, the Federal Reserve's move – and a potential upbeat Nonfarm Payrolls report for a change – could outweigh the BOE's rate hike hints. There is more room to fall than to rise.

The FXStreet Forecast Poll is showing that experts foresee a short-term upward swing – dismissing the latest end-of-month flows. However, pressure on the pound is set to resume afterward with a potential loss of the 1.37 level. Average targets have been downgraded in the past week, albeit marginally. 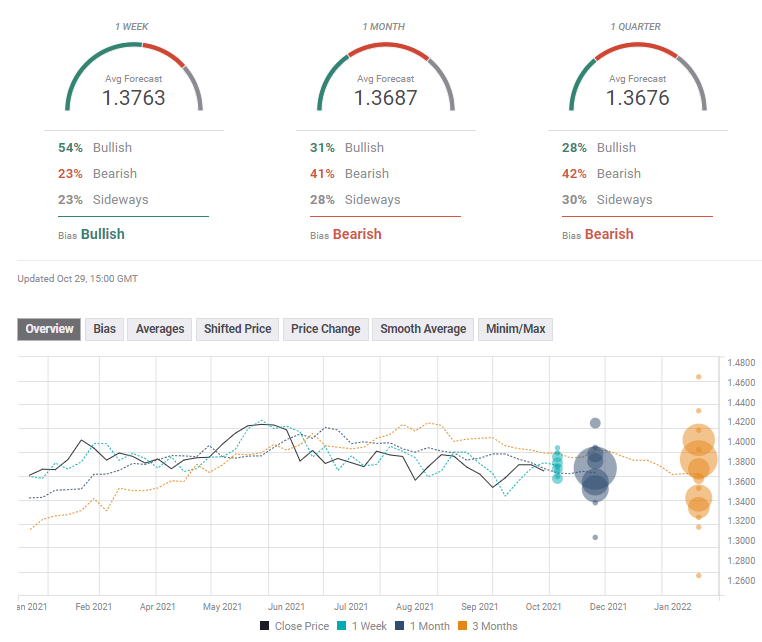