Three top-tier UK releases, three higher than estimated results. Alongside an improved market mood that somewhat weighed on the dollar, GBP/USD has been able to find a bottom. The focus is firmly on US data, but also Brexit and covid headlines are set to move cable.

This week in GBP/USD: Signs of economic strength

Furlough has faded into the past, yet the British labor market remains resilient. That has probably been the most essential release of the week, showing a drop in UK jobless claims in October despite the end of generous government aid. It was compounded by another reduction in the unemployment rate in September.

Other UK figures also exceeded estimates: inflation rose to 4.2% YoY in October, higher than the 3.9% forecast by economists. Despite reports of empty shelves, consumers were out and about, buying 0.8% more in October than in September, another statistic that surpassed projections.

These releases helped sterling recover and the lack of a major breakdown in Brexit talks also helped. While the UK still waves the stick of triggering Article 16 – a unilateral suspension of the Withdrawal Agreement – talks about the Northern Irish protocol continue.

On the other side of the pond, shoppers were also on a spree. US Retail Sales leaped by 1.7%, and the all-important Control Group by 1.6%. The data contrast gloomy consumer confidence measures and point to a rapidly growing economy.

The US data had a mixed impact on the dollar. The greenback swayed between rising expectations that the Federal Reserve would raise rates earlier, positive for the dollar, and diminishing demand as a safe-haven currency.

While many Fed speakers had public appearances, they all stuck to their previous statements – hawks were hawkish, and doves were dovish. Those in the middle remained mum.

COVID-19 cases remain elevated on both sides of the pond. Still, contrary to several European countries, British and American leaders are reluctant to announce new restrictions, leaving the topic mainly on the sidelines for markets.

As Christmas 2021 nears, some fear a repeat of what happened in 2020 – a government pledge not to cancel the holidays, followed by a sharp U-turn. Efforts to increase the administering of booster shots and the outreach to new populations seem to have made headway. As long as covid remains further away from the headlines, the pound could advance. New talks of restrictions could send sterling lower. 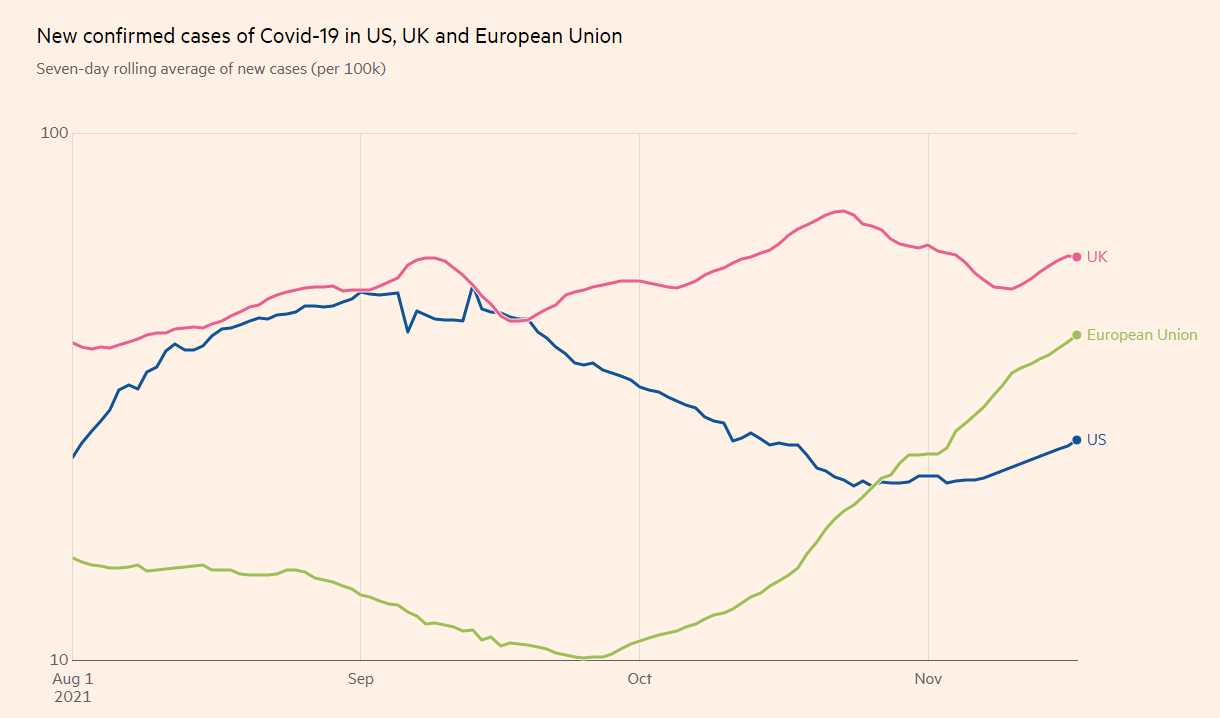 Brexit: the most recent statements from the EU's Maros Sefcovic and the UK's David Frost are positive, trying to reach a deal – primarily priced in by markets. In the unlikely case that Britain triggers Article 16, there is considerable room for the pound to fall.

The economic calendar is lighter, but there are several noteworthy events. Preliminary Purhcasing Managers' Indexes for November will likely remain high, pointing to ongoing expansion, despite supply chain issues. Any retreat from the highs could weigh on the pound.

US Events: Super Wednesday ahead of Black Friday

Thanksgiving has long become a holiday of thanking retailers and buying their goods. Consumption is already immense and could increase. Reports about expenditure will probably come only in the following week, but the holiday means a significant number of releases is due on Wednesday.

Durable Goods Orders for October will provide the first look into investment in the fourth quarter. The nondefense ex-air figure – aka "core of the core" is the most significant statistic. It advanced by a healthy 0.8% in September, and another rise is likely.

Economists expect the updated Gross Domestic Product (GDP) for the third quarter to show an upgrade from the meager 2% annualized initially reported. Core PCE – the Fed's preferred gauge of inflation – jobless claims, new home sales, and an update on consumer sentiment are all of interest.

Last but not least, the Fed's minutes from their decision earlier this month could rock markets. It could shed light on the taper decision and the bank's readiness to accelerate the process of reducing bond buys. Any hints about the timing of a rate hike are also critical.

Investors will also watch two political stories which cannot be untangled. First, Democrats are still struggling to pass their massive $1.85 trillion spending bill, but negotiations between centrists, leftists, and the White House could result in a compromise.

Secondly, President Joe Biden is set to announce his nominee to lead the Federal Reserve. Incumbent Chair Jerome Powell is leading, but Governor Lael Brainard is also high on the list. While both are doves, Powell is a Republican and considered soft on regulation by left-leaning Democrats. Brainard is a Democrat.

Biden may appoint Brainard to appease the left-wing of his party if he forces them to compromise on the spending bill. Conversely, he could reappoint Powell to get centrists on board with the multi-trillion piece of legislation.

While markets prefer the continuity of Powell, there is little difference between their views. Investors also assume some form of Biden's Build Back Better bill will pass. Any difference of $100 billion – while sounding like a massive amount of money – is only $10 billion per year in an economy of over $20 trillion. 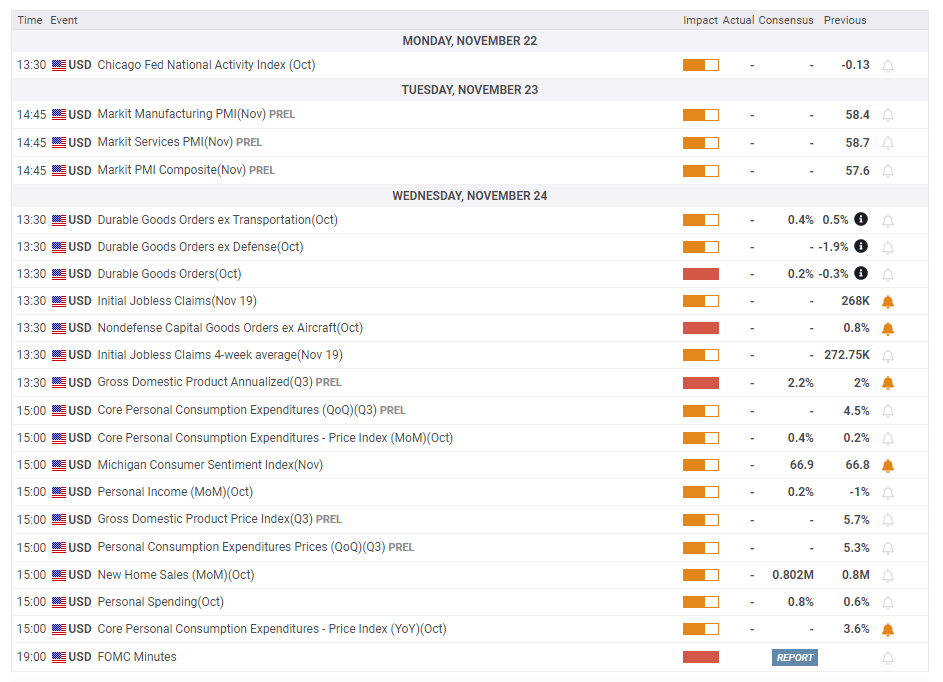 Pound/dollar remains in a downtrend, as lower lows and lower highs show. Moreover, momentum on the daily chart remains firmly to the downside, and the currency pair is trading well below the 50-day, 100-day and 200-day Simple Moving Averages (SMAs). Bears are in control.

The two arrows on the chart show where the 50-day SMA crossed the 100-day and the 200-day SMAs to the downside points that signaled GBP/USD was about to fall.

The FXStreet Forecast Poll is showing that experts are exporting another downward drift in the upcoming week, but a robust recovery later on. It is essential to note that target levels have been downgraded for all timeframes. 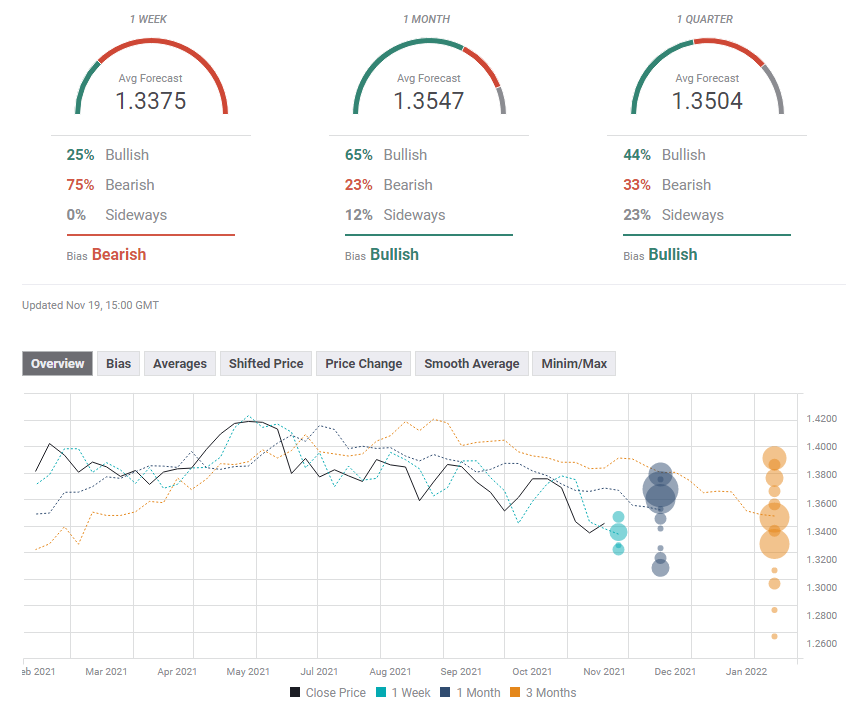