Omicron may be peaking in London – but the Federal Reserve's urge to tighten is still rising. These two forces will likely remain in play in the upcoming week, featuring all-important US inflation and retail sales data, GDP from the UK and a covid-watch.

This week in GBP/USD: Fed considers squeezing its balance sheet

Hawks come out of the woodwork: The Federal Reserve's meeting minutes from the December decision were decidedly hawkish. Members saw rate hikes coming sooner and at a faster pace – in addition to signaling a potential reduction of the balance sheet. The prospects of withdrawing money from markets sent stocks down and the dollar up.

Yields on 10-year bonds jumped above 1.70% amid expectations for a rate hike in March and no fewer than four increases to borrowing costs this year. That capped the upside for GBP/USD.

US data: The trend of robust data from the world's largest economy extended into 2022. ADP reported a whopping leap of 807,000 private-sector jobs in December, unemployment claims remained depressed in the last week of 2021, and ISM's Purchasing Managers' Indexes pointed to solid growth.

Nonfarm Payrolls figures were mixed. Once again, the headline disappointed by showing only 199,000 jobs gained, without substantial revisions. On the other hand, the unemployment rate tumbled to 3.9% and wage growth remains elevated at 4.7% YoY. After an initial drop, the dollar found its feet. A March rate hike remains on the cards.

Omicron optimism prevails: With every day that passes by, there is more evidence that the Omicron COVID-19 variant is less virulent than previous strains such as Delta. The variant is highly contagious, therefore still threatening to overwhelm the National Health Service (NHS), but markets are encouraged by the government's reluctance to impose new restrictions.

Moreover, cases in the Greater London area – where Omicron first landed – have begun falling, providing hope that the tsunami would wash away relatively quickly.

Politicians are reluctant to announce bad news over the holiday season. Still, such a move becomes more likely ahead of "Blue Monday" – the third Monday of January, which is arguably the most-depressing period of the year.

Growing pressure on hospitals could still force Prime Minister Boris Johnson into another U-turn. That would pound the pound. On the other hand, optimism from London and its surroundings is a ray of light that could help sterling shine. 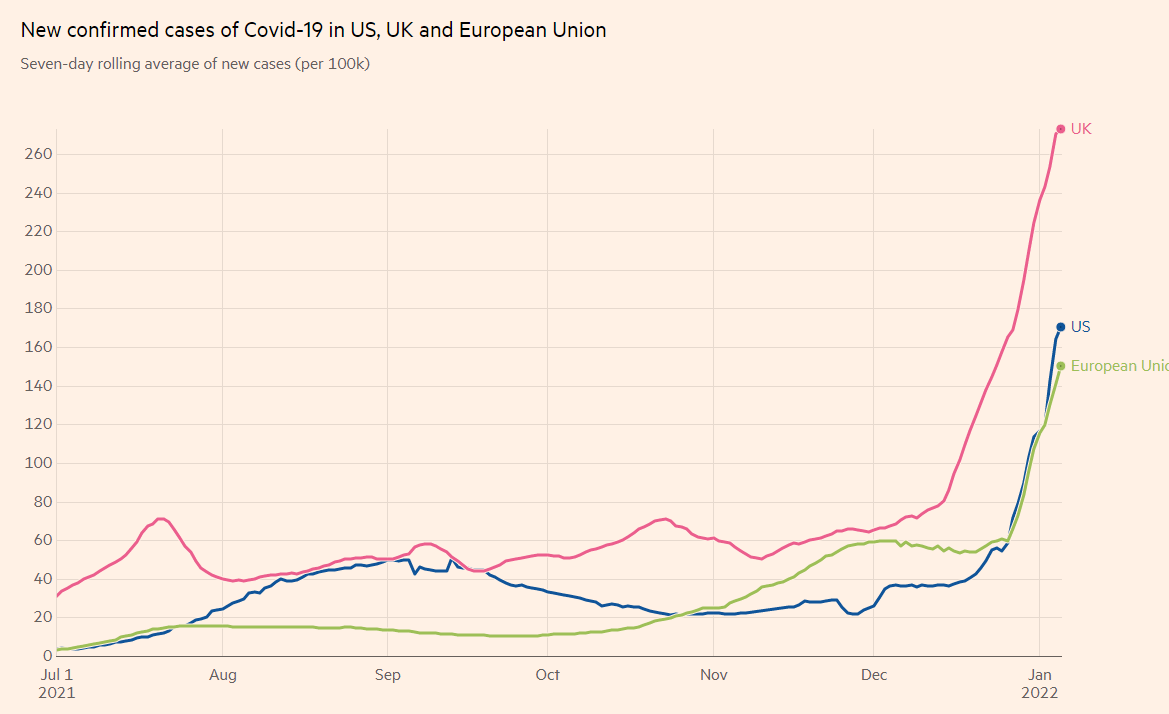 The British economic calendar remains relatively light, yet November's monthly Gross Domestic Product data is set to stir sterling. After posting a meager growth rate of 0.1% in October, output may have increased faster in the following month. Industrial production data is also of interest.

Brexit lurks in the shadows, and with Europeans fully back at their desks – some countries celebrated Epiphany on January 6 – tensions may rise again. Britain's Foreign Minister Liz Truss already met her Irish counterpart Simon Coveney, but there has been no movement on the open issues of the Northern Irish protocol. Any public disagreements about that topic or others could hurt the pound, while no news is good news for sterling.

US Events: All eyes on inflation data

Has inflation peaked in November? At least for the headline Consumer Price Index for December, that is the hope, due out on Wednesday. The drop in oil prices has likely cooled CPI from its multi-decade high of 6.8% YoY to a somewhat lower level in December.

If Core CPI remains elevated at around 5% YoY, however, investors will likely continue pricing in a rate hike by the Fed in March. Core prices heavily depend on supply chain issues, which have only marginally eased.

On Friday, the focus moves to the consumer. Retail Sales statistics for December are projected to show slight increases, in line with November's subdued data – and after substantial increases beforehand. The Control Group – aka "core of the core" – is critical for growth calculations and the Fed.

The last word of the week belongs to the University of Michigan's preliminary Consumer Sentiment Index for January, which will likely remain depressed. However, this gauge's correlation with consumption was weakening in 2021.

While Omicron rages in the US, there is little chance of government-imposed restrictions. The behavior of consumers may change, yet with every wave of the virus, the economic impact drops. On the political front, President Joe Biden continues trying to pass his Build Back Better bill. However, that is a long-term investment, and markets have tuned out of the political saga. 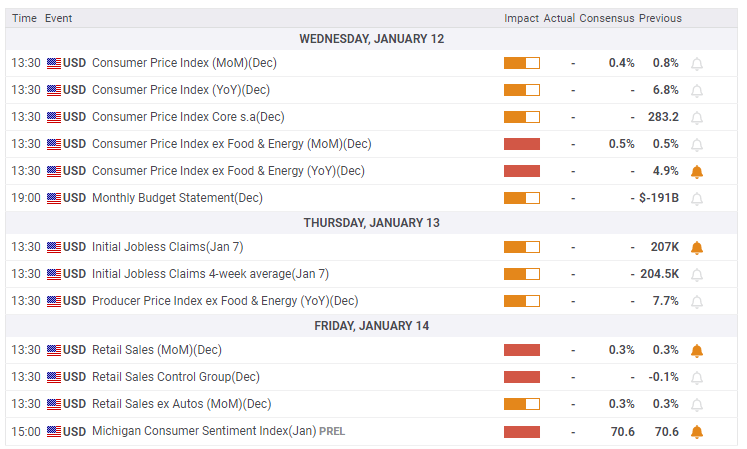 Pound/dollar has been trending higher since finding a bottom in the first half of December. Since then, momentum on the daily chart has turned positive, and the pair surpassed the 50-day Simple Moving Average. The fresh 2022 high of 1.36 serves as a higher high than the 1.3515 top recorded in November. Bears may find comfort in GBP/USD's recent failure to break above the 100-day SMA.

All in all, bulls are in the lead.

Fed hawkishness has yet to peak, and a strong Core CPI read from America could outweigh optimism about overcoming Omicron. All in all, there is room for a downside correction in GBP/USD.

The FXStreet Forecast Poll is pointing to gradual declines moving forward, an erosion of recent gains. 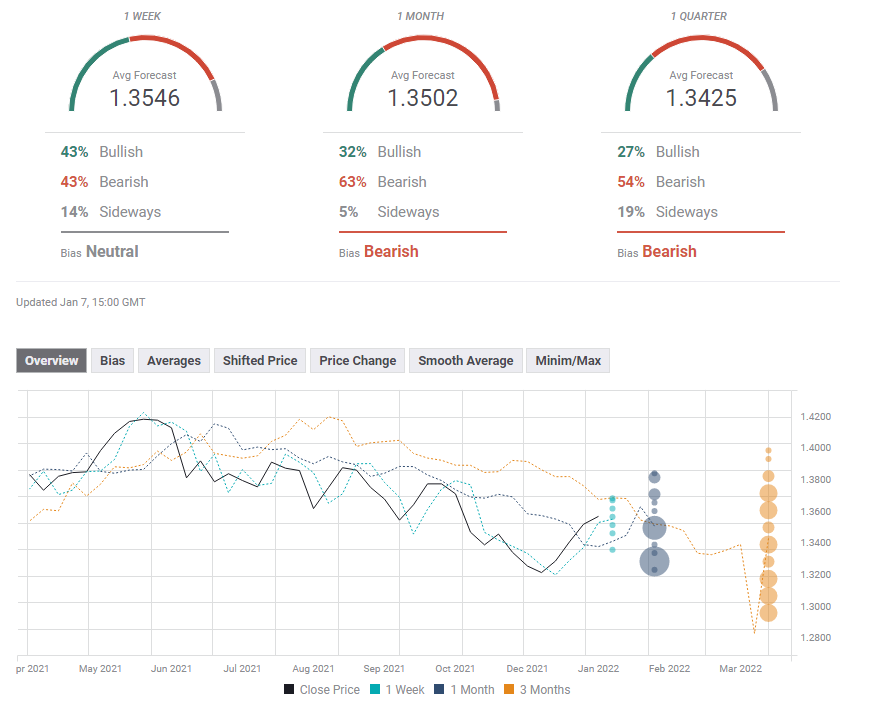