The first week of 2022 brought some surprises but little price action to the EUR/USD pair. The biggest shock came from the US Federal Reserve, as the central bank released the Minutes of its December meeting, which showed that policymakers began discussing the reduction of their bonds holding in the upcoming months.

US Fed balance sheet on the table

The central bank’s balance sheet currently includes roughly $8.3 trillion in Treasuries and mortgage-backed securities. “Almost all participants agreed that it would likely be appropriate to initiate balance sheet runoff at some point after the first increase in the target range for the federal funds rate,” the statement reads.

The Fed also judged that conditions for a rate hike could be met relatively soon if the recent pace of labor market improvements continued. And then came the December Nonfarm Payroll report. The US added 199K new jobs in December, half of what the market was expecting. The Unemployment Rate, on the other hand, improved by more than anticipated, contracting to 3.9%. The data failed to impress, but market participants considered the numbers still good enough for the Fed.

The Fed document’s immediate reaction was a run in government bond yields, as it’s clear that US policymakers are much more concerned about inflation than what they actually let know. Wall Street came under selling pressure as the dollar recovered the ground previously lost. The tepid NFP report also weighed on equities.

Across the pond, Eurozone inflation kept rising, up by 5% YoY in December, the highest on record, from 4.9% in the previous months. The German annual Consumer Price Index in the same month also rose by more than anticipated, reaching 5.3%. Skyrocketing inflation reopens speculation on whether the European Central Bank would need to abandon its conservative stance on monetary policy.

Retail Sales in the Union rose 1% MoM in November and 7.8% YoY – much better than anticipated. German Retail Sales were up 0.6% in the same month, but down 2.9% on a yearly basis.

Another down note came from Markit, as the final readings of the Euro area December PMIs showed a clear deceleration in businesses growth at the end of 2021, while the US official ISM PMIs for the same month contracted sharply when compared to their previous readings, but held within expansion levels.

The slowdown in economic progress began before the Omicron coronavirus variant took over, which hints at a tepid start of the year globally. The dominant covid strain spreads like wildfire, and while the number of deaths and hospitalization remains low, it’s still putting pressure on the economy, amid a substantial disruption in services.

The upcoming week will start with the EU publishing the January Sentix Investors Confidence and November Industrial Production.  The US will unveil the final reading of the December Consumer Price Index and December Retail Sales, seen up a modest 0.3%. Finally, the country will release the preliminary estimate of the January Michigan Consumer Sentiment Index.

The EUR/USD pair has been trading around the 1.1300 level since mid-November and remains nearby at the time being. It’s ending the week in the red, with technical readings in the weekly chart hinting at further declines ahead. Technical indicators have barely bounced from oversold readings, with the Momentum still advancing within negative levels yet the RSI heading back south. The pair is developing below all of its moving averages, with the 20 SMA crossing below the longer ones, a sign of general selling interest.

The pair is neutral on its daily chart, stuck around a directionless 20 SMA, while the longer moving averages keep heading south whilst well above the shorter ones. Technical indicators, in the meantime, had spent the week seesawing around their midlines without evident directional strength.

The bearish case will be clearer if the pair breaks below the December low at 1.1220, eyeing a slide towards the 1.1160 price zone. To the upside, resistance comes at 1.1340 and 1.1385, with sellers probably adding shorts on approaches to the latter. 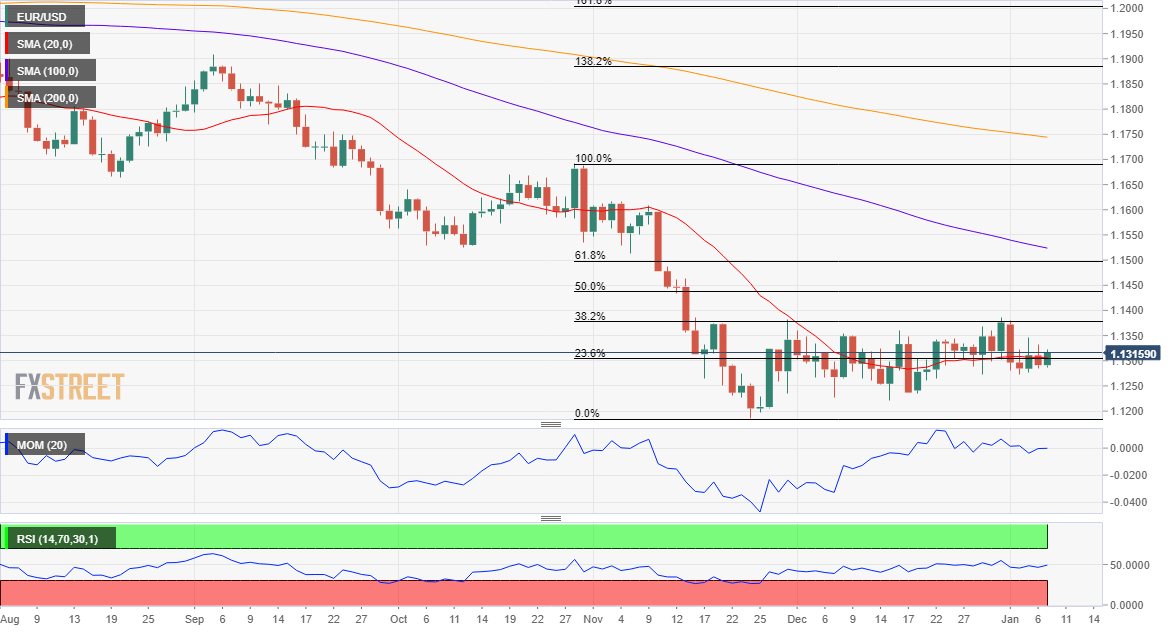 The FXStreet Forecast Poll hints at a bearish breakout, as bears are in control in the three time-frame under study.  On average, the pair is seen holding above 1.1200, but the Overview chart shows that most targets accumulate well below the current level, while the moving averages accelerated their sumps.

The 1.1000 level is a possible target in the monthly view, while chances of a decline towards the figure increase sharply in the three-month view. The number of bulls is below 30% of the polled experts in the three time-frame under study, reflecting speculation of a more aggressive monetary policy in the US.