Time to retire "transitory" – these hawkish words by Federal Reserve Chair Jerome Powell when referring to inflation have served as the tiebreaker in favor of the dollar. Fears of the Omicron covid variant have been intermixed with hope that it isn't as scary as initially thought. Apart from the virus, US inflation and UK GDP stand out.

This week in GBP/USD: Powell powers the dollar

Winter is coming – and rate hikes will follow in the spring. The Federal Reserve signaled it is ready to accelerate its tapering process. A faster reduction of bond-buys implies borrowing costs would move higher earlier than expected, perhaps in May. This hawkish tilt from Powell – also echoed by his colleagues – pushed the dollar higher.

More: NFP Quick Analysis: Weak report? Not when looking under the hood, and not for stocks

Ominous signs of a fast spread in South Africa resulted in discovering a new COVID-19 variant, soon to be named Omicron. After the initial market panic, the news around the strain was less stressful. Executives at Pfizer seemed relatively calm and assured that Omicron could be dealt with while rivals Moderna raised alarms.

At the time of writing, it is clear that Omicron is more contagious than previous variants, but uncertainty about lethality and vaccine resistance remains vague. Markets seemed to react to every piece of news: whether positive or negative.

While the way stocks traded in response to virus news was straightforward, the dollar's moves were messier. The greenback benefited from safe-haven flows against commodity currencies but struggled to make significant gains against majors due to falling yields. Overall, the greenback ended higher, but as mentioned earlier, this had more to do with the Fed than the virus.

Will Omicron obliterate Christmas? Probably not, as initial signs point to limited lethality and vaccine resistance. However, if the pressure on British hospitals grows – due to waning immunity and the ongoing spread of the Delta strain – the government could be forced to act. Any new restrictions could send sterling lower.

Britain's beefed-up campaign to administer booster shots to the broad public, however, could provide hope for containment of the disease within reasonable limits. Stability in the virus's parameters could prove positive for the pound. 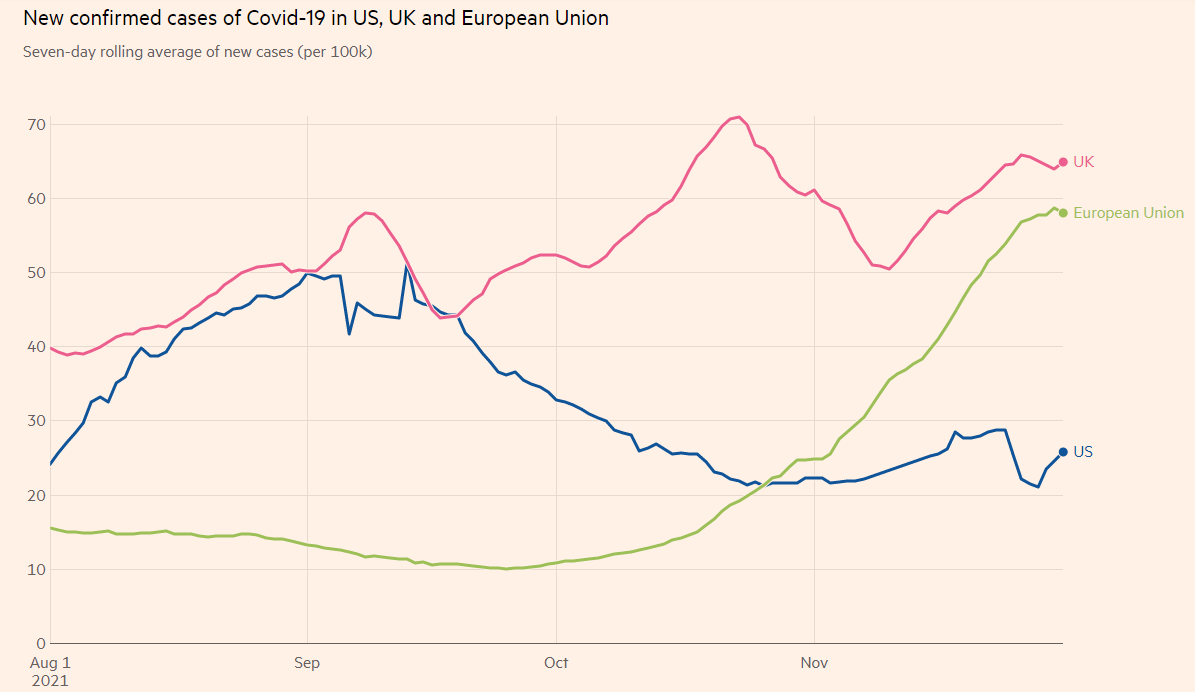 When it comes to Brexit, no news is good news – but the lack of a resolution to the row over the Northern Irish protocol means it could always come back to haunt the pound. Any incendiary comment from the chief British or European negotiators could hit the pound. Remarks related to Article 16 – a unilateral suspension of the Brexit deal – could have an outsized effect.

Gross Domestic Product figures for October stand out on the economic calendar. After jumping by 0.6% in September, the UK's growth rate likely softened in October. Supply-chain issues and a cooldown after the reopening are in play.

Another noteworthy event is a speech by the Bank of England's Ben Broadbent, the last such public appearance from a BOE member before the rate decision in the following week. Investors expect the "Old Lady" to raise rates from 0.10% to 0.25% on December 16, but uncertainty remains high. If Broadbent casts doubts on such a move, sterling could suffer.

US Events: Inflation and Omicron stand out

The Fed's "blackout period" has begun, but speculation remains rife about the bank's moves. Inflation figures for November could cement a decision to accelerate tapering and shape the size of such a change. The Fed currently reduces the number of monthly buys by $15 billion per month.

Will it speed the pace to $20 billion, or perhaps $25 billion? Consumer Price Index (CPI) data could help determine the outcome, which affects the timing of the rate hike.

The calendar points to moderation – a drop from 6.2% to 5.8% on the headline and from 4.6% to 4.3% in Core CPI. However, there is room for an upside surprise. The impact of falling oil prices will probably come only in December, and the same goes for the drop in shipping costs. Americans are buying online and offline, adding to price pressures.

Monday's release of Unit Labor Costs is also essential, as it serves as another gauge of wage inflation, which affects core prices. Another noteworthy publication is the University of Michigan's preliminary Consumer Sentiment Index for December. After tumbling to 67.4 points in November – a decade low, recovery is on the cards. However, the gauge has failed to project consumption in recent months, and therefore, carries less weight.

The upcoming week will likely see more Omicron cases in the US, but more importantly, assessments about the variant's vaccine resistance and lethality. The two-week period scientists said is needed to have a better picture of the strain is coming to an end, and some preliminary conclusions are due.

If current immunization schemes prove insufficient against Omicron, markets could suffer, and the dollar could rise. Conversely, evidence that vaccines retain a high efficacy rate even against this variant could push the greenback lower. Investors will likely look for how vaccines deal with severe illness and death, more than only infection.

Pound/dollar is on the back foot, setting lower lows and lower highs. The daily chart shows how it temporarily broke below a downtrend support line. While staying above that slippery slope is comforting for bulls, bears remain in control. Momentum is to the downside, and the pair trades below the 50-day, 100-day and 200-day Simple Moving Averages (SMAs). Moreover, the Relative Strength Index (RSI) is still above 30, thus outside oversold territory.

Even if inflation peaked in November, it could only serve to reinforce the need for tighter Fed policy, pushing the dollar higher.

The FXStreet Forecast Poll is pointing to a short-term drop but a recovery later on. Nevertheless, experts are becoming more bearish on cable, setting lower average targets for all time horizons. 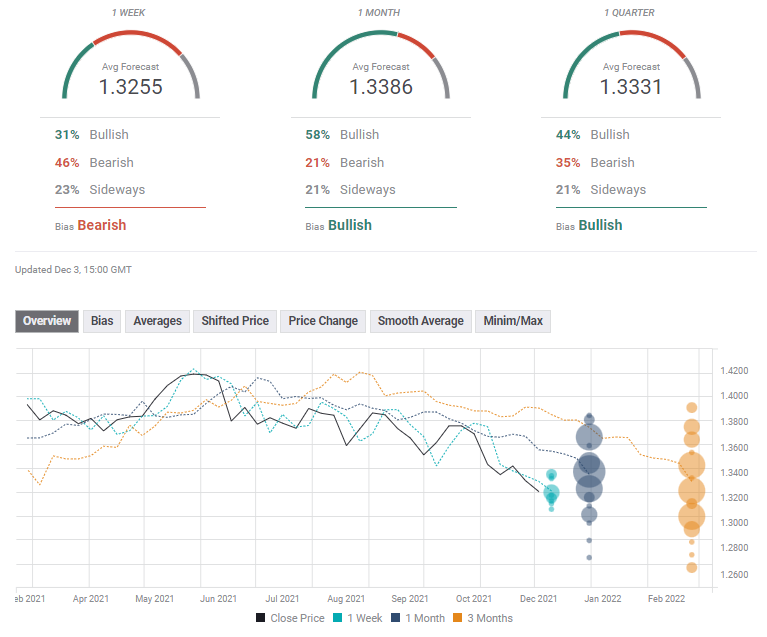 AUD/USD sees weakness to near 0.6400 ahead of Fed Powell’s speech

The AUD/USD pair is displaying a less-confident pullback after dropping to a fresh two-year low at 0.6414. The asset is not witnessing any signs of exhaustion in the downside bias and the pullback move will be crushed sooner by the market participants.

How many SHIB burned tokens will it take to spark a bull run?

Shiba Inu price has rebounded after losing 30% of market value in September. More uptrend is possible. Key levels have been identified to keep track of the developing trend.

European stocks are on the rise despite concern over gas imports into Europe. While the UK mini-budget does raise risks of higher-for-longer rates, traders are holding off until we see whether the BoE opt to move.