The EUR/USD pair hit a two-month high of 1.1919 this week but ends it in the red a handful of pips above the 1.1800 figure.  The pair touched the mentioned high on the back of weekend news, as the media called Joe Biden the US presidential election winner. It’s a long-accepted tradition, but it has no legal background.

US President Donald Trump has refused to concede his rival the victory and moved on with legal challenges. And while most have assumed Biden will be the next habitant of the White House, nothing is set and done. States have up to December 8 to resolve election disputes and provide official results.

Coronavirus vaccine news shocked markets on Monday, as US Pfizer pharmaceuticals alongside German biotech firm BioNTech announced their COVID-19 vaccine is more than 90% effective in preventing contagions. Wall Street soared to all-time highs, and the dollar rallied.  As the week developed, however, the sentiment turned sour.

The dismal mood came as the ongoing pandemic reached levels of contagions and deaths not seen since April in Europe, while the US reported record highs daily basis. News on vaccines progress released early in the week faded, as the speculative interest now believes that a steeper economic setback will come before there’s a chance to grow.

Lockdowns and curfews in Europe have become the new normal, and what seems more worrisome, the US is following the same path amid a stressed health system. So far, the US has implemented punctual curfews as the decision is in the head of governors. The US has an economic advantage over the Union, as the American economy keeps running while tough restrictions hit Europe. Could this change in the near-term? It could if Joe Biden actually becomes the next US President on January 20.

Data wise, it was quite a light week, although macroeconomic numbers reflected the downbeat mood. The German ZEW Survey on Economic Sentiment plunged in November to 32.8 from 63.7 for the EU. Industrial Production in the Union fell by more than anticipated in September, while the Gross Domestic Product in the Old Continent was downwardly revised from 12.7% to 12.6% in Q3.

In the US, figures were a bit better, as Initial Jobless Claims continued to shrink early November, down to 709K in the first week of the month. Inflation, however, was confirmed at 1.6% YoY in the country, slightly worse than anticipated. Finally, the preliminary estimate of the Michigan Consumer Sentiment Index came in at 77, much worse than anticipated, exacerbating the dismal mood.

Next Tuesday, the US will publish October Retail Sales, foreseen up a modest 0.5%. Otherwise, the macroeconomic calendar will include little of interest. The focus will remain on US political developments and coronavirus-related headlines.

The EUR/USD pair has set a higher high for the week and a higher low, which somehow limits the chances of a steeper decline. In the weekly chart, the pair is holding above a bullish 20 SMA, which advances beyond the larger ones. The Momentum indicator lacks directional strength around its midline, with a modest bearish slope, while the RSI also turned marginally lower but around 57. Technical indicators are reflecting the absence of demand instead of suggesting an upcoming slide.

The daily chart offers a neutral stance, as the pair is barely holding above a flat 20 DMA, while the larger ones maintain modest bullish slopes below it. Technical indicators seesaw around their midlines, reflecting the ongoing range-trading. 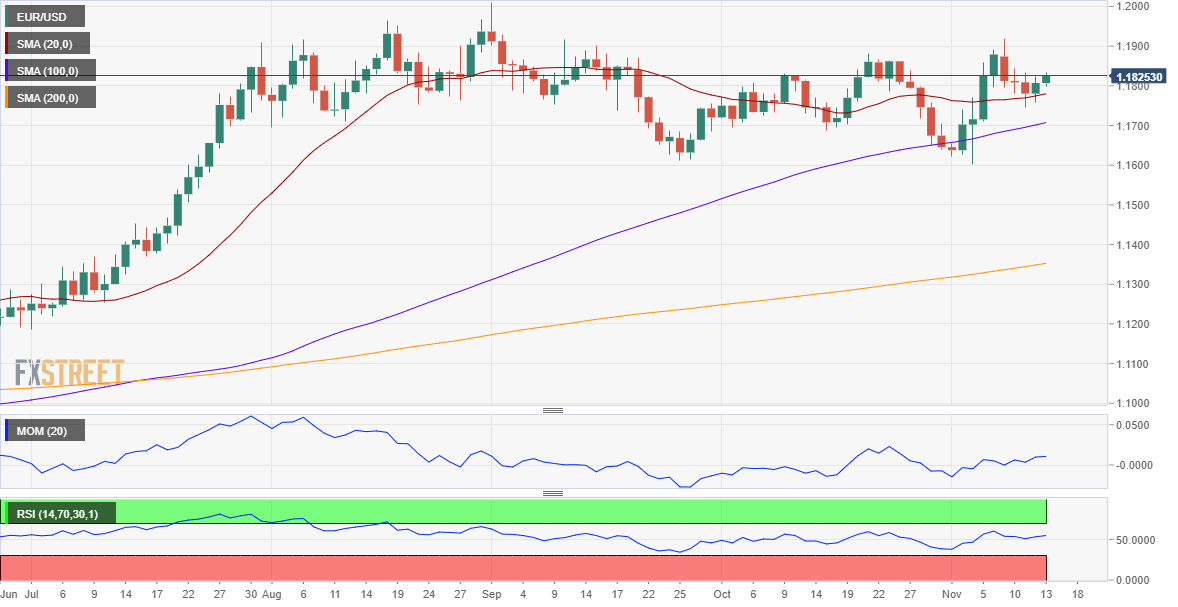 Bulls outpace bears according to the FXStreet Forecast Poll leading the way in the three time-frame under study. However, the pair is seen holding below 1.2000, on average. The bullish sentiment is stronger in the one-month perspective, while bearish interest diminishes as time goes by.

The Overview chart shows that moving averages remain directionless, although most targets accumulate above the current level, with more experts now forecasting gains beyond the ECB’s line in the sand at 1.20.