Starting from the second half of 2016, the Chinese authorities set out to tackle the indebtedness issue of its corporate sector and inaugurate a campaign of "deleveraging" as the debt of China's corporate sector rose to an unprecedentedly high level (166.4% of GDP as of end-2016) which exposed a material threat to the country's debt sustainability and financial stability. (Figure 1) 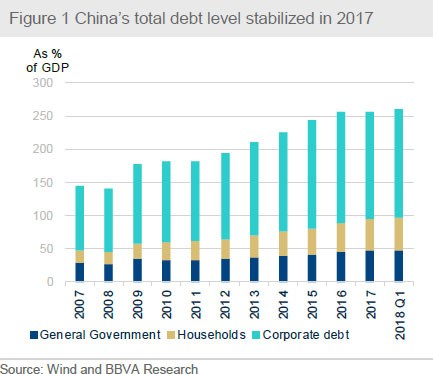 The authorities' efforts to deleverage China's corporate sector bore some early fruits. As of end-2017, China's corporate debt increased by 160.3% of GDP, the slowest pace since 2011. As reported by the National Statistics Bureau (Figure 2), the leverage ratio of Chinese non-financial firms, which is defined as the ratio of their total liabilities to total assets, declined further in 2017. However, such a decline appeared to be uneven as private firms' leverage ratio even rose in 2017 in contrast to the trend of that among SOEs. 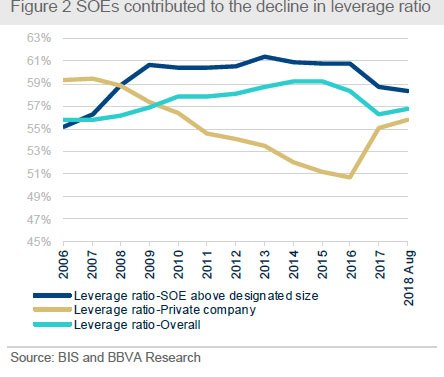 The deleveraging measures implemented by China's authorities also have the side effect. The monetary tightening and clamp-down of shadow banking activities cut firms, in particular private and small ones, off credit supply which they used to live on; the strengthened control of SOEs and LGFV debt dampened economic activities and investment; the clean-up of zombie companies and overcapacity in certain industries led to more unemployment in the society. Worse is the unexpected escalation of US-China trade tensions in early 2018, which severely dampened the confidence of both investors and consumers.