The AUD/USD pair has advanced steadily ever since the week started, topping at 0.7439 and finishing it at around 0.7420. It all reduced to easing demand for the American dollar after it attracted investors in the previous week.

Market participants are beyond US Federal Reserve tapering, and high-yielding assets are in a firm demand. Still, the Australian currency was not only backed by equities but also by commodities. Gold flirted with $1,800 a troy ounce, while crude oil prices stand at multi-year highs as the OPEC+ refuses to free output and is increasing it at baby steps.

Hawkish means hawkish for a change

It was kind of a surprise that US Federal Reserve officials pledged for reducing their massive financial support programs, despite the tepid Nonfarm Payrolls report. It is also clear that the market has already priced it in, as US equities finished the week with gains. The Fed meeting Minutes provided additional hints on the matter, with action expected to be announced in the upcoming November meeting to finally retrieve the pandemic-related support by mid-2022. Worth noting that Powell has repeated ad exhaustion that reducing financial facilities does not equal a following rate hike.

The Australian dollar rallied despite tepid local data. NAB’s Business Conditions unexpectedly plunged to 5 in September, although NAB’s Business Confidence improved from -6 to 14. October Westpac Consumer Confidence printed at -1.5% in October, well below the previous 2%. Finally, Consumer inflation expectations in the same month were down to 3.6% from 4.4%, while the country lost 138,000 job positions in September. The dismal numbers are directly linked to the ongoing covid-related restrictions, although the government and policymakers are confident the situation will soon be reverted and that the economy will bounce back before year-end.

Data coming from the US was encouraging and hinting at a solid economic recovery. The Consumer Price index printed at 5.4% YoY in September, slightly above the preliminary estimate. In addition, Initial Jobless Claims for the week ended October 8 shrank to 293K, while inflation at producer levels remained elevated, at 8.6% YoY. Finally, September Retail Sales surprised by raising 0.7% MoM, much better than anticipated, while the preliminary estimate of the October Michigan Consumer Sentiment Index unexpectedly shrank to 71.4 from 72.8, also missing the market’s expectations.

Asia has quite a busy week ahead, as early on Monday, China will publish September Retail Sales, Industrial Production, and the Q3 Gross Domestic Product, foreseen at 0.5%, well below the previous 1.3%. The Reserve Bank of Australia will publish the Minutes of its latest meeting on Tuesday, while later into the week, the country will publish the September Westpac Leading Index and Q3 NAB’s Business Confidence. On Friday, the country will unveil the preliminary estimates of the October Commonwealth PMIs.

The US will publish September Industrial Production, housing-related data and the usual weekly unemployment claims. On Friday, Markit will publish the preliminary estimates of its October PMIs for the world’s largest economy.

The AUD/USD pair seems poised to extend its advance according to the weekly chart, as it has extended its bounce from a flat 100 SMA to close the week a handful of pips above a firmly bearish 20 SMA. Meanwhile, technical indicators keep advancing and are about to cross their midlines into positive territory.

According to the daily chart, the pair may be approaching a corrective decline. AUD/USD is currently trading just above a mildly bearish 100 SMA, while technical indicators are losing bullish momentum near overbought readings.

The pair faces strong resistance at 0.7477, September monthly high, with a break above it, favouring an extension toward the 0.7600 price zone. Selling interest will likely defend the latter. On the other hand, the pair may turn bearish on a slide below 0.7330 en route to the 0.7200 price zone. 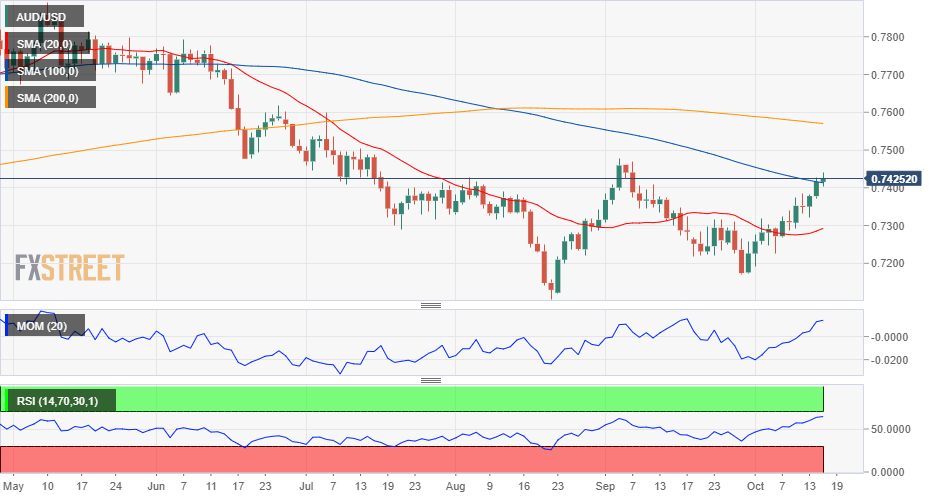 The FXStreet Forecast Poll shows that bulls lack long term conviction. The pair is expected to advance only in the near term, with bears dominating the monthly and quarterly perspectives. Bulls account for 63% of the polled experts in the weekly perspective, down to 27% in the monthly view, when bears jump to 65%.

The Overview chart shows that most targets accumulate above the current level in the near term, while in the monthly and quarterly views the most experts are seeing the pair between 0.7000 and 0.7400.

EUR/USD Weekly Forecast: Dollar’s corrective decline soon to be over