Despite this, the greenback has far from found a top. The dollar strengthened on expectations the US Federal Reserve will start tapering its massive bond-buying program as soon as next November, amid persistent inflationary pressures. Higher US Treasury yields boost such concerns, with the American currency seesawing alongside them. Elevated yields support a stronger dollar.

Tapering is not a rate hike

Fed officials seem to be unfazed by the dismal Nonfarm Payrolls report published earlier this month. Overall, Fed representatives continued to hint at soon-to-come tapering. The Minutes of the latest meeting, released last Wednesday, showed that there are good chances they would start reducing asset purchases in mid-November to ultimately end in mid-2022. While trimming facilities seems a done deal, a rate hike is a different issue. Powell & Co. have made it clear that cutting off financial support does not automatically mean a rate hike afterwards.

Tepid European data and comments from European Central Bank policymakers continued to undermine demand for the EUR. The ECB is far from reducing its facility programs and maintains an accommodative stance. It is probably the most conservative central bank these days, with macroeconomic figures backing the dovish view.

Germany published the October ZEW survey on Economic Sentiment, which contracted sharply in the whole EU. German inflation was confirmed at 4.1% YoY, while the EU August trade Balance posted a modest seasonally adjusted surplus of €11.1 billion.

Upbeat US data is just the beginning

On the opposite side of the ring, US data was upbeat. The Consumer Price index printed at 5.4% YoY in September, slightly above the preliminary estimate. In addition, Initial Jobless Claims for the week ended October 8 shrank to 293K, while inflation at producer levels remained elevated, at 8.6% YoY. Finally, September Retail Sales surprised by rising 0.7% MoM, much better than anticipated, while the preliminary estimate of the October Michigan Consumer Sentiment Index unexpectedly shrank to 71.4 from 72.8, also missing the market’s expectations.

The upcoming week will be light in terms of macroeconomic releases. The most relevant figures will be out next Friday when  Markit will publish the preliminary estimates of its October PMIs for the EU and the US. Ahead of the event, the US will publish September Industrial Production, housing-related data and the usual weekly unemployment claims, while the EU will release the final reading of its September inflation figures.

From a technical point of view, the EUR/USD pair has little chance of recovering further. The weekly chart shows that the pair remains confined to a tight range around its 100 and 200 SMAs, while the 20 SMA maintains its firmly bearish slope well above the current level. Meanwhile, technical indicators consolidate within negative levels, reflecting absent buying interest.

The daily chart suggests that the latest recovery has been corrective, as sellers persistently surge around a bearish 20 SMA, while the longer averages keep heading south far above it. Technical indicators have recovered from their recent lows, although the RSI has already turned flat at around 41, another sign of bears’ dominance. 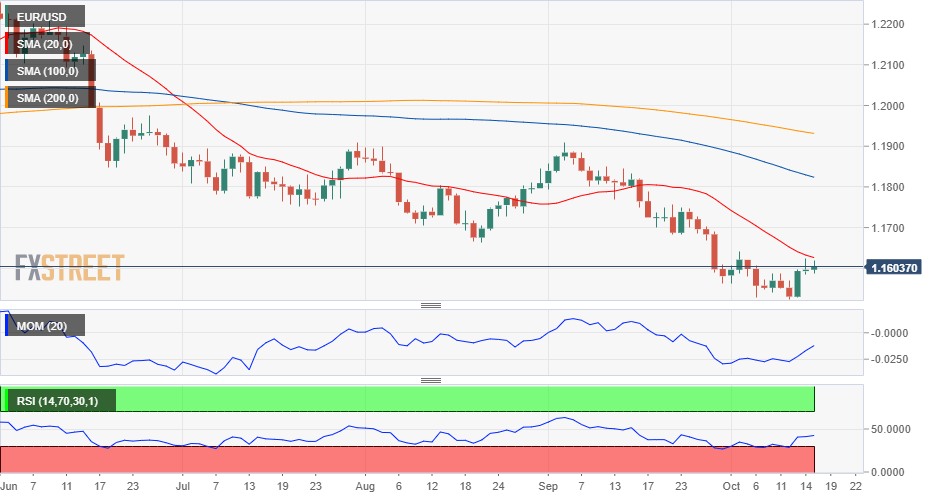 The Overview chart supports a long term bearish trend. The weekly moving average is slightly bullish, with most possible targets accumulating just below the 1.1700 threshold. The moving average is flat in the monthly view, while firmly bearish in the quarterly perspective, as most likely targets stand between 1.1300 and 1.1600.