Gold started the week in a calm fashion and spent the first two trading days fluctuating in a tight range above $1,750. With the US Treasury bond yields falling sharply, however, XAU/USD gathered bullish momentum and gained nearly 2% on Wednesday before extending its rally to a fresh monthly high above $1,800 on Thursday. Ahead of the weekend, gold reversed its direction, once again, on rising US T-bond yields and erased the majority of its weekly gains to settle around $1,770.

The market action was subdued on Monday as the US bond markets were closed due to the Columbus Day holiday. When American investors returned on Tuesday, the benchmark 10-year US T-bond yield lost more than 3% and helped gold inch higher. On the other hand, the poor performance of US stocks allowed the greenback to outperform its rivals and limited XAU/USD’s upside.

On Wednesday, US T-bond yields continued to push lower and the dollar came under heavy bearish pressure during the American trading hours. The data published by the US Bureau of Labor Statistics revealed that the Core Consumer Price Index (CPI) stayed unchanged on a yearly basis at 4% in September and this reading provided a boost to risk sentiment. Additionally, upbeat third-quarter earnings from big US financial institutions made it difficult for the safe-haven greenback to find demand.

Moreover, gold attracted additional technical buyers after piercing through the upper limit of its near-term trading channel at $1,770.

The data from the US showed on Thursday that the annual Producer Price Index (PPI) rose to 8.6% in September from 8.3% in August. Furthermore, the US Department of Labor announced that there were 293,000 initial claims for unemployment benefits in the US during the week ending October 9. Reflecting the risk-positive market environment, the S&P 500 Index gained 1.7% on Thursday and gold reached $1,800 for the first time since mid-September.

On Friday, the decisive rebound witnessed in the 10-year US T-bond yield on robust US data forced gold to turn south. The US Census Bureau reported that Retail Sales rose by 0.7% on a monthly basis to $625.4 billion in September, beating analysts’ estimate for a decrease of 0.2% by a wide margin. On a negative note, the University of Michigan’s Consumer Sentiment Index edged lower to 71.4 in October's flash estimate from 72.8 in September but this report received little to no reaction from market participants.

Third-quarter Gross Domestic Product (GDP) data from China will be looked upon for fresh impetus at the beginning of the week. Investors expect the Chinese economy to grow by 5.2% on a yearly basis after expanding by 7.9% in the second quarter. September Retail Sales and Industrial Production data will be featured in the Chinese economic docket as well. In case these prints point to a considerable slowdown in the world’s second-biggest economy, safe-haven flows could dominate the markets and help the dollar keep a firm footing and vice versa.

On Wednesday, Consumer Price Index (CPI) data from the UK and the euro area will highlight the economic calendar. Nevertheless, these figures are unlikely to have a direct impact on XAU/USD.

Federal Reserve Bank of Philadelphia’s October Manufacturing Survey and the weekly Initial Jobless Claims data from the US will be watched closely before the IHS Markit published the flash Manufacturing and Services PMI reports for the UK, Germany, the euro area and the US.

In the meantime, investors will pay attention to the US Treasury bond yields. The benchmark 10-year US T-bond yield has managed to hold above the key 1.5% level despite the weekly decline and gold could come under bearish pressure in case the greenback capitalizes on rising yields. 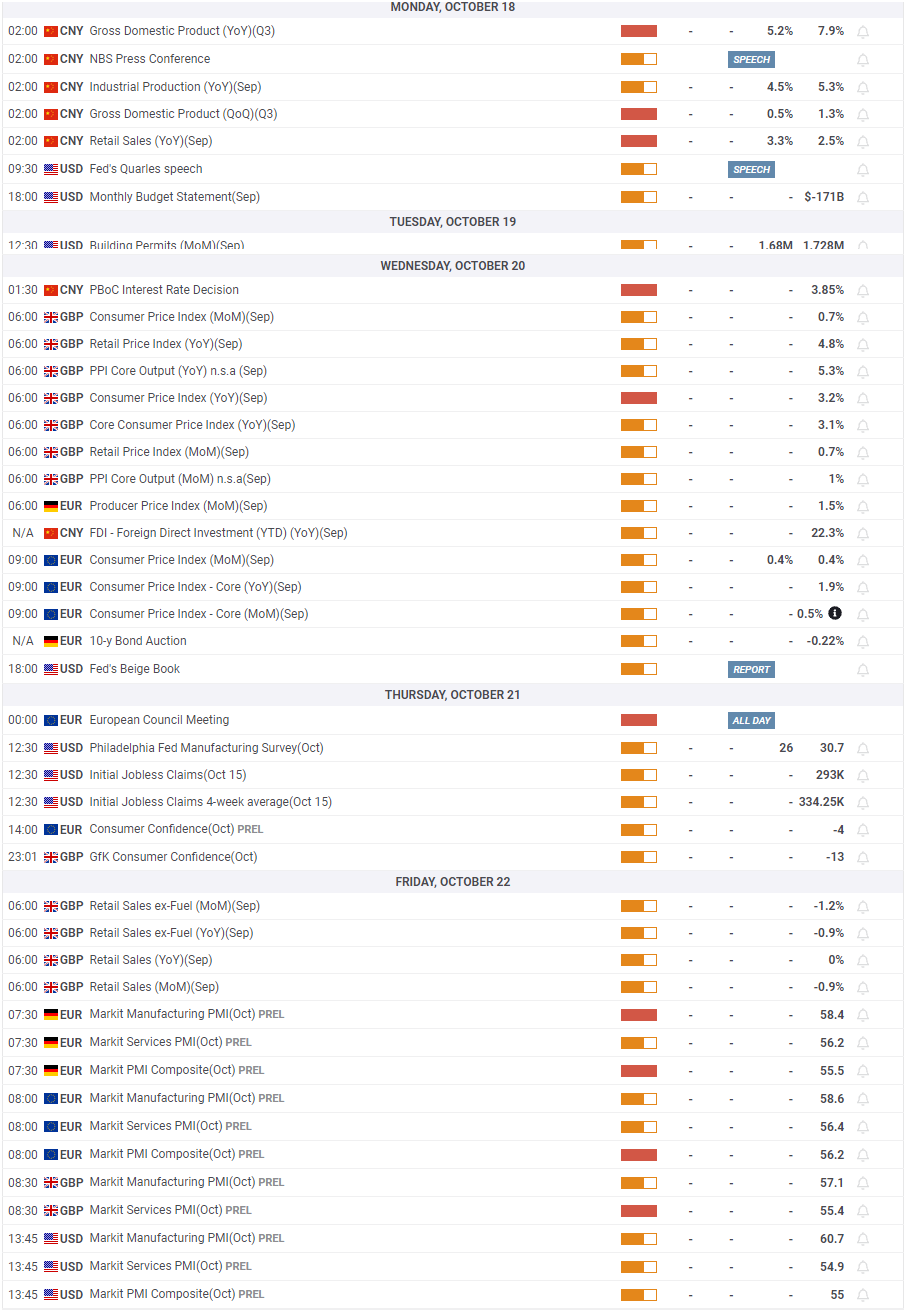 The Relative Strength Index (RSI) indicator on the daily chart returned to the 50 area on Friday, suggesting that buyers are struggling to remain in control of gold's action.

The initial support is located at $1,770 (former resistance, Fibonacci 61.8% retracement of the April-June uptrend). A daily close below that level could open the door for additional losses toward the 20-day SMA at $1,760 and $1,750 (lower limit of the previous trading channel).

On the upside, the 50-day SMA seems to have formed dynamic resistance at $1,780 before $1,800 (Fibonacci 50% retracement, 100-day SMA, 200-day SMA). In case buyers manage to lift the price above the latter, the recovery could extend toward $1,825 (Fibonacci 38.2% retracement). However, sellers are likely to defend this resistance unless gold is fueled by a fundamental driver.

The FXStreet Forecast poll shows that experts expect gold to edge slightly higher in the near term with the average target on the one-week view pointing to $1,781. The one-month outlook paints a mixed picture and the one-quarter outlook doesn't highlight a decisive move in either direction. 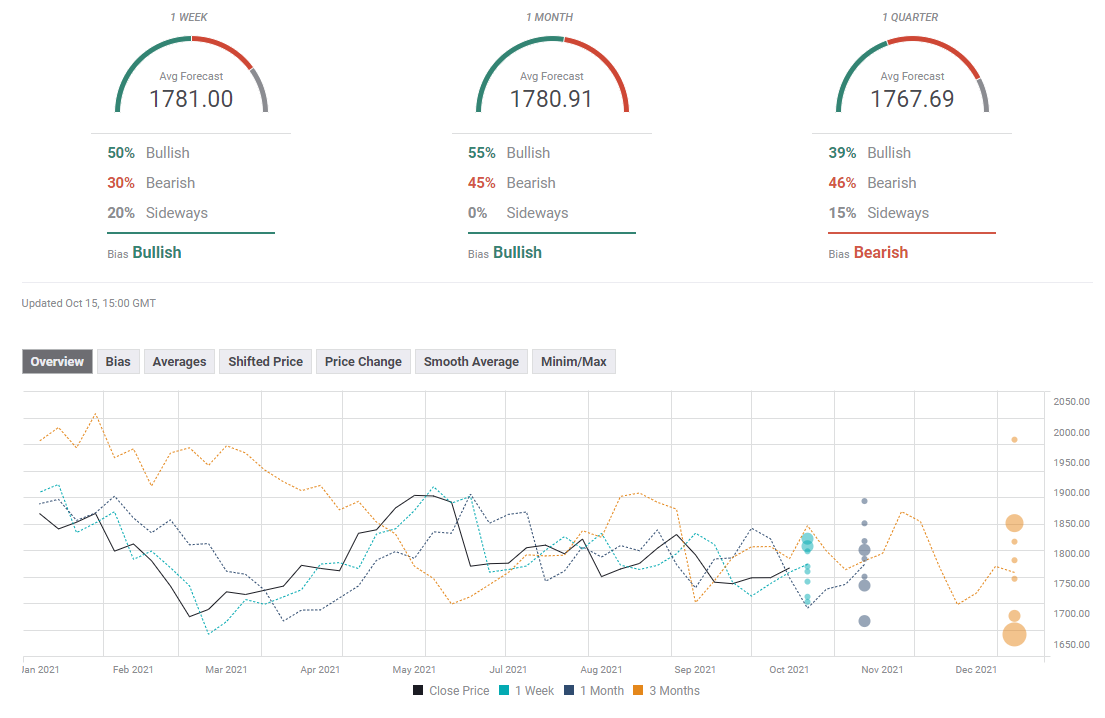