The Mexican peso dropped earlier today to the lowest level in two months amid emerging market jitters. As the negative tone eased, it started to recover ground and erased daily losses. Despite the recovery, emerging market currencies, including MXN remain under pressure.

The USD/MXN pair jumped to 19.67 earlier today reaching the strongest level since July 3. Then pulled back significantly and even dropped below the 19.50 key level. Near the end of the session, it is hovering around 19.35, modestly lower for the but still up 2% from a week ago. The short-term trend still points to the upside underpinned by emerging market concerns.

Today, other Latin American currencies turned positive against the US dollar. The Argentine peso gained almost 1% amid ongoing negotiations with the IMF while the Brazilian real rebounded after the dollar reached 4.20 and dropped to 4.13. The improvement in risk sentiment and a correction of the US dollar pushed USD/MXN back from 2-month highs. 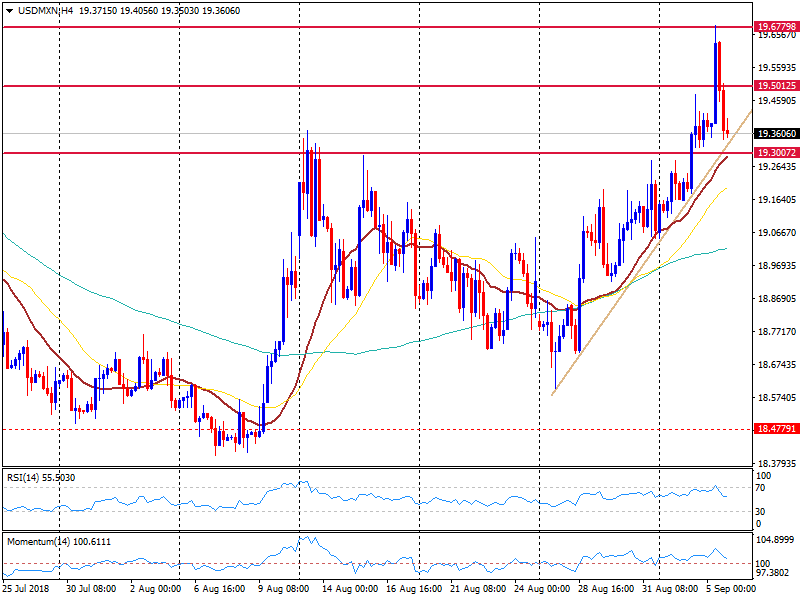 The bullish pressure eased today and from a technical perspective, USD/MXN failed to hold on top of the strong 19.50 area that continues to be a key resistance. A daily close on top could clear the way for 19.70 and above, attention would turn to 19.90/20.00.

Ahead of the Asian session, the bias favors the downside but the pair is approaching a key strong support: 19.30. The mentioned area is an horizontal support and also where a short-term uptrend line stands. A firm break below would remove the bullish pressure and could signal some consolidation ahead.