The US dollar as measured by the DXY index has been under pressure this week, so far, printing a lower low on Tuesday to 92.806 following a strong correction from the highest levels since November 2020 at 93.725.

There are mixed outlooks for the greenback from both a fundamental and technical point of view when compared to its major rivals and EM-FX.

The pause in the US dollar's positive trajectory started last Friday, just as it had busted through a key technical long-term resistance level at 93.437 following a surge in risk appetite.

Markets have been on edge recently as investors price in tighter money conditions in anticipation of the Federal Reserve tapering bond purchase that would be expected to pressure the stock market.

This was confirmed when the minutes of July’s Federal Open Market Committee meeting showed a majority of attendees said it might be appropriate to begin tapering asset purchases this year.

Equity investors have historically not liked bond tapering by the Fed.

Casting minds back to May 22 2013, an event dubbed the "Taper Tantrum," when the then-Fed Chairman Ben Bernanke stated in testimony before Congress that the Fed may taper the size of its bond-buying program known as quantitative easing (QE), the S&P 500 fell 3% over the course of just two sessions.

Yields on the 10-year Treasury rose from 2.010% to 2.1660% over the same period, thus dubbed the ''Taper Tantrum'' in money markets which gave some short term support to the greenback.

However, it is not a done deal this time around.

FOMC members continue to disagree about the future of the Fed’s quantitative easing programme and the central bank's staff have also expressed concerns about the robustness of the US financial sector.

While the decision to taper is far from certain, many market participants believe it would be a prudent course of action amid a strong recovery in the labour market this summer and rising levels of inflation.

This makes for the Fed’s annual Jackson Hole Symposium that begins this Thursday a critical event for financial markets and the US dollar.

Some are looking for an explicit tapering announcement from the Fed's chair, Jerome Powell.

However, less so than before Fed's Robert Kaplan diverged from his usual uber hawkish stance on Friday.

Kaplan vocally tempered his call for tapering by saying he may adjust his view if the delta variant were to curb the recovery which sent the US dollar off from its highs, leaving it back below a critical long term level on the charts, 93.50.

In this regard, the market is left waiting for the data and thus an announcement may come later at the September 21-22 FOMC meeting.

However, analysts still regard the Jackson Hole as probable support for the greenback.

''We expect Chair Powell and his colleagues to continue moving the tapering discussion forward and so a hawkish tone should emerge from the symposium,'' analysts at Brown Brothers Harriman argued.

''We remain dollar bulls. That the dollar continues to gain despite low US interest rates confirms our view that as bad as things may get in the US, the rest of the world looks even worse.''

''Dollar bears should be asking whether the euro or sterling look that much better than the dollar.''

''In that regard,'' the analyst said, ''EM will likely remain under pressure. Not only are the vaccine roll-outs lagging in EM, but the more hawkish Fed and a stronger dollar should also continue to put downward pressure on EM FX.''

However, the analysts also stated, that ''if the outlook changes and the US economy slows significantly, then it would be a likely game-changer for the dollar.''

Meanwhile, coming back to the present, markets seemed to have set aside concerns about the spread of the Delta coronavirus variant which has dented the US dollar.

Risk appetite in global markets strengthened after the US Food and Drug Administration on Monday granted full approval to the COVID-19 vaccine developed by Pfizer PFE and BioNTech BNTX in a move that could accelerate US inoculations.

However, COVID-19 case counts are also being watched closely, particularly in China, Australia, Japan and New Zealand which gives the US dollar a probable safe-haven bid over the medium term.

Nonetheless, the charts do not lie and the DXY is struggling to keep its head above bearish territory on the longer-term time frames.

The bulls need the price to close above 93.50 from a longer-term perspective. In doing so, it will have cleared the long term resistance structure, including the weekly 200-SSMA, which marks the line between bullish and bearish territory.

From a daily perspective, the bears will be in play again on a break of trendline support and horizontal structure below 92.80:

For bulls, at least for the near term, it will be imperative that US 10 year yields extend beyond 1.3020% daily resistance and break ice above 1.3810% to confirm the bullish bottoming candle formations.

We have a bullish hammer printed on July 20, followed by a double bottom on Aug 4, although this was followed by a failure of a restest of old resistance structure near 1.2950/1.3030: 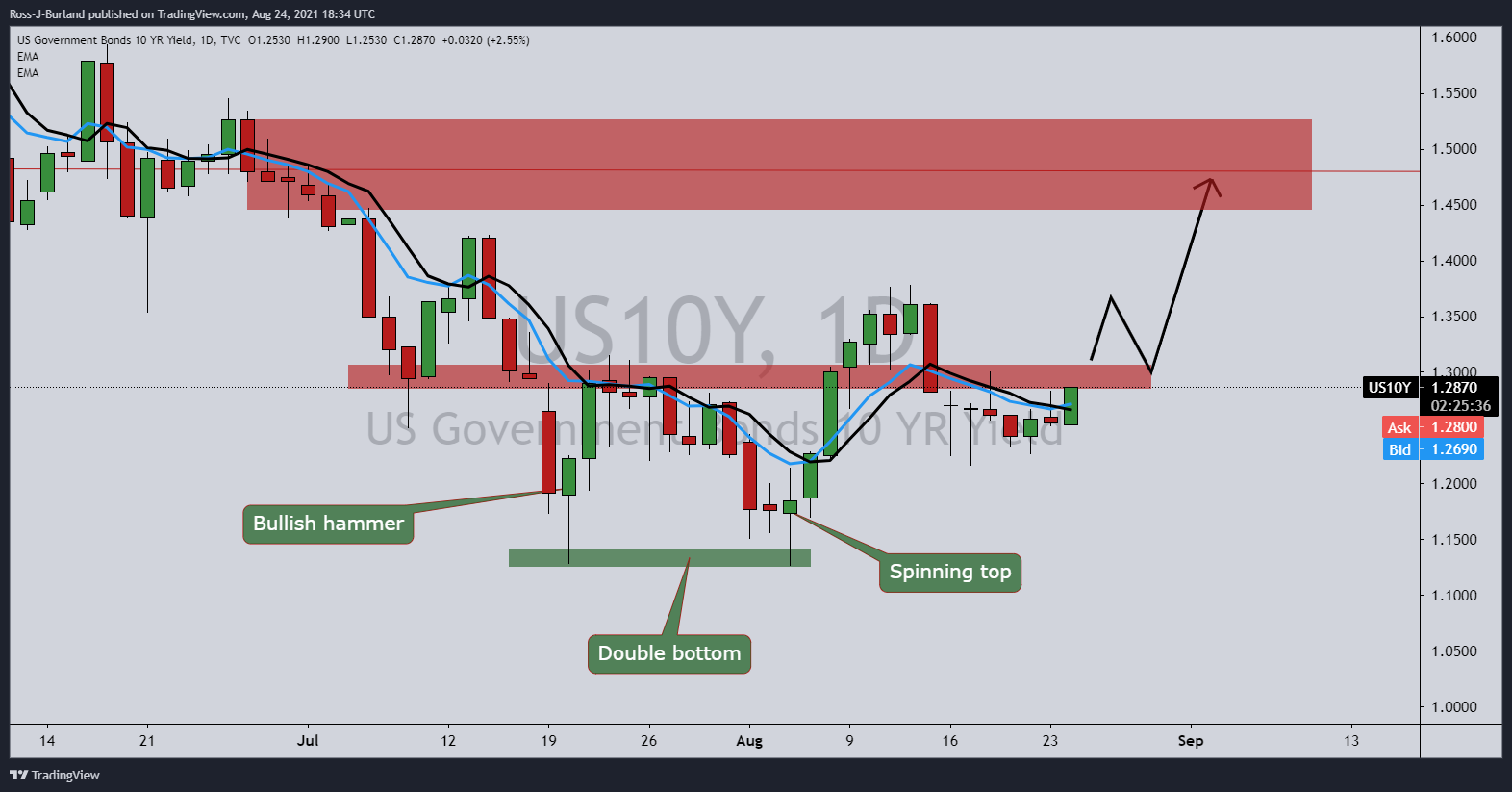 Meanwhile, contrary to the bullish outlook for the US dollar, analysts at Commerzbank argue that technically, the US Dollar is in the embryonic stages of reversal.

''Yes there is more work to be done, but failure moves higher by USD/CAD and USD/SEK and rebounds from the 55-week ma on GBP/USD, not to mention a potential reversal pattern on EUR/USD, imply weakness for the US Dollar going forward.''

''The dollar has challenged the March high 93.44, and failed – this adds weight to the idea that this was only a
correction and the Dollar is back under pressure,'' the analysts said in respect to the weekly chart.