UPDATE: Tesla stock is trying in earnest to hold onto the $900 price level. This is the fourth session in a row that TSLA has traded near the $900 level but refused to fall below it. Shares are currently flat at $112.60 one hour into Thursday's session but have traded as low as $905.56. On Wednesday Tesla stock traded down to $900.10, just a smidge above the major psychological level. Falling beneath $900 will likely see the short-sellers pile in to push the stock down to support at $860 or $840. The stock has traded as high as $918.40 in the session but has few takers as all four major indices are down between 0.1% and 0.25%. Tesla shares have been losing steam since the EV leader effected the second part of a double top on August 15.

Tesla (TSLA) failed to break the key resistance at $945 on Tuesday despite a huge rally in some meme stocks. While Tesla is not a meme stock per se, it does always make it into retail's most favorite lists and has a hugely loyal fan base among retail traders. Tuesday the stock looked set to push higher as it opened and tested $945, but the stock retraced to close at $919.69, which was in the red for the session.

Elon Musk has been busy overnight tweeting about buying Manchester United (MANU), which sent the stock higher in afterhours trading. Tesla, meanwhile, was lower following what has been a strong move this past month. Tesla's stock has rallied over 50% from the June lows, so really it is no surprise that it is now struggling for momentum. The equity rally across the main indices has also slowed as investors reassess the thought of further Fed rate hikes.

Can TSLA stock go to $945? If so, then a move to $1,000 would be likely and may signal the stretched, overextended nature of this rally. Given the aforementioned 50%-plus gain in a little over a month though, we may already be at the exhaustion point of this rally. The risk-reward in our view is, therefore, skewed to more downside, and we look for shorting opportunities. Currently, the high from Tuesday makes for a compelling bearish double top formation on the daily chart, with double highs on August 4 and 16.

If that plays out we would expect TSLA stock to move back to $750. We also have a bearish divergence between the Relative Strength Index (RSI) and the Money Flow Index (MFI). Both have trended lower from August 4 to 16 despite the double top. Our only caveat is the Tesla stock split is due on August 25, which would see a rush of retail buyers. Stock splits have a strong track record of being bullish short-term catalysts. That rally could provide a subsequent shorting opportunity. Note that it is a 3-for-1 stock split, so expect Tesla to trade in the $300s after. 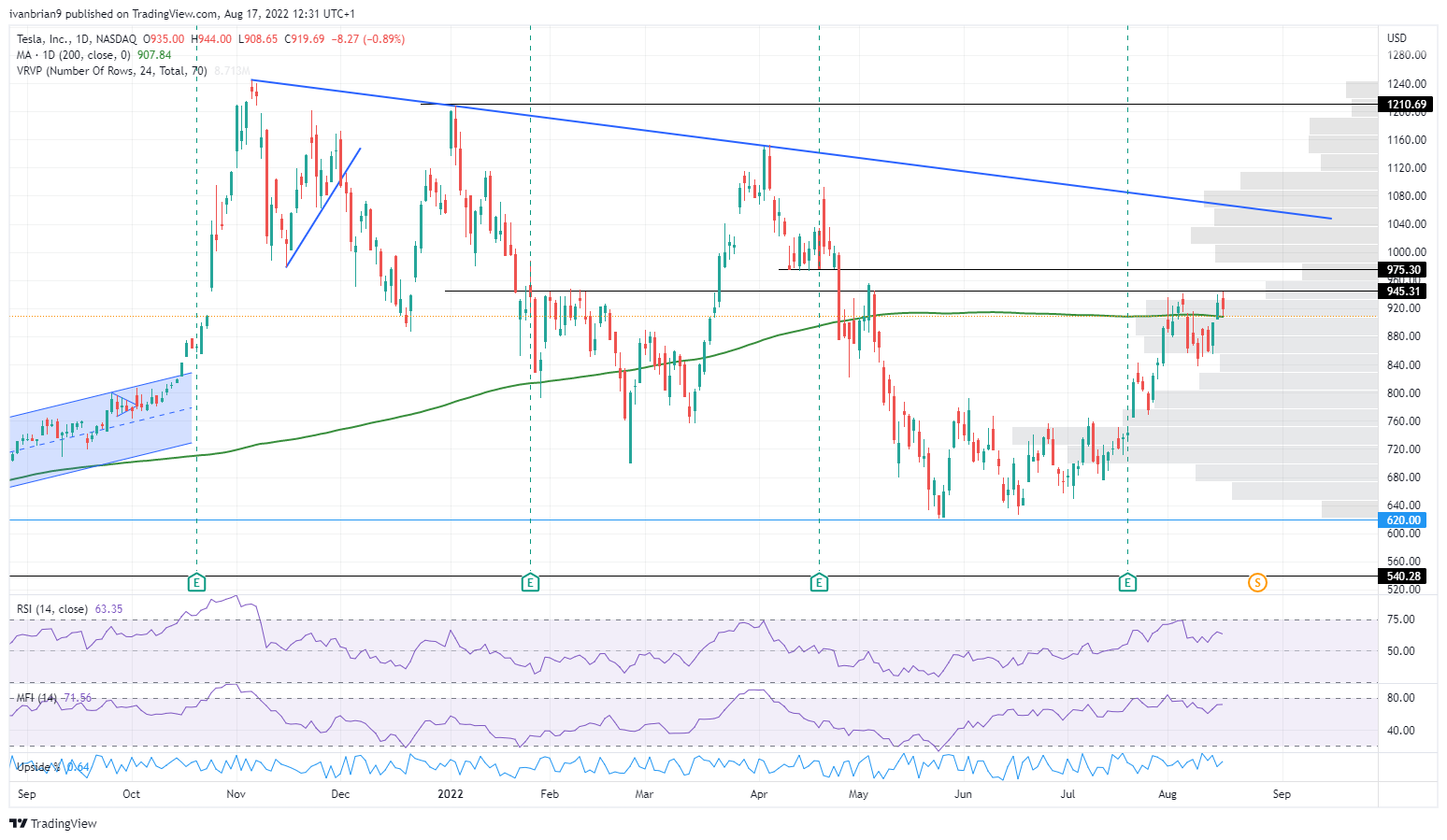 Update: Tesla stock price extended correction from a three-month high of $944 into the second day on Wednesday, closing the day 0.84% lower at $911.99. The Electric Vehicle (EV) making giant tracked the losses in major Wall Street, as relatively dovish Fed minutes failed to offer any reprieve to the market. The minutes revealed that the board agreed last month on the need to eventually dial back the pace of interest-rate hikes. Besides, the shares were reeling from a tweet by Tesla Chief Elon Musk, in which he jokingly said to buy football club Manchester United Plc. “I’m buying Manchester United ur welcome,” Musk said in a tweet. Amidst the pullback, Tesla shares managed to find a flloor at the $900 threshold.

Update: Tesla stock ended Wednesday down 0.84% at $911.99 per share, baring pretty well with the turmoil triggered by Elon Musk earlier in the day. The company owner "joked" about buying Manchester United, triggering some temporal noise, later overshadowed by the Minutes of the latest Federal Reserve Meeting. The document showed that US policymakers unanimously agreed to hike rates by 75 bps, seeing a slowing pace of hikes at some point. It also read that many Fed officials saw the hazard the Fed could tighten more than necessary. Furthermore, some participants said the policy rate would have to reach a “sufficiently restrictive” level to control inflation and remain there “for some time.”

Stocks pared their early slumps and bounced after the news, although they quickly resumed their slides. The Dow Jones Industrial Average finished the day down 171 points, while the Nasdaq Composite shed 1.25%. The S&P 500 lost 32 points or 0.76%.

Update: Tesla stock is experiencing some selling pressure at the beginning of Wednesday's session. TSLA shares are currently trading down 1.7% at $903.84 about 55 minutes into the session. Shares, which opened at $910.19, have traded as high as $917.34 and as low as $902.11 in the first hour. Shares have mostly been trending lower since Tuesday's open that reached as high as $944. 21,742 put option contracts for the $900 strike price expiring this Friday, August 19, have traded this morning. The last price was $14 a share, which has jumped 41% from Tuesday.