Is this a bear market rally? If so a move of 20% makes this a significant rally and one that has caught many investors offside. At least we have consistently outlined the risk-reward was favoring this rally, but we felt it would run into resistance at $415. Sentiment and positioning indicators had just become too bearish, and the pain trade was a move higher. We use the term "pain trade", because that is the market norm: to exert pain on the maximum number of participants.

On average 90% of traders lose money, so that means pain for 90% and that is why those who go against the herd are usually the printable ones. Let us take a step back to early June and look at what the herd was saying. The economy is doomed, and a deep recession is imminent. Stocks will fall, oil is the haven, and the dollar is king. Since then stocks are up 20%, oil is down sharply, and the dollar has also struggled. Consensus is rarely the place to be in trading. That is why it is so difficult. Hence the pain trade.

Now for those who say, "Those who cannot do, teach,"  a little lesson in psychology. 90% of traders lose money, but demo trading accounts show much higher levels of profitability. The main reason being emotion is removed from the trading decision when using a demo account. If you are long in the tooth with experience, sitting afar from the action means impartial and often accurate advice can be given. My account is a hobby account and wildly profitable this year. In all likelihood that performance would dip sharply if I was to scale it up to a level where my emotion would activate.

This is why advisory services can help, but picking the good from the bad is the tricky part. Look for consistent impartial and unemotional advice. For example, that offered by our premium service. Take a look – we now have a discord channel where you can interact directly with our analysts in FX.

Now back to all things equities. Equities diverged notably on Monday. We got some poor economic data from the US, which saw falls in oil and commodity markets, but equities just closed higher. A lot of the riskier sectors began to stall, with meme stocks registering losses while big tech kept the indices higher. Overnight news of China insuring bondholders in the property sector is not exactly comforting. We have reached some key resistance levels in the indices but also some big tech names. Apple (AAPL) stock, for example, has rallied over 30% from the June lows and is now up against trend line resistance. It is also strongly overbought versus the Relative Strength Index (RSI). See our Apple news here. 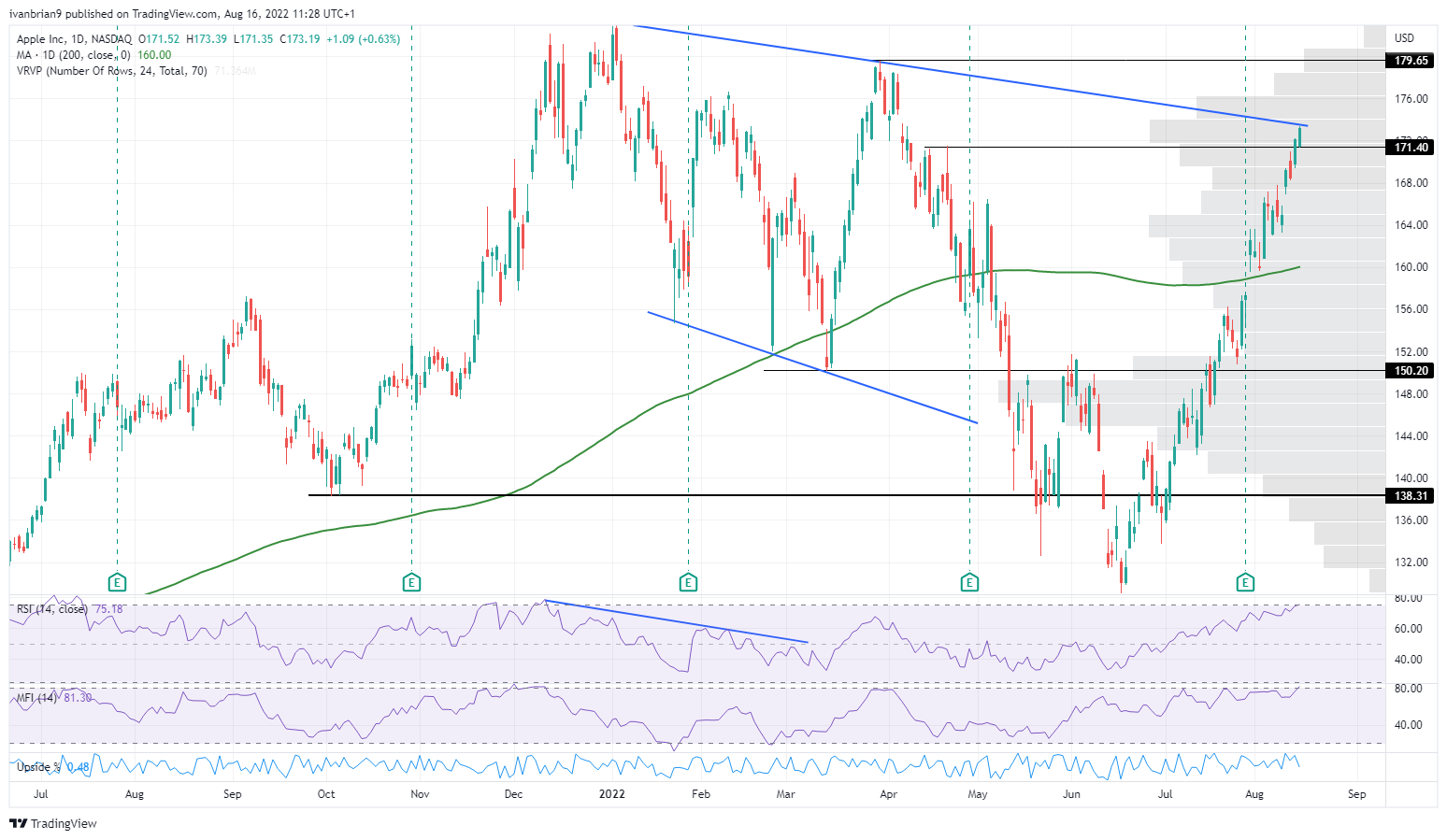 Tesla is also running into resistance at $945 and failed here already, so a bearish double top is a possibility. 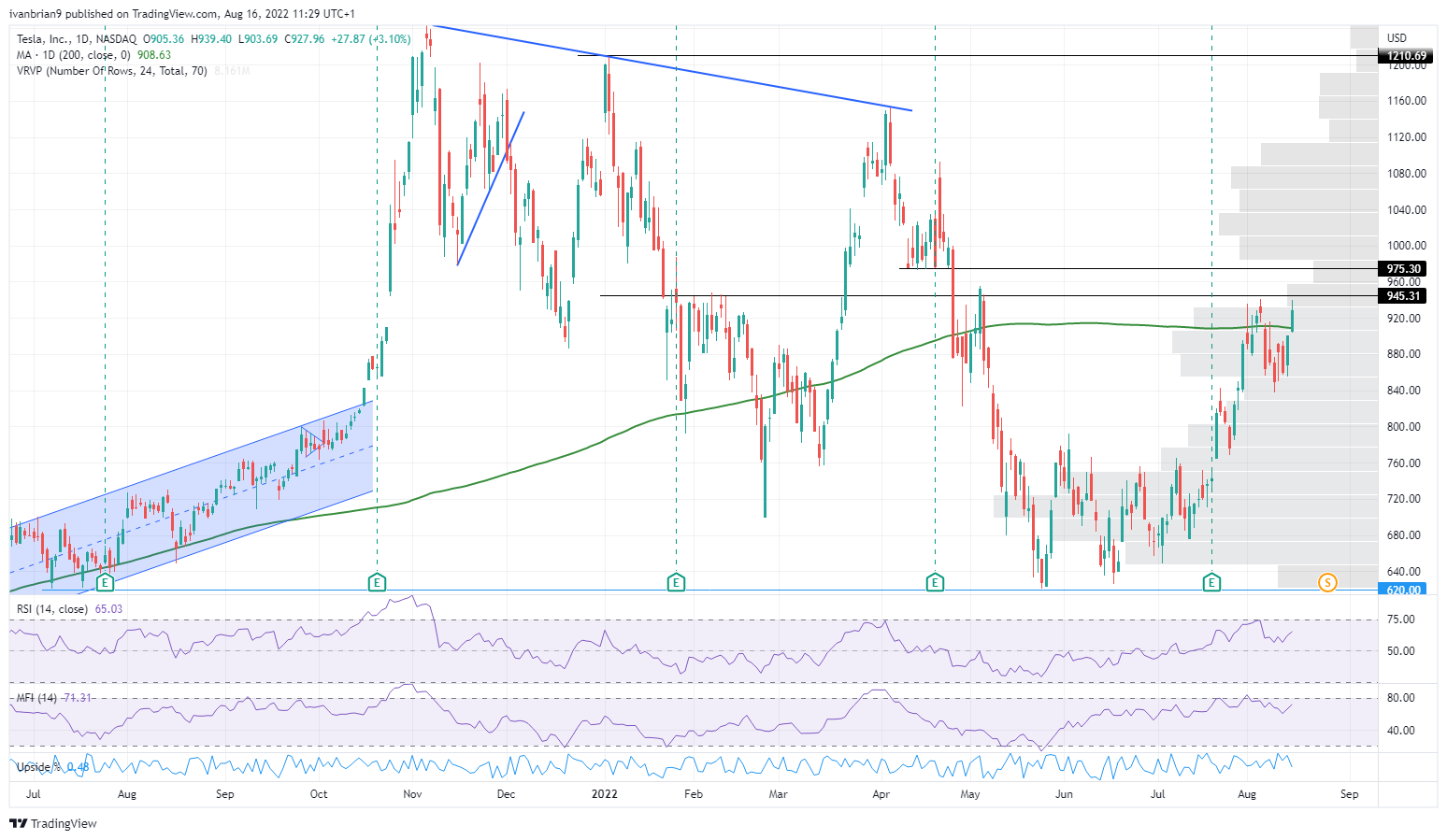 In S&P 500 (SPY) land, the rally has now started to get serious and squeeze people. Now we move into some key zones. The 200-day moving average is at $431, and then resistance is at $435. If we get through the $431 to $435 zone, the next zone is up at $458! Also, note that the SPY is now flashing overbought on the Relative Strength Index (RSI) and the Money Flow Index (MFI), so this move is getting harder to sustain. Time for some consolidation if not outright falls. Macro is still weakening, but positioning is still too bearish for this rally to flip, so our money is on some form of consolidation. The pain trade is still higher. 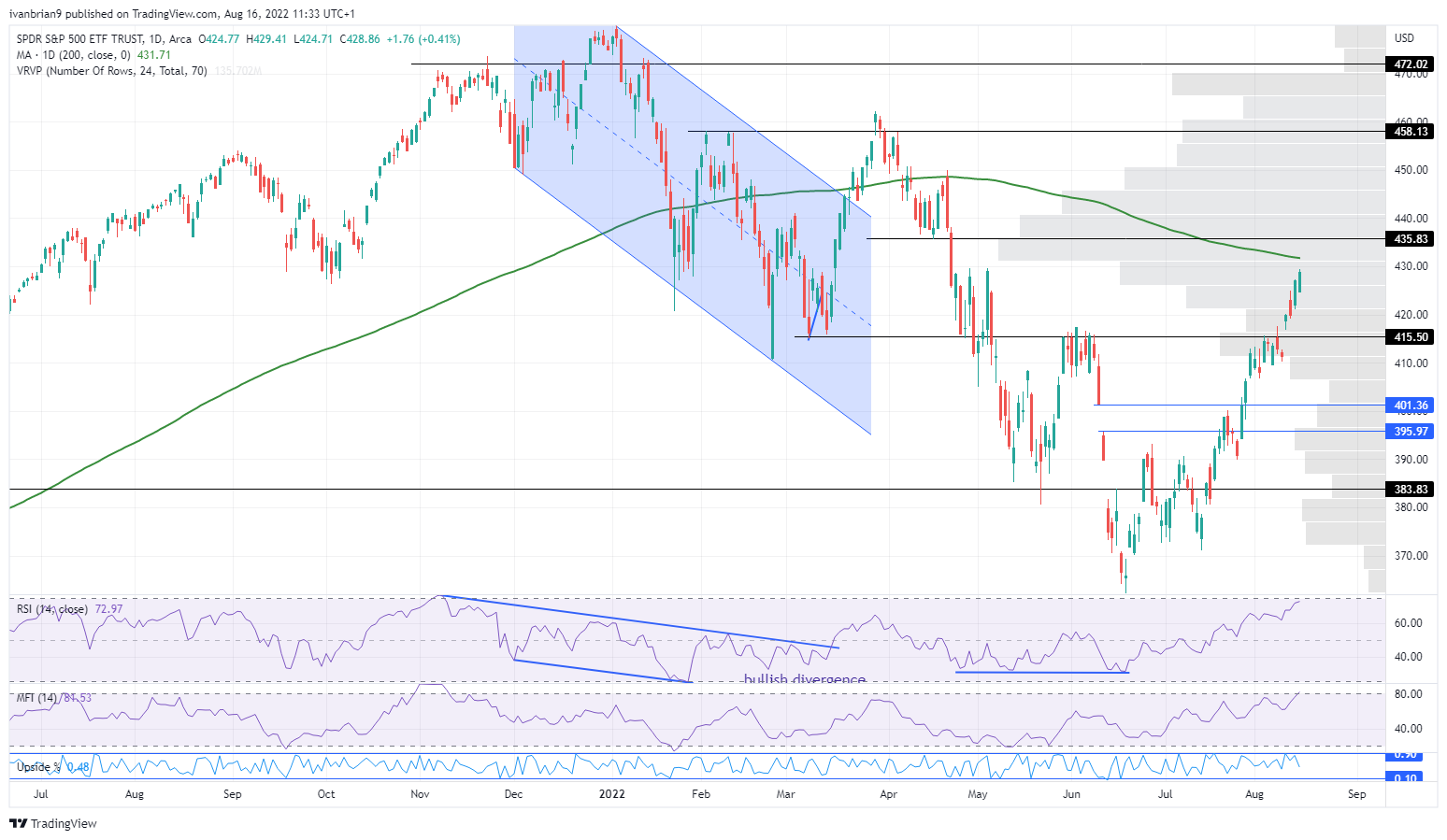