Silver (XAG/USD) edges lower during the New York session, down 0.80%, trading at $23.47 at the time of writing. The market sentiment is downbeat and has been like that since Monday when US President Joe Biden renominated Jerome Powell to the Fed for a second four-year period. That benefitted the greenback, with the US Dollar Index closing to the 97.00 figure, sitting at 96.89, up some 0.42%.

Meanwhile, US bond yields are down, except for the short-term ones. The 2-year and the 5-year are rising three and one basis point each, sitting at 0.64% and 1.34%, respectively. The 10-year US Treasury yield is down one basis point, currently at 1.65%.

Further, despite that nominal yields in the long term are lower, real yields have jumped from -1.91% up to -1.67% in the last couple of weeks, thus weighing on the non-yielding metal, as it seems investors start to price in higher interest rates in the US in 2022.

The US economic docket featured the Initial Jobless Claims for the week ending on November 20 increased up to 199K, better than the 260K estimated by analysts, the lowest since 1969. Moving to the Federal Reserve’s favorite gauge for inflation, the Personal Consumption Expenditure (PCE) Price Index increased by 4.1% YoY in October, in line with the median economist forecasts and confirmed a 0.4% rise from last month’s upwardly revised reading of 3.7%.

From the technical perspective, the white metal has been trading lower, leaving the 100 and the 200-day moving averages (DMA’s) above the spot price, whereas the 50-DMA lying at $23.53, is support for silver, though at press time, seems to be giving way to USD bulls. Further, the break of a two-month-old upslope support trendline on Tuesday opened the door for further downward pressure on the precious metal.

In the outcome of XAG/USD continuing lower, the first demand area would be the November 23 swing low at $23.27. A breach of the abovementioned would expose November 3 cycle low at $23.02, followed by the August 9 pivot low at $22.17.

On the other hand, if silver reclaims the $24.00 handle, that could pave the way for further upside. The first resistance would be the September 3 swing high at $24.87, immediately followed by $25.00.

EUR/USD is trading around 1.1350, paring back gains amid a rebound in the US dollar. The US Treasury yields remain lifted on the hawkish Fed outlook and a better market mood. Eurozone Final CPI, ECB minutes awaited.

Shiba Inu price is struggling to break out of the prevailing chart pattern formation as it continues to record lower highs. However, the governing technical pattern projects a 46% ascent toward $0.00004327. 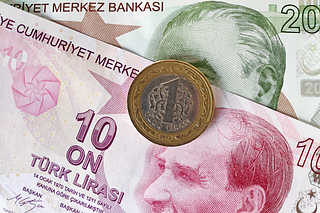 The Turkish Central Bank will announce its decision on monetary policy on Thursday, January 20. The CBRT is expected to remain on hold after slashing rates 500 bps.