Update: Palantir Technologies Inc (NYSE: PLTR) has been surging over 10% and trades at around $27.50 at the time of writing. That is the highest level since Christmas. Stock analysts are becoming growingly bullish on the analysts firm, despite its secrecy and as it expands its offering. One of the positive factors going for the firm backed by Peter Thiel is that is has contracts with the US government. President-elect Joe Biden presented a $1.9 trillion stimulus plan, and some of these funds may go to the firm. 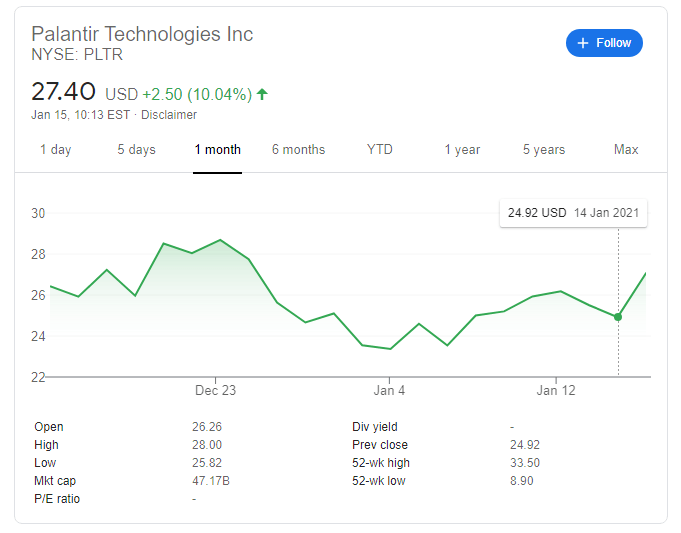 Update: NASDAQ: PLTR is holding its ground on Wednesday after edging lower on Tuesday. Zooming out of the daily ebb and flow, Palantir's shares are holding onto the $26 area, around the highs for 2021 so far. The recommendation from Jefferies keeps the analysis stock bid. Investors are also encouraged by the firm's involvement in efforts to curb coronavirus, a move away from more secretive defense contracts. Markets prefer more transparency.

Some investors perform their own research – and others jump on studies performed by others. That seems to be the case in the recent rise of Palantir Technologies Inc (NASDAQ: PLTR) which has risen by 2.90% on Monday and is set to gain an additional 1.50% on Tuesday, according to pre-market trading.

The increase to $26.32 would be the fourth consecutive day of gains, but still short of the $30 price target put by Jeffries. Brent Thill, an analyst at the renowned firm, boosted his objective from $18 and maintained his "Buy" recommendation, adding a "Street High" characterization.

Thill also cited the company's unique offering of high-end data analysis and expected robust growth. Not all is known about the company founded by Alex Karp and received investments from Peter Thiel and others. The company came under criticism for its contract with the US Immigration and Customs Enforcement (ICE) over family separations.

Palantir heavily depends on contracts from various branches of the US government, including the Department of Defense. It also has clients in banking and other financial sector companies. The Denver-based company has also had a role in supporting Britain's National Health Service in the current coronavirus crisis. 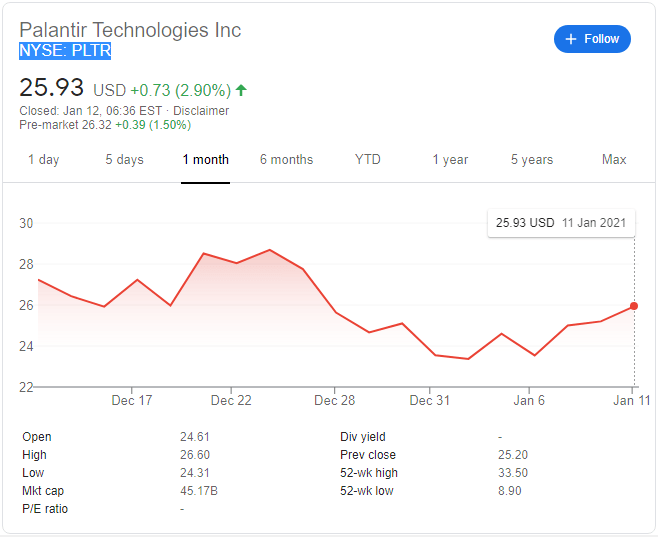 The $30 level is in sight according to Jeffries, but the road ahead may be more tricky. The firm is already valued at over $45 billion and has suffered a fall in December, partially due to sell recommendations. With that hurdle over, there are still other issues weighing on PLTR.

One concern is the expiry of founders' IPO lockup period – which currently forbids insiders to sell their stock. The chains will fall sometime in February when the company publishes its earnings.