Palantir Technologies was one of the darlings of the first retail revolution back in January when the Reddit community pushed the PLTR stock price from $26 to $45 in a matter of days. Since then the stock has languished and slid back to a low of $17.06 in May. From here things have started to pick up nicely and quietly for the software firm. Earnings on May 11 were solid if unspectacular with EPS in line, while revenue was $10 million ahead of analyst estimates.

Palantir also announced a few days later that it had a new contract worth $32.5 million with the US Space Force and Air Force. The US CDC (Centre for Disease Control) has also recently announced a renewal of its partnership with Palantir. The earnings release had seen the shares take a brief spike lower to bottom out at $17.06 as mentioned, but since then it has been all one-way bull traffic.

Should I buy PLTR now?

Wait for confirmation. That is the quick answer in this author's opinion. Some key levels are approaching, and some interesting potential makes a PLTR forecast dependant on a few key levels. First, PLTR has run into huge resistance at $24.70. This is the point of control since Palantir's IPO. The point of control is the price at which there has been the highest volume over the period in question. In this case, since IPO, it is the fairest price or the price that buyers and sellers transacted at the most. In effect, it is an equilibrium, so it will be a strong resistance to break. However, buying a break of this level is where things could get interesting.

The volume profile on the left of the chart shows the lack of volume above this key $24.70 level. The volume totally thins out above $25.40, and this could be a good entry point for a breakout as it will confirm the break of $24.70 and the 100-day moving average. Once above $30, there is a vacuum of volume that could accelerate any price moves. The issue is a pullback is quite likely on the first test of any resistance. Before $24.70 goes, PLTR shares could retrace toward the 21-day and 50-day moving average convergence as a support at $22.90. $20.97 is also a strong support. Realistically a break of $20.97 is too much and ends the bullish setup.

The Moving Average Convergence Divergence (MACD) indicator has also been trending lower since December 2020. Look to this for a confirmation of the breakout setup. No technical indicator is perfect, but the more that align, the more risk is in your favour. Trading is not about being right all the time. It is about managing the probabilities and putting the risk-reward profile in your favour. That is how profit is consistently made. 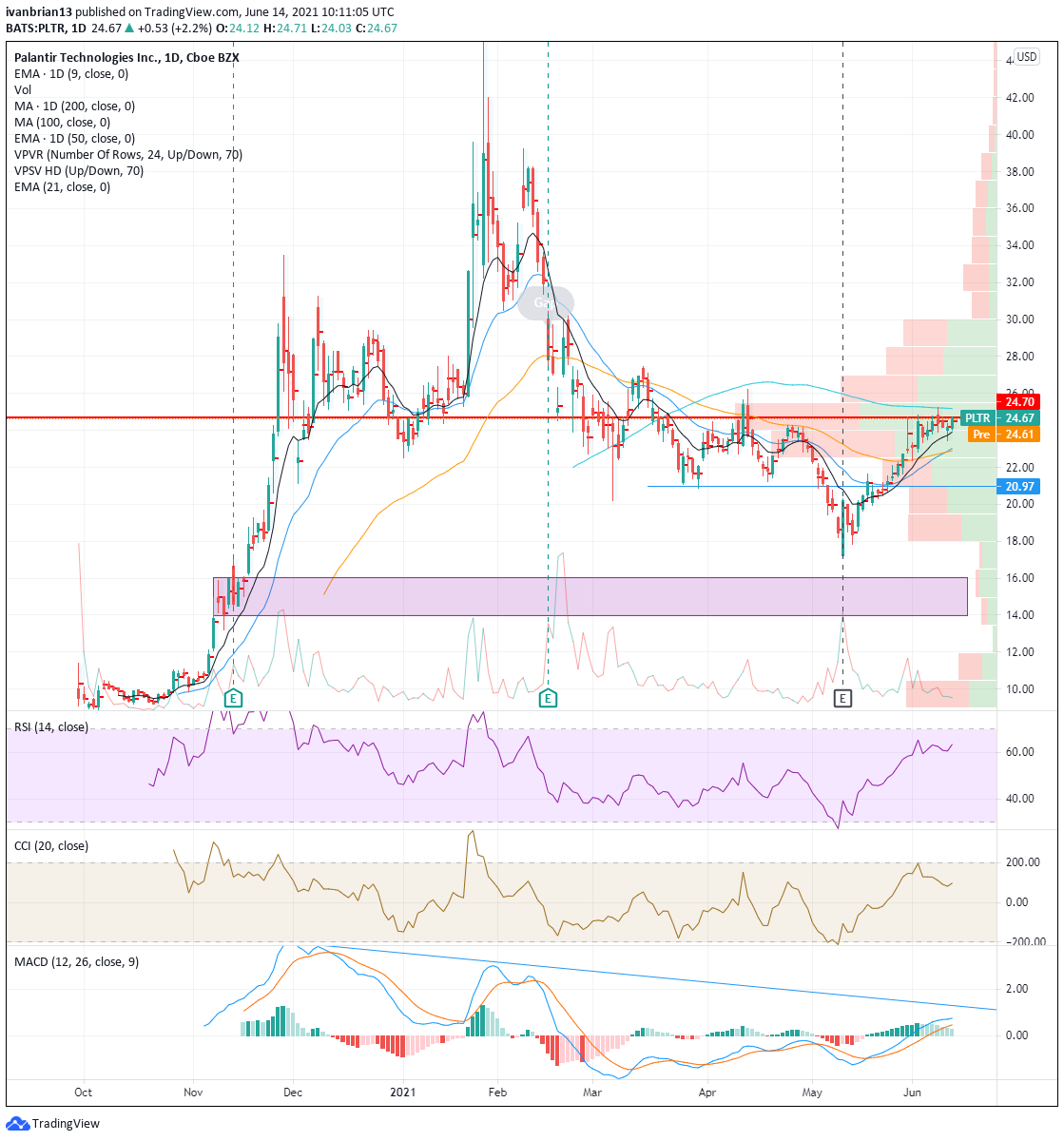