Equity markets remain in risk-on, fully bullish mode, and this has only increased as the week has progressed. The Federal Reserve last week set up the rally by having brought forward potential rate rises, and then known-hawk Governor Bullard mentioned that which dare not be named, tapering. Markets though were relieved as investors fretted over the possibility of runaway inflation and a 1970s-style inflationary cycle. The Fed has now dampened those fears, convincing investors that it is not asleep at the inflation wheel. That remains to be seen given the greatest money printing scheme in centuries, but for now, all is well in equity markets. The VIX had briefly spiked above 20 late last week as equities wobbled, but this week's steady gains have seen VIX back to snoozefest levels around 15-16. Similarly, the 10-year yield has not even bothered to move, remaining below 1.5%.

The Nasdaq remains the index of choice this week as it leads most others higher. No surprise given the relative underperformance for April and May. The comparison chart below shows the relative performance of the main indices since March. Notice how the Dow Jones (red line) has totally shed its leadership role with the Nasdaq now catching and surpassing the S&P 500.

Interestingly, the main feature of this recent rally has been the return to high quality, and this is obviously best exemplified by the mega tech names whose balance sheets are awash with cash but also have strong growth metrics. In June Apple has broken out of its wedge formation (see here), while Facebook (FB) and Alphabet (GOOGL) have set new record highs. Tesla has also powered through some key levels, helping push the Nasdaq along, see here. The chart below shows FB, AAPL, GOOGL and AMZN versus the Nasdaq. Amazon and Apple shares outperform the Nasdaq, while Facebook and Google just underperform though still setting new record highs.

All this does give the worry of broad market indifference and a potential lead coming from market breadth indicators. June has seen the Russel 2000 underperform and put in a potential double top, which will need breaking if the rally is to continue. Also falling are the number of stocks making new 52-week highs and the number of stocks trading above 100 and 200-day moving averages.

This Russell 2000 potential double top needs to be broken to maintain the rally. 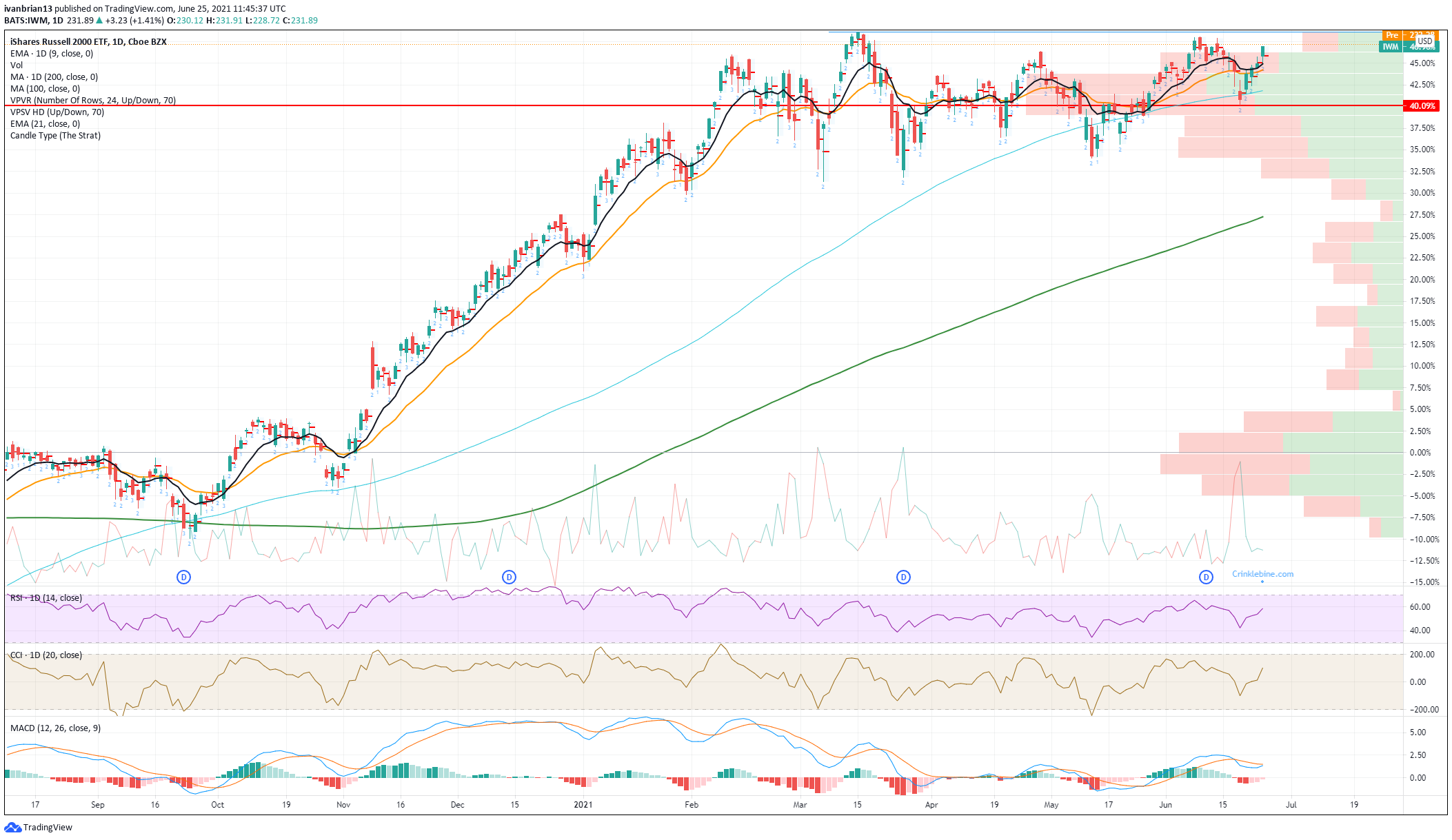 The futures (NQ1) E-mini contract is used for our analysis, but the levels are matched to the QQQ Nasdaq ETF. The strong trend remains in place with Thursday's nice continuation candle. The 9-day moving average remains the guide for the short term with 14,250 the key support. The volume profile is still pretty light up here, so the rally has not yet gained steam. A break, therefore, of 14,250 would likely see a quick intraday scalping possibility to move to 14,050. This would be the first support to test since it is the old high from April and now the bottom of the trend channel. The Relative Strength Index (RSI) is very close to overbought. Key supports are 14,050, 13,462 and 12,950. 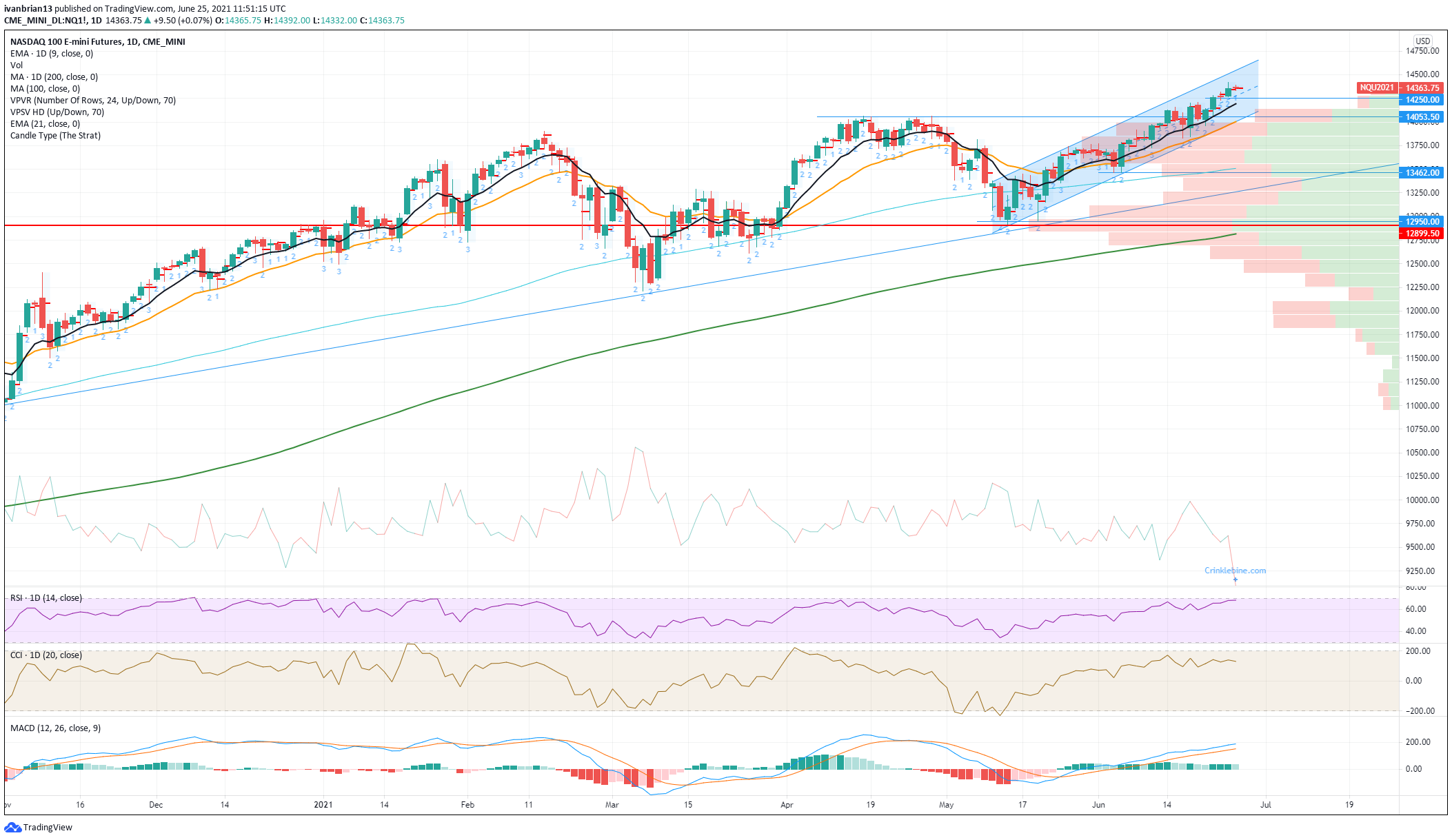