Apple shares remain in a confident uptrend after a slowdown phase on Thursday. The recent move was long overdue given the subdued reaction to Apple's earnings on April 29. Apple (Nasdaq: AAPL) stock traded up to $137 immediately after that earnings release. Those results were pretty stellar, coming in 40% higher than the average Wall Street analyst forecast. Apple also upped its buyback program as well as increasing its dividend. However, as mentioned, May was a tricky month for the Nasdaq, and Apple suffered as the month wore on, slipping to $122. June has been kinder to AAPL stock, with the shares finally seeing some bid action and pushing steadily back to test key resistance levels, the next test coming at $137.

Apple shares were lagging some other big tech names for most of June but have finally roused themselves. Facebook (FB) again set record highs Thursday, having broken the previous record set on Wednesday. Though AAPL shares have moved higher, they remain well below record highs. AMZN remains within touching distance of record highs, and Alphabet (GOOGL) also set new highs on Wednesday and is sitting just below that record after the Thursday session. The chart below compares AAPL, FB, and GOOGL shares since the end of April when Facebook, Alphabet and Apple all released strong results. Facebook is up 12% on the period, Alphabet (GOOGL) is up 6% over the same period, but AAPL stock is down 0.72% since the end of April. Seems like there is some catching up to do.

Finally, AAPL stock woke up and broke higher. The move was set up by the strong support zone in the mid $120s back in late May, early June. The 200-day Simple Moving Average (SMA), as well as a previous consolidation zone, combined to provide strong support. From here a steady rise began to accelerate and culminated with Apple shares breaking out of the wedge formation in place since March – a powerful bullish signal. Now the intermediate target is $137, the high from just after the release of the results. Above here the volume profile drops off, so resistance is thin. Therefore, a break should see an acceleration in price.

The risk-reward is therefore skewed to the upside. The 9-day moving average is guiding the trend higher, so look to any pullbacks to find support here as it nicely intersects with support from the wedge line. Thursday's candle was an engulfing indecision candle with a higher high but lower low than Thursday's. This shows the move may be stalling but is not a cause for concern just yet. Bulls remain in charge. Those that have missed the move could wait for a pullback to the 9-day and wedge line mentioned, currently at $131.68, or wait for a break of $137 and hope for a price acceleration. This could be a useful options play as a price acceleration will not only bring, for example a $140, call into the money, but the spike in volatility will also cause the option to increase in value.

As ever, careful risk management brings the most long-term sucess, so use the strategy that most suits your own needs. 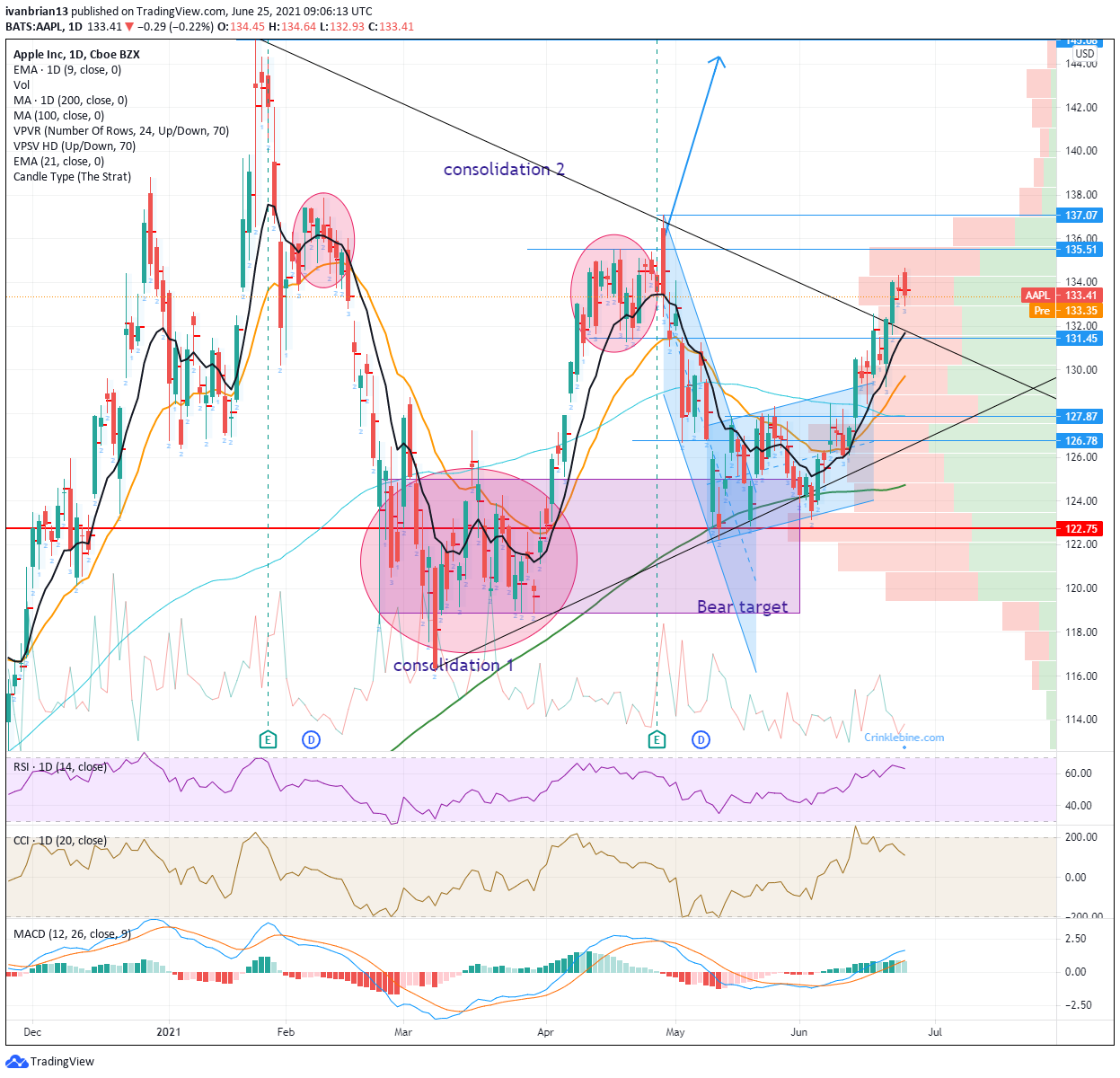