The Moderna (MRNA) quote got down as low as $232 on Tuesday in what continues to be an aggressive sell-off following news of alternative treatments for covid. Both Pfizer and Merck have taken one-two blows at Moderna this past few weeks, and the stock has suffered badly.

In October Moderna shares traded as high as $460, and they have now more or less halved in that short time period. Added to the negative catalyst were earnings that missed expectations. Moderna reported on November 4 and missed on both revenue and earnings per share (EPS) forecasts. Revenue came in at $4.97 billion versus the $6.07 billion estimate. EPS was $7.70, missing the $8.97 estimte.

MRNA has been under the cosh then from the development of covid antiviral pills from Merck and Pfizer. The UK has already approved Merck's pill for use and made significant orders while the US also has orders in place. France was out with news on Moderna's covid vaccine yesterday with the health regulator saying Pfizer BioNTech vaccine should be used in for under-30s if available.

Germany has made a similar statement this morning if not somewhat stronger. The German vaccine committee STIKO says it recommends under 30s only be given the Pfizer BioNTech vaccine. The European Medicines Agency is also out this morning saying it has begun to evaluate the use of Moderna's Spikevax covid vaccine for children aged between 6 and 11. The EMA says it will take approximately two months to reach a decision.

Take note of an article in The New York Times on Tuesday, headlined "Moderna and U.S. at Odds Over Vaccine Patent Rights". The article says, "The federal government could have more of a say in which companies manufacture the vaccine, which in turn could influence which countries get access. It would also secure a nearly unfettered right to license the technology, which could bring millions into the federal treasury."

The Moderna forecast is now looking decidely negative with a host of headwinds lining up. We have the earnings miss, counter treatments from Pfizer and Merck, France and Germany preferring the Pfizer/BioNTech vaccine for under 30s, and now a strongly negative trend with Moderna trading below the 200-day moving average. This puts Moderna bearish across all timeframes. Resistance is at $253 from the 200-day moving average and $265 from the yearly Volumed-Weighted Average Price (VWAP). The gap is at $278. Supports are $188.41 and then at $157 where we have large volume, so this may be a place to buy the dip. 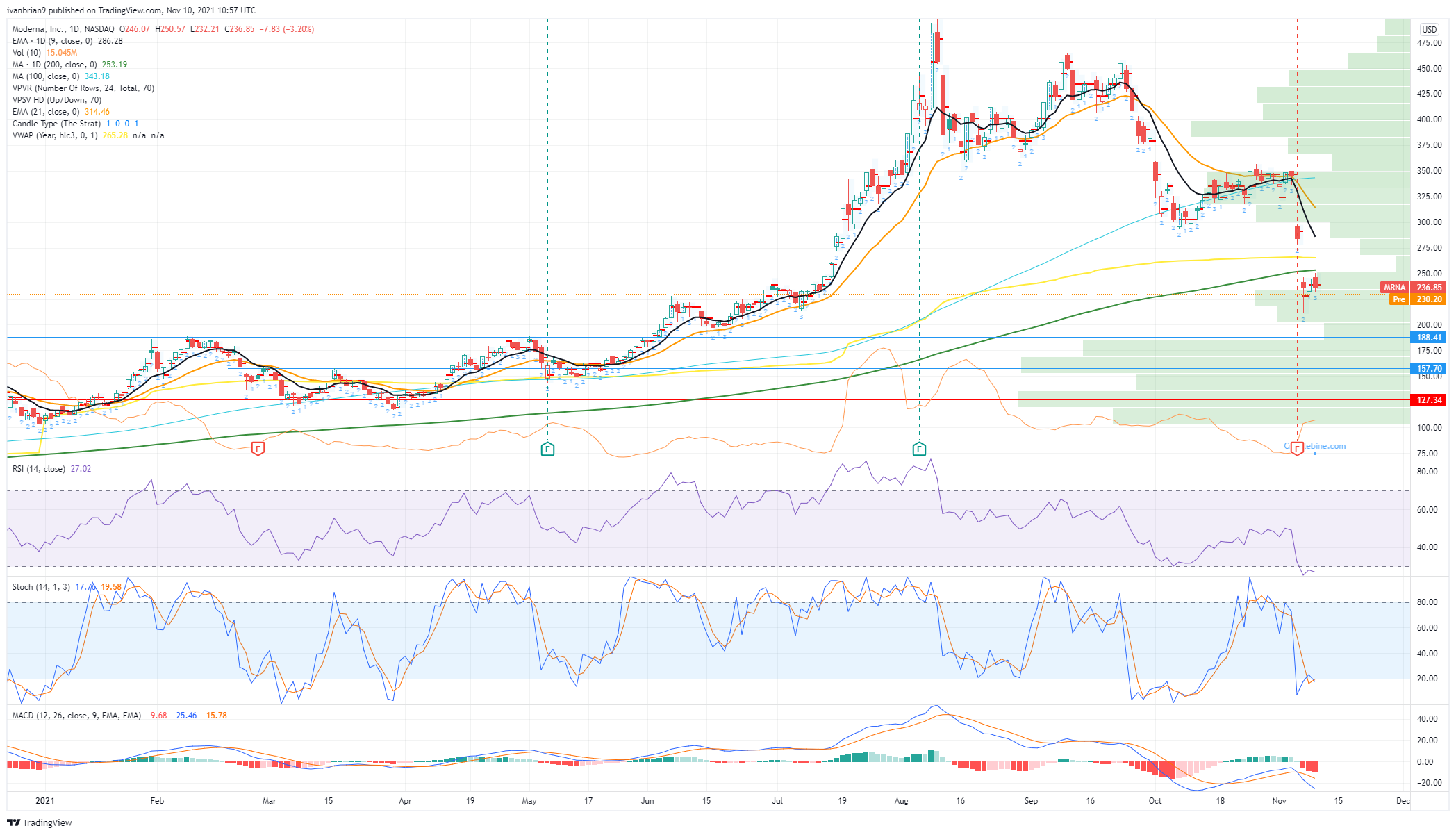