Gold is under pressure despite the weakness in the US dollar. At $1,823, the price is down by some 0.23% while the US dollar is also underwater, currently down by 0.18%. The greenback has struggled versus its major rivals at the start of the week due to the prospects of softening inflation which has given cause for a reassessment of the projected path of the Federal Reserve.

As a consequence, the greenback has been tipped over to the edge of the abyss as per the technicals illustrated in the prior analysis as follows:

In the above analysis, the greenback was forecasted to break the structure and head lower to the area of imbalance of price towards 103.00. 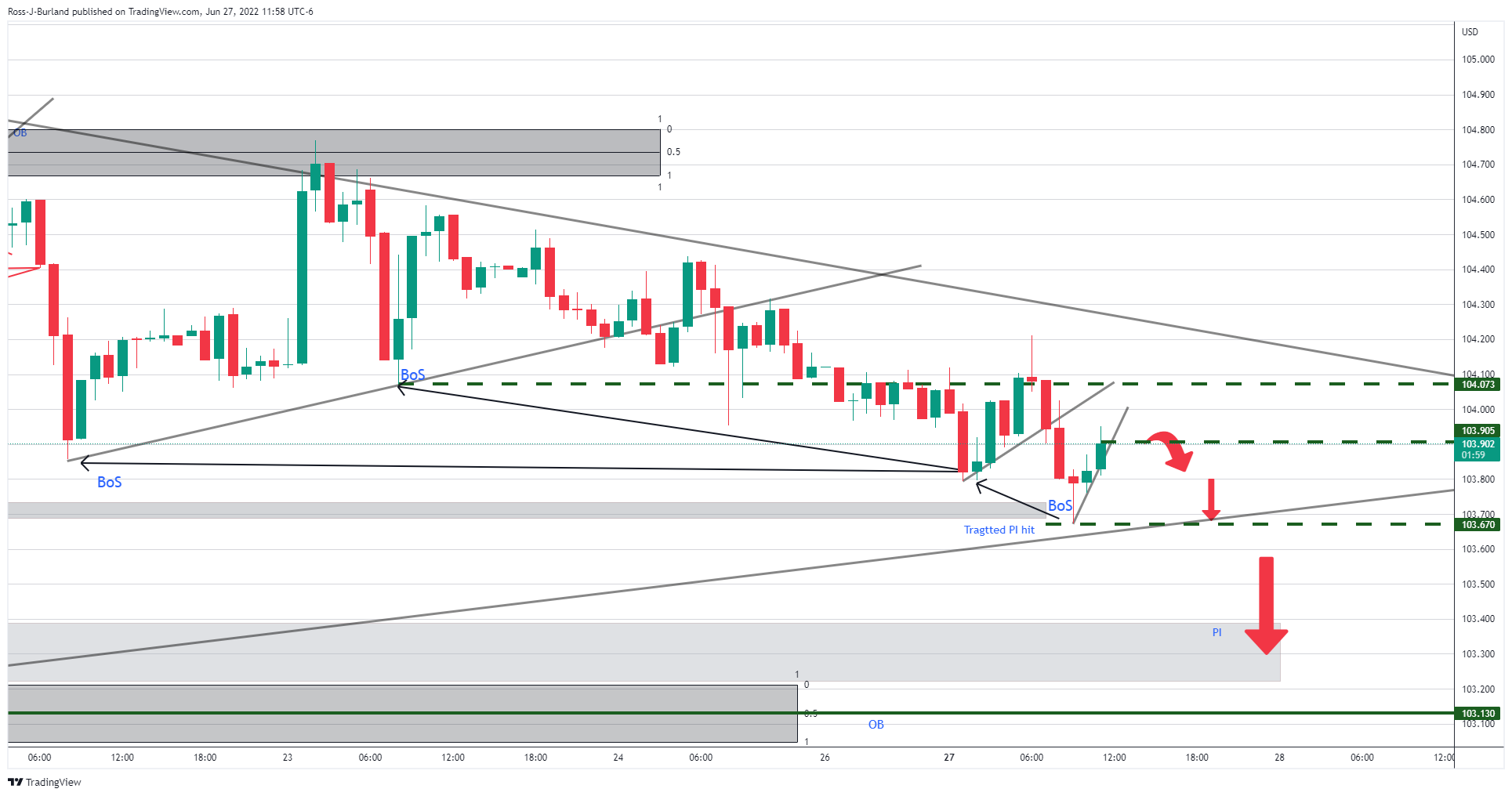 The price has followed the trajectory and is currently mitigating some of the imbalance following a fresh break of structure and this could be significant in the schematic of the gold price on the charts below.

Key US and ECB events

Meanwhile, the week ahead is going to be focused on Core PCE prices that have likely advanced firmly in May. Wjwta will be important is whether or not they will still be at a somewhat slower pace than the core Consumer Price Index (0.5% vs 0.6%). Additionally, US manufacturing surveys that have already been released point to a notable deceleration in activity in June. The Dallas survey today was very poor, -17.7 vs -3.1. Tomorrow we will have the Richmond report that is expected to show a move to -5 vs. -9 in May. Overall, the outcome of these data points this week will serve to move the needle with respect to the Federal Reserve's tightening expectations.

Currently, the WIRP suggests a 75 bp hike at the next meeting July 27 is 85% priced in, about the same as the start of last week, while 50 bp hikes at the subsequent meetings on September 21 and November 2 are almost fully priced in, analysts at Brown Brothers Harriman noted. ''Looking ahead, the swaps market is pricing in 200 bp of tightening over the next 12 months that would see the policy rate peak between 3.50-3.75%, down from nearly 4.0% at the start of last week.''

Meanwhile, there will be a focus on the European Central Bank and the euro. Hawkkishness there could see the dollar weaker and support gold higher. The ECB forum begins tonight in Sintra, Portugal. which is the ECB’s version of the Fed’s Jackson Hole Symposium. Euro-area inflation will be coming out this week as well and this likely rose further in June due to broadening price pressures and investors will look to this to cement sentiment of a likelihood of a 50bps hike from the ECB in September and set the tone for more to come at later meetings.

Analysts at TD Securities argued that ''gold prices are also being pulled higher as rising recession risks drive inflows into the yellow metal. In turn, while gold bears are looking for catalysts to shake out the massive amount of potentially complacent speculative length from proprietary traders, recession fears have started to spark a bid for safe-havens, given this historically has led a pivot in Fed policy.'' 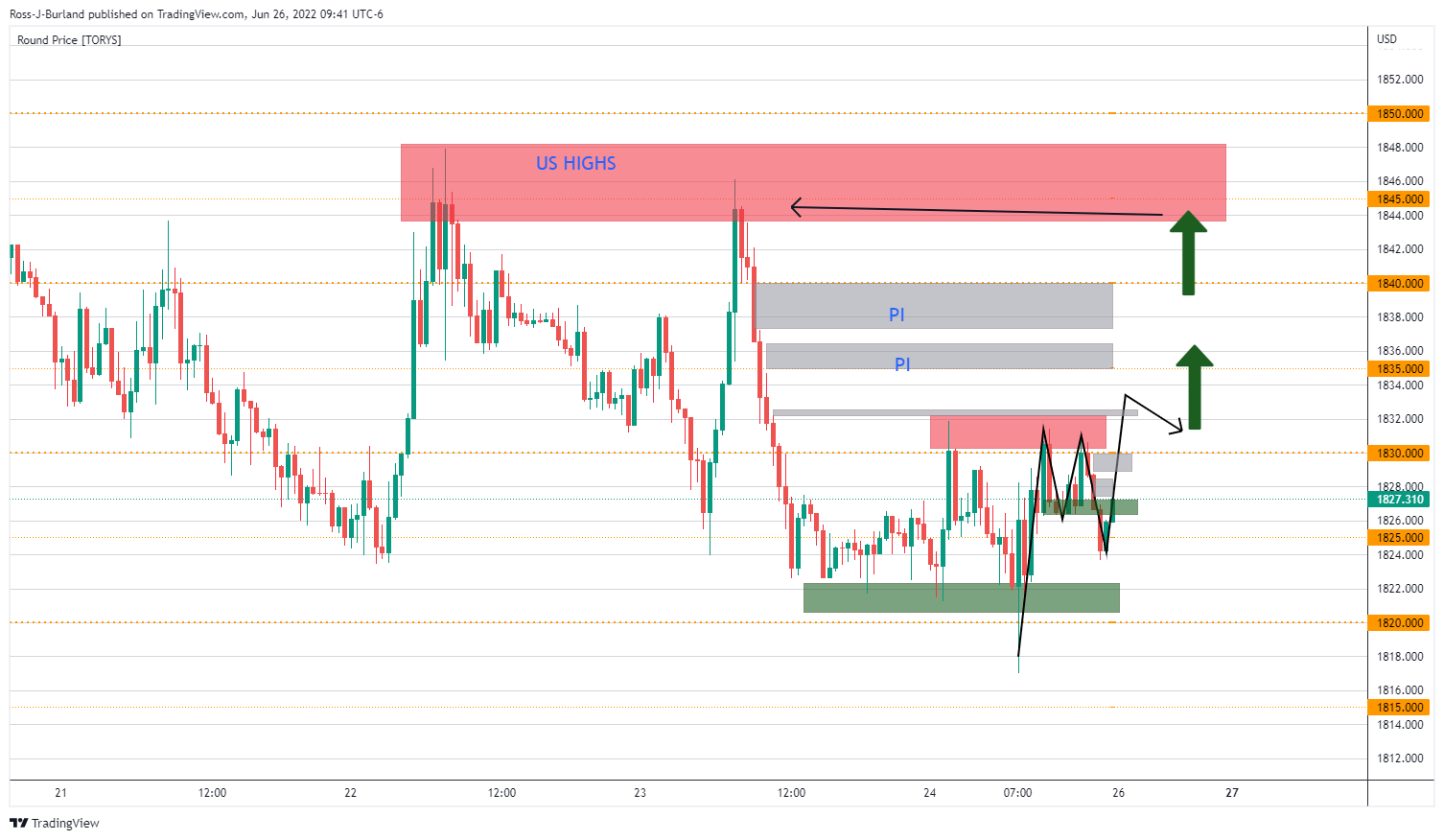 We have seen two way price action since: 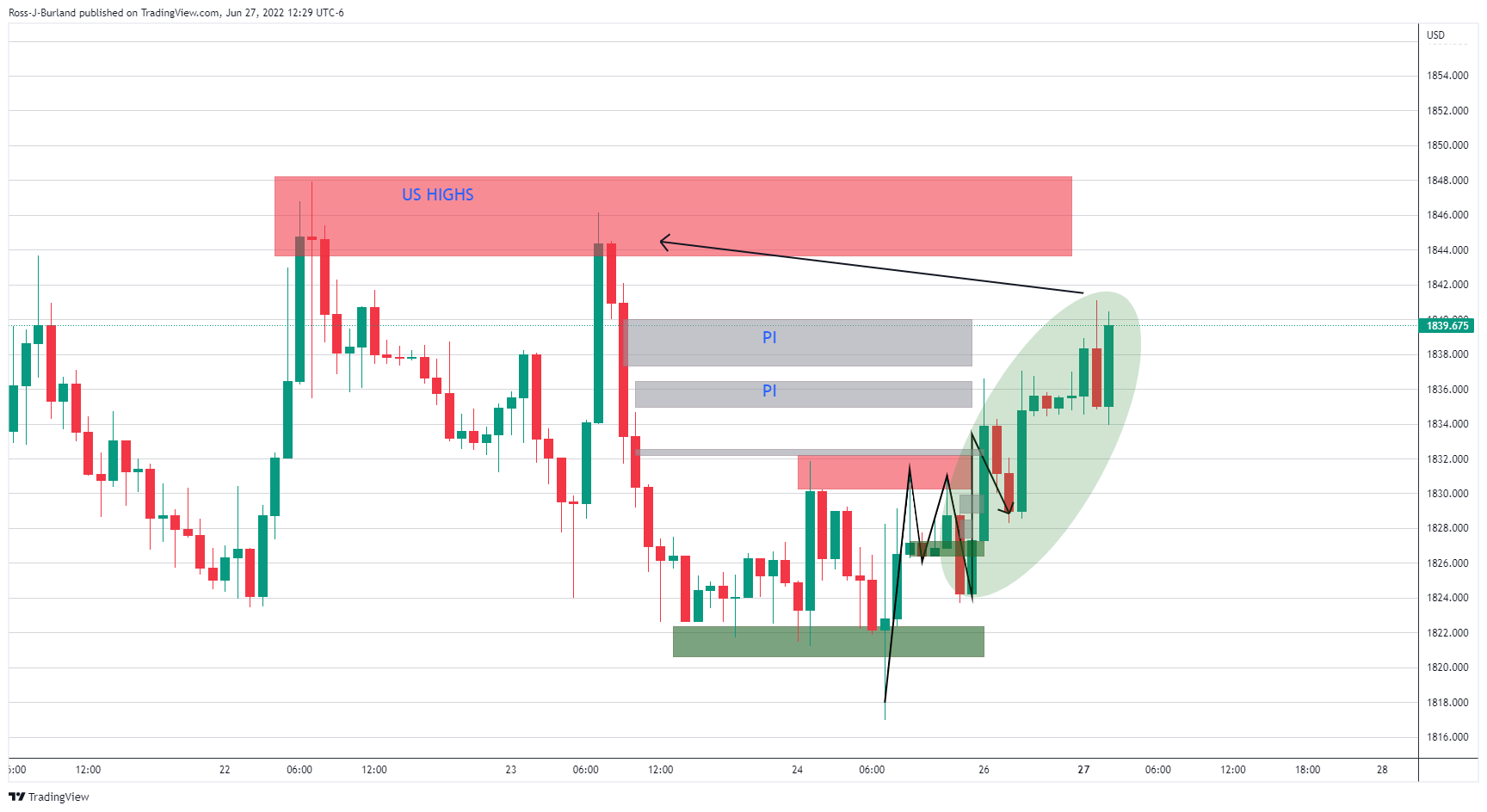 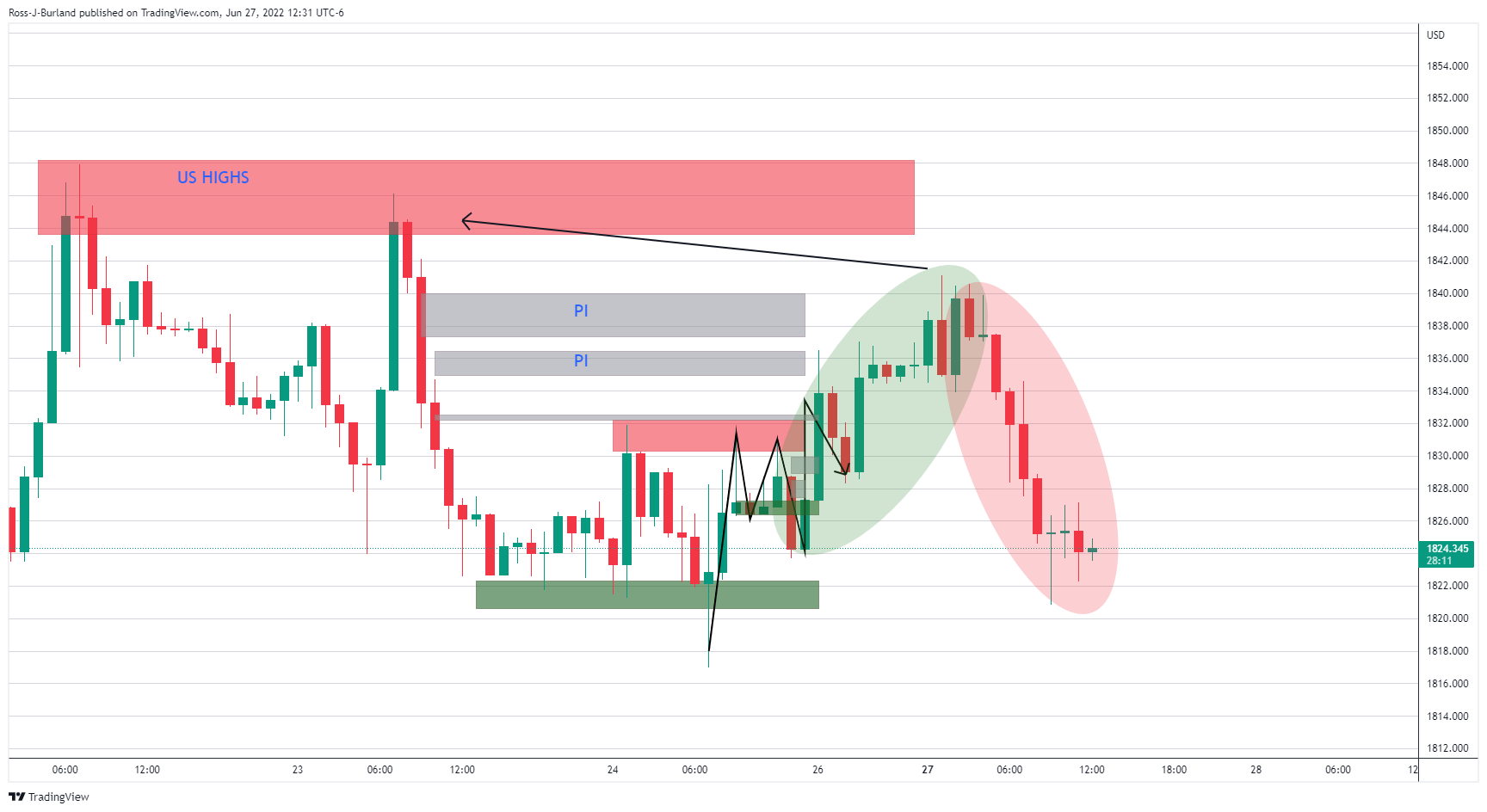 The move lower has coincided with a bid on US yields yet there is a probability that the bulls will be enticed by weakness in the greenback. The price imbalance on the hourly time frame below is located near the neckline of the M-formation at 1,839. 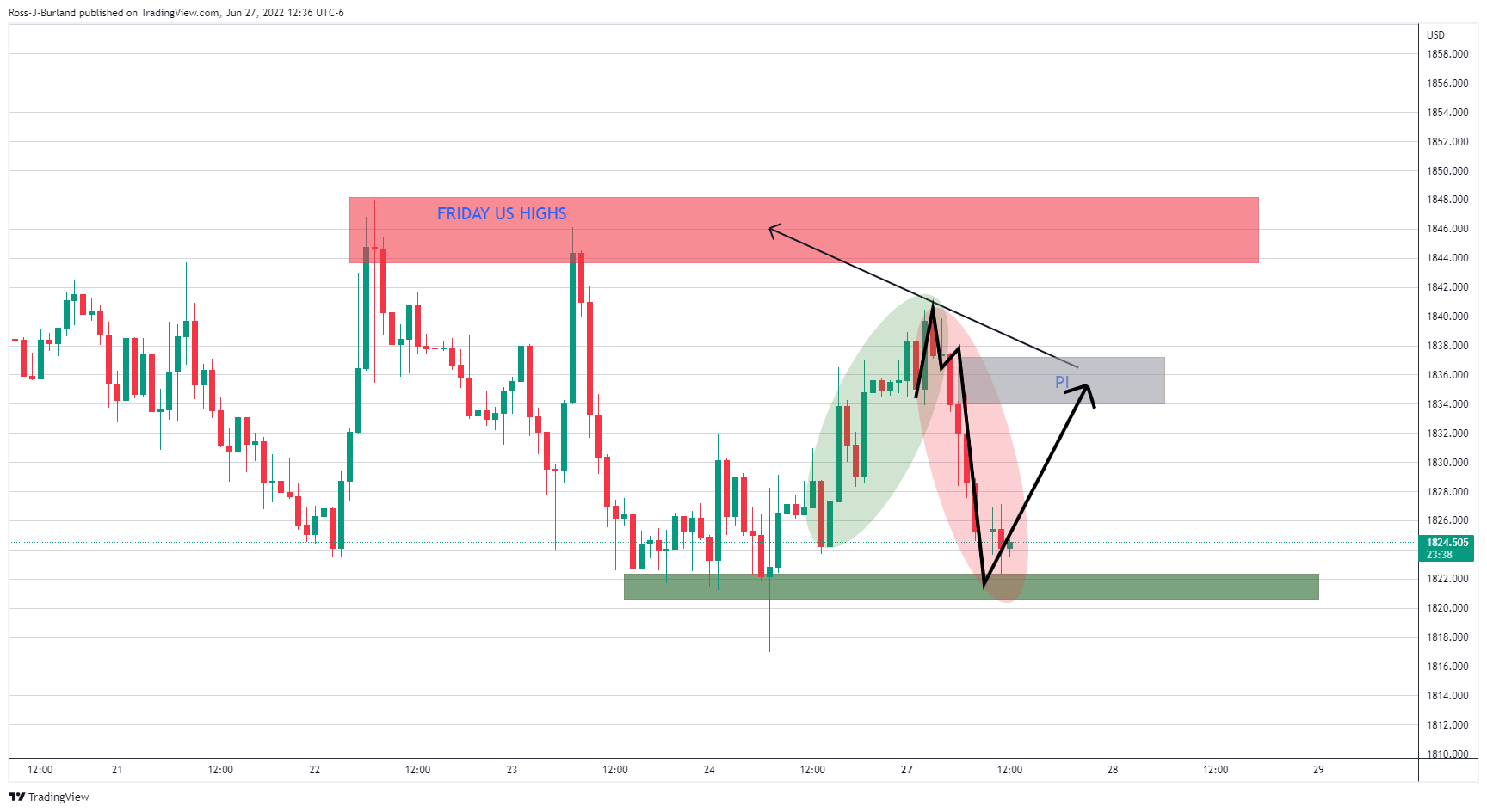