The price of gold has been testing the bearish commitments above the $1,900 psychological level following a brief spell below it, printing a low of $1,891.50.

US election and stimulus news is dictating the flows in and out of the precious metal and has kept it coiled in a tight range of prior sessions.

However, despite the bullish fundamentals, the price has been chipping away at lower lows below trendline resistance.

European stocks ended the day sharply lower and the negative sentiment has fed through to Wall Street setting the Dow for its worst day in more than seven weeks.

New infections have touched record levels in both Europe and the United States.

El Paso in Texas is asking citizens to stay at home for the next two weeks while, in Europe, Italy and Spain imposed new restrictions.

Meanwhile, chances of a fiscal stimulus before the presidential election faded again at the start of the week.

The combination of risks in the count down to the US elections has seen Wall Street's fear gauge VIX hit a near seven-week high.

The growing uncertainty fuelled by the second wave of the coronavirus, it would be reasonable to expect gold to benefit.

Additionally, analysts at TD Securities argued that there is evidence that some investors are willing to look beyond the election and in favour of gold:

''While these factors should see the yellow metal move higher after the election, the bear steepening in the yield curve in a Blue Wave scenario could serve as a hindrance to gold upside in the immediate aftermath.''

However, from a technical standpoint, there is an argument for a near-term liquidation.

The Chart of the Week: Gold under pressure below key counter trend-line

In the above analysis of yesterday, the lows achieved by bears on Monday were forecasted as part of a bearish analysis, which is illustrating the technical case for further downside: 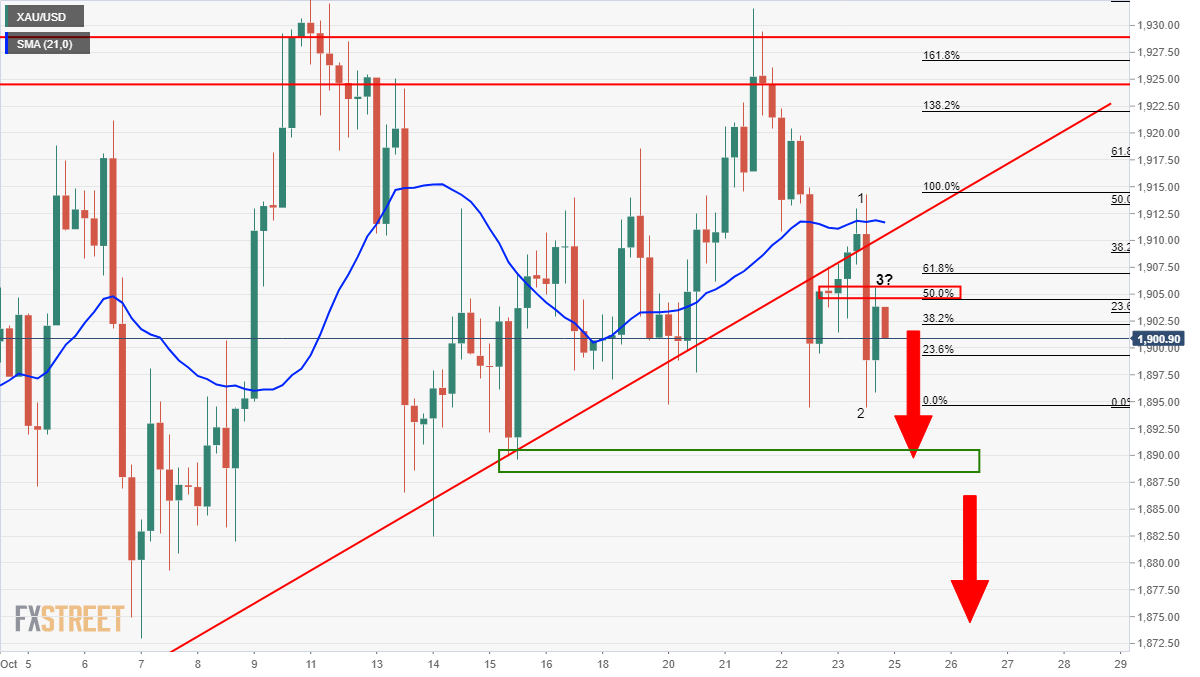 The price has risen back to test the bearish commitments in the 1900s in an aggressive bullish correction after meeting the downside support structure.

A continuation to the downside would be expected on a break of the said support structure.