Gold (XAU/USD) extends its steady recovery mode on Friday, as the bulls look to retest the record highs of $1981.34. The persistent weakness in the US dollar remains the main catalyst behind gold’s surge. The bright metal is set to book the best month in over four months while the greenback eyes the worst month in a decade.

US President Donald Trump floating the idea of delaying the November election spurred political uncertainty while the economic concerns lurk amid the coronavirus resurgence. These factors combined with falling real Treasury yields and US fiscal impasse continue to weigh heavily on the US dollar.

Meanwhile, the recent slew of poor US fundamentals adds to the pain in the buck, as gold bulls now await the US Personal Income and Spending data for fresh trading impetus. Let’s take a look at how it is positioned on the chart.

The tool shows that the bright metal remains on track to retest the record highs, as the bulls remain ambitious to conquer the $2000 level.

However, $1974 is challenging gold’s recovery from Thursday’s brief dip below $1950. The barrier is the confluence of pivot point one-day R1 and pivot point one-week R2.

Acceptance above the latter, the price will target the next hurdle around $1981, beyond which the $1988 supply zone (pivot point one-day R2) will be tested.

Further down, a bunch of minor support levels will offer some cushion around $1957/55, where the Bollinger Band one-hour Middle, SMA5 four-hour and previous low four-hour coincide. 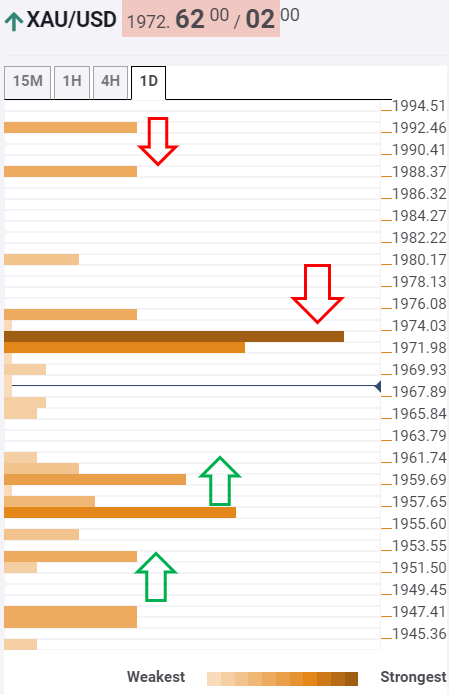 About the Confluence Detector

The Confluence Detector helps gauge the path of least resistance. It locates and points out those price levels where there is a congestion of indicators, moving averages, Fibonacci levels, Pivot Points, etc.