Update: GameStop Corp. reached two-month highs at $153 on Wednesday, although failed to hold onto the higher levels. The meme stocks tumbled 5.30% on the day to settle around $139. The sharp retreat in the GME stock price was fuelled by the latest data released by Koyfin, which showed that the short interest as a percentage of total shares outstanding has soared more than 135% for GameStop since late December, to about 20% of the company. With more investors betting against GameStop shares, the upside quickly faded in the stock price. Additionally, global recession fears mounted and weighed on the overall market sentiment, dragging GME lower alongside the major Wall Street indices.

Retail stocks returned to their winning ways on Tuesday as risk equities outperformed the broader market. The main indices did close positively on Tuesday. All three main indices – Nasdaq, Dow and S&P 500 – closed higher by just under 1%. However, it was smaller cap stocks that led the gains, evidenced by the Russel 2000 (IWM) closing up 1.6%.

Meme and retail stocks though saw a surge of interest with some familiar names posting strong gains. AMC Entertainment (AMC) closed up 9%, GameStop (GME) posted a gain of 14% and EV makers were also strong. There appears to have been no significant catalyst behind the move. It seemed to be a rehash of the tried and tested short squeeze playbook. At one stage GameStop moved to its yearly high and traded flat on the year. Given the performance of mainline equities and the main indices, this is a strong outperformance. GME stock is now up 40% in the past three months and is down just 1% for the year.

GME stock news: The short squeeze is back

Retail traders appeared to be incentivized by the latest short interest report picked up by Reuters that said shorts were increasing their pressure on retail stocks. The report emphasized AMC and GME. This roused the retail army, who pressed the buy button in another attempt to squeeze those positions out. Whether that succeeds or not this time around is up for debate, but certainly the environment has grown harsher for retail traders.

GameStop reported earnings last week on June 1. GME stock has performed strongly in anticipation of those earnings and has managed to hold and build on those gains since. Earnings were a decidedly mixed bag with revenue topping estimates, but GME posted a surprise loss to register a big miss on EPS.

Here we go again! The strong trend line resistance shown below is once again being tested, and it has held every time previously. No reason to expect any difference this time. Also adding to the strength of this level is the 200-day moving average bisecting it. This makes $151 a huge level. Breaking that level would open the door for a move to $200, while failure leads to $127. 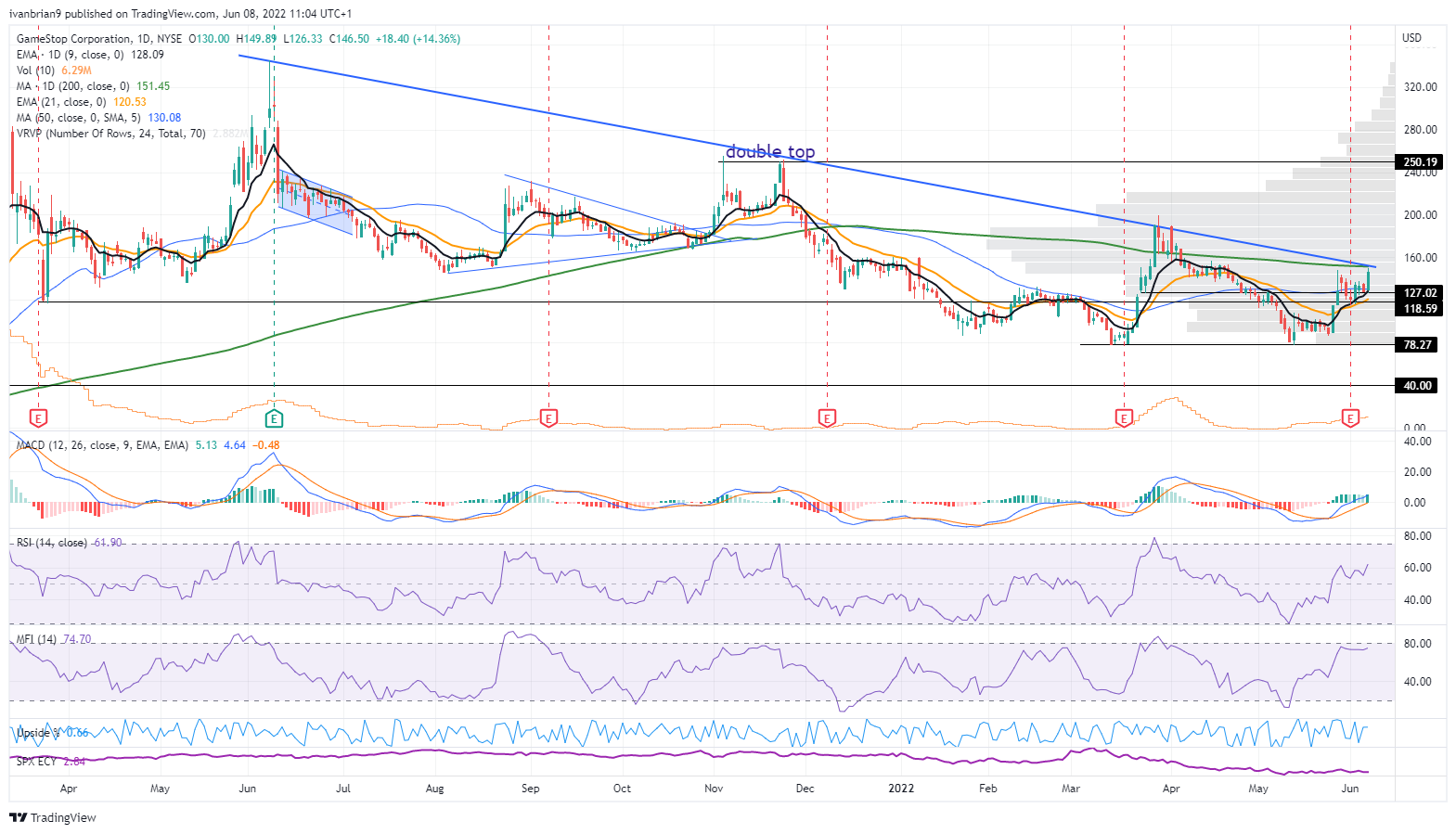 Update: GameStop Corp. trimmed part of its previous gains and finished Wednesday at $138.73 per share, down 5.30%. Wall Street struggled to post gains ever since the daily opening but finally gave up two hours ahead of the close. The catalyst was a statement from White House spokeswoman Karine Jean-Pierre, who said they expect the inflation numbers to be released at end of the week to be "elevated." Inflation in the US stands at multi-decade highs, and the Federal Reserve is applying aggressive tightening in the hopes it would come down. Market participants fear that Fed's decision to drain liquidity will result in a recession similar to the one lived in the 1980s. The Dow Jones Industrial Average lost 269 points, while the S&P 500 was the worst performer, down 1.14%. Finally, the Nasdaq Composite closed at 12,086, down 0.73%.