Update February 25: The frenzy around the shares of GameStop Corp. (NYSE: GME) refuses to die down, as the video gaming company is back in the spotlight after it skyrocketed over 100% into Wednesday’s closing, settling around $92. The trading in the GME shares was halted twice due to the 100% explosion. Throughout the day, GME reported a modest advance but rallied hard in the last hour of trading alongside the surge in fellow Reddit favorites AMC, Blackberry and Tilray. The stock soared an additional 83% to $168 in the post-market trading,  See all equity news

It’s being reported that the shares exploded after Board Member Ryan Cohen tweeted a photo of a McDonald’s ice cream cone with a frog emoji for a caption. Investors likely see the tremendous surge in GME as a short-squeeze 2.0 after the r/WallStreetBets,-led retail-trade craze. The bulls ignored the announcement of the resignation of GME’s Chief Financial Officer, Jim Bell, late Tuesday.

The ramifications from the Gamestop episode are yet to be fully played out. The White House is to investigate if a tax on stock trading is worth considering in the wake of the Gamestop (GME) saga, according to reports from CNN. This would be a significant revenue source for the US as share trading has exploded during the pandemic. The US currently does not impose a tax on share trading for individuals, unlike the UK and many EU countries, where the rate varies from 0.5 to 1%. A $1.9 trillion stimulus package also needs to be funded!

However, there was news from the testimony of Keith Gill, aka Roaring Kitty, aka DeepF********Value on /wallstreetbets, that has the retail community ready to go to war again in Gamestop. Gill said of Gamestop during testimony to Capitol Hill lawmakers, “I do find that it’s an attractive investment at this price point". Gill also appeared to have bought another 50,000 shares of GME as he shared a screenshot on /wallstreetbets on Friday afternoon.

This emboldened /wallstreetbets traders with further impetus to "go again", and at the time of writing, shares in Gamestop have rallied 11% to $44.89 during Monday's pre-market session.

For now, sentiment appears to be favouring bulls, but it is hard to say for how long. Given increased institutional attention, it is harder for retail to dominate the Gamestop pitch like before. But the trend is your friend, so jump on and just make sure to manage risk carefully. Making a forecast in this one is not for the faint-hearted and beyond the capabilities of this author!

Update February 24: GameStop Corp.(NYSE: GME) has kicked off Wednesday's trading session with a jump of around 4% to $46.78 at the time of writing. While broader stock indexes are falling, equity of the videogaming company is on the rise. A week after the grilling on Capitol Hill, lawmakers have moved from scrutinizing the frenetic action around GameStop to the testimony of Jerome Powell, Chairman of the Federal Reserve. Action on Reddit forums – by Roaring Kitty and others – remains a force in shaking shares.

Gamestop appeared to be fading into the background after last week's Capitol Hill testimony. Payment for order flow is to be examined again as Citadel Securities made public the 40% share of retail orders they process. Vlad Tenev, CEO of Robinhood, also apologized for not doing things perfectly and admitted it could have been a lot worse if Robinhood had not managed to secure $3 billion in funding for collateral with clearing brokers for the huge volume of Gamestop trading.

February 24: GameStop Corp (NYSE: GME) has been on the back foot, falling by 2.24% on Tuesday to end the day at $44.97. At the time of writing, shares of the Texas-based videogaming veteran are changing hands at the round $44 level, another loss of 2%. It is essential to note that despite falling tumbling from the frenetic highs around $400, those investing in GME early in the year have more than doubled their investment. Is the current slide a prelude to even greater falls? Or perhaps a"buy the dip" opportunity? Federal Reserve Chair Jerome Powell lifted spirits and stock markets with a soothing message, and he appears in Congress again on Wednesday. 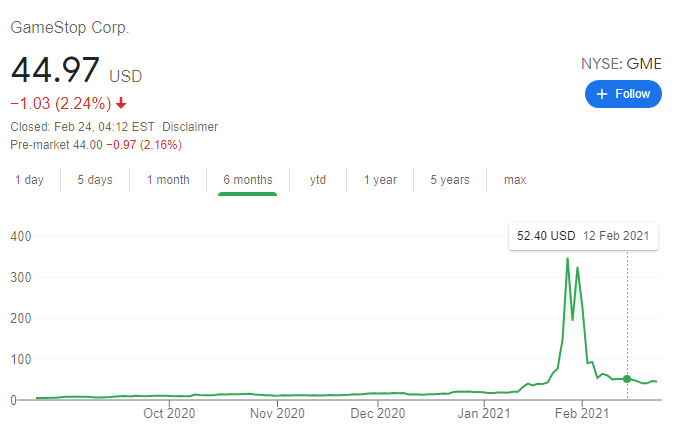 Gold struggles to keep $1,800, recently bouncing off 100-HMA, during the early Thursday. Even so, the yellow metal declines for the third consecutive day while following a downward sloping trend line from February 10.

GBP/USD keeps the longest weekly rally in three years above 1.4100