Update Thursday, February 4: Shares in GameStop (NYSE: GME) returned to the red in the post-market hours to settle in the lower end of Thursday’s trading range near $90. The stock price reversed the recovery rally and eroded 3.5% after the closing. The sellers returned after Bloomberg reported that the Securities Exchange Commission (SEC) is looking to probe some of GME’s promoters while hunting for misinformation meant to improperly tilt the market. The GameStop shares could likely resume the recovery from Wednesday’s 60% decline, as Robinhood Markets Inc. has raised limits in buying GME to 500 shares from 100 shares. US Treasury Secretary Janet Yellen to meet with financial market regulators on GameStop turmoil this Thursday.

Update 2 Wednesday, February 3: Shares in Gamestop staged a recovery on Wednesday after a horrible session on Tuesday. Gamestop rallied back above $100, up nearly 15%. Reuters reported that according to S3 partners the number of shares shorted in Gamestop (GME) rose slightly on Tuesday. The SEC was on the hunt for fraud in pushing up Gamestop, according to a report by Bloomberg.

Update Wednesday, February 3: The shares in Gamestop (GME) stalled their brief recovery stint into Tuesday’s closing, as the stocks suffered a 60% decline on a daily basis. The shares of the mid-sized video game retailer lost another 5.50% in the post-market trading, breaching the $100 mark once again. The price collapsed to a six-day low of $74.22 but staged a quick bounce to recapture $150 after Robinhood Markets Inc. reportedly raised its share purchasing limit from 20 shares to 100 shares.

Update 2 Tuesday February 2: Shares in Gamestop continued the wild ride on Tuesday, rallying nearly 60% from session lows. Robinhood was said to raise its share buying limit from 20 shares to 100 shares for Gamestop. Mark Cuan on CNBC says "Robinhood took out a bunch of natural buyers".

Update Tuesday February 2: Shares in Gamestop (GME) collapsed on Tuesday as it appeared the retail driven short squeeze was coming to an end. All related stocks AMC, BB, BBBY etc were sharply lower all having had huge gains for 2021. S3 partners had reported late on Monday that the short interest in Gamestop (GME) had fallen dramatically as had the cost of borrowing shares in GME.

Update Monday, February 1: The market had time over the weekend to catch a breath after a bizarre and wild ride for global stock markets. The Gamestop saga became mainstream news with articles in all major national and most local newspapers and TV stations. It seems everyone has an opinion, most it must be said are siding with the “David” in this story, /wallstreetbets. Monday is set to see the battle royal continue with most posters over the weekend on /wallstreetbets talking of holding or buying more shares of Gamestop.

More worryingly, a lot of newbies appear to have joined. At the time of writing, /wallstreetbets has 7.8M members, this is up from 2 million when we first started covering the phenomenon approximately 10 days ago! It is these late-to-the-party traders that stand to lose the most, buying Gamestop (GME) at an already hugely inflated price. This story is set to run for a while more yet!

Update: Gamestop shares continue to trade strongly on Friday, with shares up 70% at the time of writing. Senator Elizabeth Warren blasts the SEC “To have a healthy stock market, you’ve got to have a cop on the beat” and “They need to step up and do their job”. Anthony Scaramucci speaking on CNBC's Halftime Report Says “This Was Bound To Happen,” “These [Traders] Are Smarter Than People Think”.

Meanwhile according to Reuters S3 partners says Gamestop short interest is now at $11.2 billion, a decline of 8% in the last week.S3 says it is still the third-largest behind Tesla(TSLA) and Apple (AAPL).

Update: Gamestop shares followed through on Friday's strong pre-market rally. Currently, GME shares are up 60% at $314 in the first hour of Friday's regular session. GME shares had peaked above $400 during Friday’s pre-market.

Reuters reported the SEC as saying 'Market Participants Should Be Careful To Avoid' Illegal 'Manipulative Trading Activity' and that the SEC will 'Closely Review Actions Taken By Regulated Entities That May Disadvantage Investors' Or 'Inhibit Their Ability To Trade Certain Securities'.

Gamestop (GME) shares continued to have a volatile time on Friday with multiple circuit break halts in trading.

​​Gamestop (GME) shares collapsed on Thursday as brokers put restrictions in place on options trading, taking new positions and hiked margin levels. While some measures were to "help" retail investors, particularly increased margin, stopping new position taking appears to have done exactly what the brokers said they were trying to avoid. That is, retail traders losing heavily. By taking new buy orders out of the market the Gamestop (GME) share price obviously collapsed, closing Thursday's session at $193.60 from a high of over $500!

Politicians and celebrities entered the fray all on the side of retail, demanding to know more details about the reasoning behind the restriction on Gamestop (GME) trading and calling for a possible investigation. 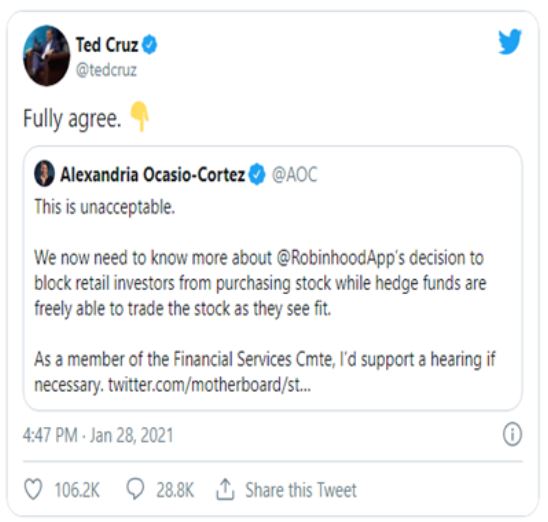 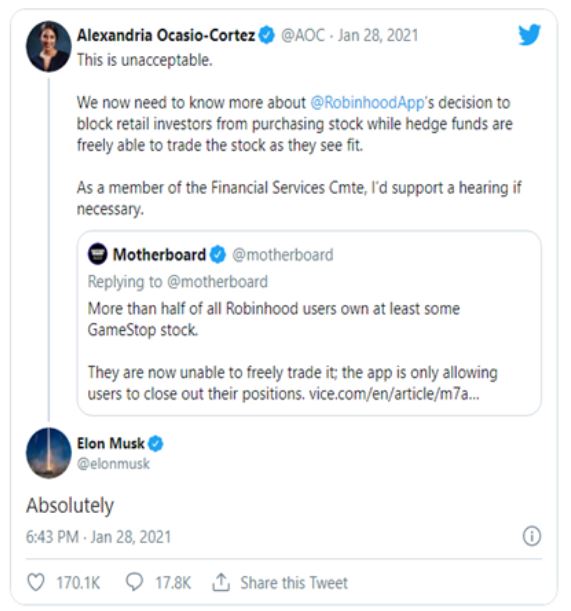 Robinhood suffered heavy reputational damage in the aftermath, with rumours swirling about who influenced the decision.

Google removed over 100,000 one-star reviews of the Robinhood app.

Robinhood was the subject of two class-action lawsuits, in Manhattan and Chicago.

The pressure appeared to tell on Robinhood. Vlad Tenev co-founder and CEO appeared on CNBC last night and said Robinhood plans to allow “limited buys of these securities”. “We’re doing what we can to allow trading in certain securities tomorrow morning,” the CEO also said on the CNBC show. The brokerage company also released a statement on Thursday saying “As a brokerage firm, we have many financial requirements, including SEC net capital obligations and clearinghouse deposits. Some of these requirements fluctuate based on volatility in the markets and can be substantial in the current environment. To be clear, this was a risk-management decision, and was not made on the direction of the market makers we route to.”

Gamestop (GME) shares rallied on the news and are currently trading at $416 in Friday’s pre-market session, a rise of over 100%.