Skip to main content
;
EUR/USD is currently trading at 1.2157 having travelled between a range of 1.2111 and 1.2179 on the day so far, catching a bid on Federal Reserve Jerome Powell's remarks.

Today’s speech by Fed Reserve Chairman Jerome was being closely scrutinised for signs of potential changes to monetary policy.

There has been a fair bit of discussion from Fed speakers of late about an exit strategy and tapering.
The Fed is currently buying US$120bn of US Treasury bonds and mortgage-backed securities every month but at some point, this spending will be tapered back.
However, Powell stated that now is not the time to be talking about a Fed exit.
Other Fed members have indicated this could occur later this year but comments from Powell indicate easing will not happen until inflation is at 2% for a year.

US dollar correcting the long-term decline

Besides the latest dip in the dollar following the remarks from Powell, the dollar had risen for a second straight session on Thursday, holding above three-year lows against major peers.
This was in line with a rise in Treasury yields, amid upbeat expectations about President-elect Joe Biden's fiscal stimulus.
The dollar has risen in six of the last seven trading sessions and the benchmark 10-year Treasury yield moved above 1% for the first time since March.
Biden is expected to unveil a stimulus package proposal on Thursday designed to jump-start the economy during the coronavirus pandemic with an economic lifeline that could exceed $1.5 trillion and help minority communities.
However, the question is whether the fact is already baked into the cake and the reflation trade has less chance of taking off on Biden's plan alone, especially following Fed's Powell's comments today.
US bond yields have unwound yesterday’s spike on dovish Fed chair Powell comments.
Meanwhile, there has been a bid in global stocks and European shares gained for a third straight session.
The pan-European STOXX 600 index rose 0.72% and MSCI's gauge of stocks across the globe gained 0.47%.
The US dollar had been negatively correlated to the performance of stocks throughout the pandemic, but that has flipped in recent days to a positive correlation.

The US dollar is correcting a monthly decline as follows: 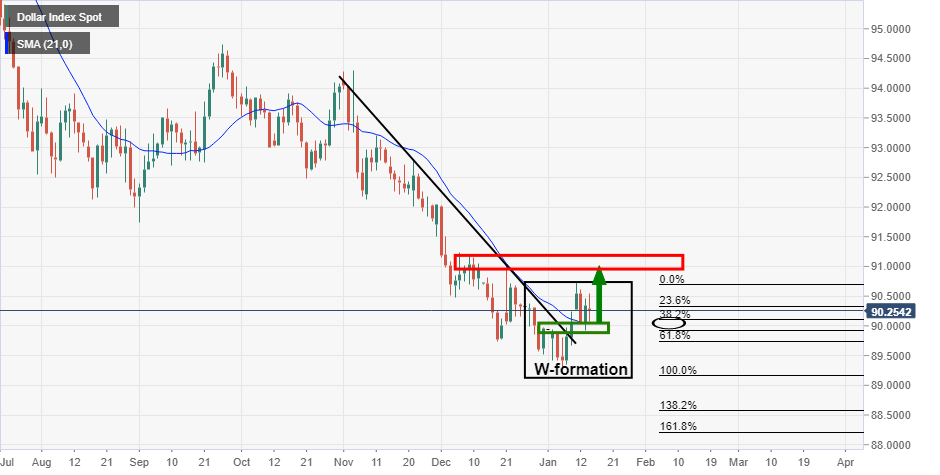 If the market has already baked in the fact of ongoing stimulus and lower rates, then the dollar has plenty of ground to correct, especially on a bullish economic presumption and rising US yields.
The significance of the W-formation on the DXY and concerns for the eurozone's economic/covid lockdown backdrop led to the following analysis in the euro:

The current state of play... 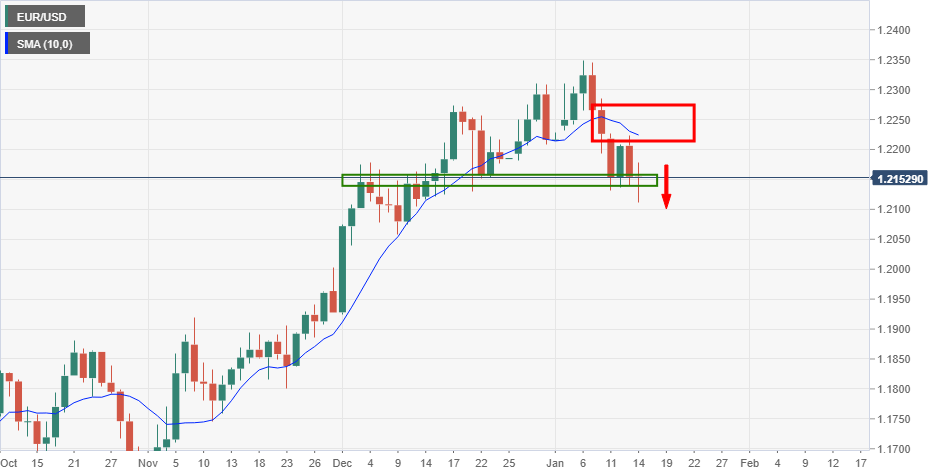