The shared currency is almost flat in the North American session after reaching a daily high at 1.0938, courtesy of hawkish than expected European Central Bank (ECB) March meeting minutes, despite broad risk aversion in the market. Nevertheless, of late, the EUR/USD dipped below the 1.0900 mark and is trading at 1.0879 at the time of writing.

On Thursday, the ECB unveiled its March 10 minutes. The Governing Council (GC) said that it could afford to be patient, with measures of long-term inflation expectations at around 2%. Regarding the Ukraine-Russia War, the GC added that the initial effects of the war on the EU economy would be upwards on inflation and downwards on economic growth and noted that it could have inflationary/disinflationary impacts in the longer term.

The EUR/USD reacted upwards on the release. However, a dismal market sentiment courtesy of the continuation of the Russia-Ukraine war, and Wednesday’s hawkish Federal Reserve minutes, exerted downward pressure on the common currency, dragging the pair back under the 1.0900 mark.

The EU economic docket revealed Retail Sales for February. The monthly reading expanded by 0.3%, at a slower pace than the 0.6% estimated. But, the year-over-year figure rose by 5%, higher than the 4.8% foreseen though trailed by January’s 8.4% increase.

The US docket revealed Initial Jobless Claims for the week ending on April 2, which came at 166K less than the 200K expected.

The EUR/USD bias remains downwards and further cemented it when on April 4, the EUR/USD broke the upslope trendline of a rising wedge, which opened the door towards 1.0700, but first would need to overcome some hurdles on its way down. 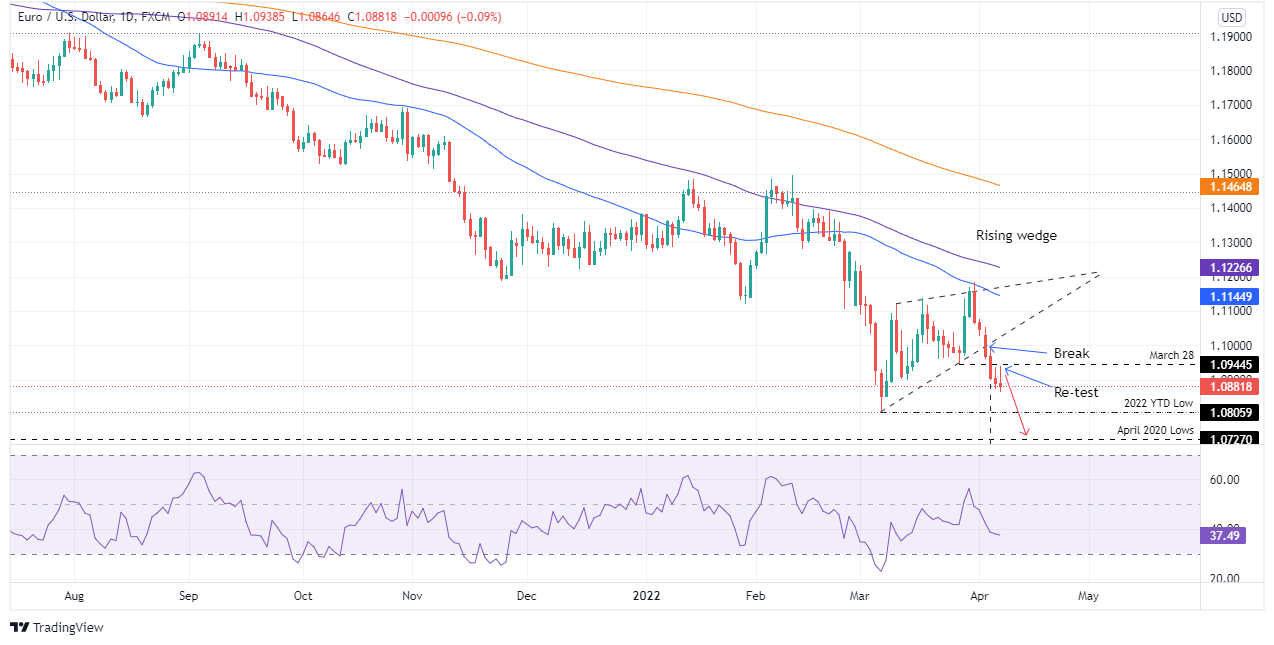