Update May 6: CCIV shares have again opened negatively on Thursday, losing 1% in early trading. CCIV shares are currently at $19.02 having broken the key $20 level earlier. The next target, support is at $17.62. Elon Musk had earlier this week tweeted about Lucid CEO Peter Rawlinson downplaying his role at Tesla (TSLA).

Just a little recap for those of you not familiar with the story. Churchill Capital IV is a Michael Klein-backed SPAC that merged with Lucid Motors to take it public. Michael Klein is a former Citi rainmaker with myriad connections in the financial markets. Lucid Motors is an electric vehicle startup that is due to release its first EV in the second half of 2021. The company is headed by a former Tesla chief engineer, Peter Rawlinson.

CCIV shares fell victim to the retail frenzy in evidence at the start of 2021 and rallied to extraordinarily expensive levels of nearly $65. The frenzy was mainly down to retail traders, who viewed CCIV and Lucid Motors as the next Tesla. Retail traders have grown increasingly frustrated at the lack of access to IPO deals and have turned to SPAC deals as a means of getting involved in a company early, akin to an IPO.

Now here is where it gets interesting. Rumours began circulating earlier this week that Lucid was in possible talks with Apple over a collaboration. The rumours as ever with CCIV are fairly dubious and in this case appear to be based on the simple fact that Lucid CEO Peter Rawlinson did not deny there was contact between Lucid and Apple. So that was it, that was enough to spark a 16% rally on April 26. Well, CCIV is nothing if not interesting.

Well, maybe not quite, as it should be noted that former Apple Chief Designer Jony Ive sits on the operations team of Lucid Motors. Jony Ive was largely credited with having a major role in transforming Apple along with Steve Jobs into the global behemoth it is today.

Younger readers may not remember, but Apple was languishing in the 1990s as a former washed-up tech titan. Investors and the public viewed it as a sort of modern-day Nokia or Blackberry that had been left behind by the likes of Microsoft and some of the Asian tech titans. All that changed with the introduction of the iPod in 2001. The iPod revolutionized the music industry and set the scene for the iPhone in 2007, which basically revolutionized the world and in the process set the scene to nearly wipe out Nokia and Blackberry. Jony Ive was instrumental in the sleek and uber cool designs that made Apple products so desirable. The hope then is that he can do the same for Lucid.

Rumours are rumours until they are confirmed or denied, and CCIV tends to go through a lot of them. The technical chart levels at least deal in cold hard facts, so let us have a look and see what trading opportunities are evident.

Clearly, the 50-day moving average is holding CCIV shares in check, and this is the first resistance, currently at $23.62. A break of this should see CCIV test the $24.96 high from April 6 and $25 as a psychological round-number resistance. Breaking through will bring $28.77 into view.

The short-term trend is bullish as long as CCIV remains above the 9-day moving average and the Moving Average Convergence Divergence (MACD) is crossed into a bullish signal. The Directional Movement Index (DMI) is contradicting this, having nearly confirmed the MACD but failing. This needs to be watched as any more price appreciation should see the DMI confirm the MACD crossover buy signal.

Buying dips to the 9-day moving average with a stop just below and reassesing near the resistance levels is a possible trading opportunity. 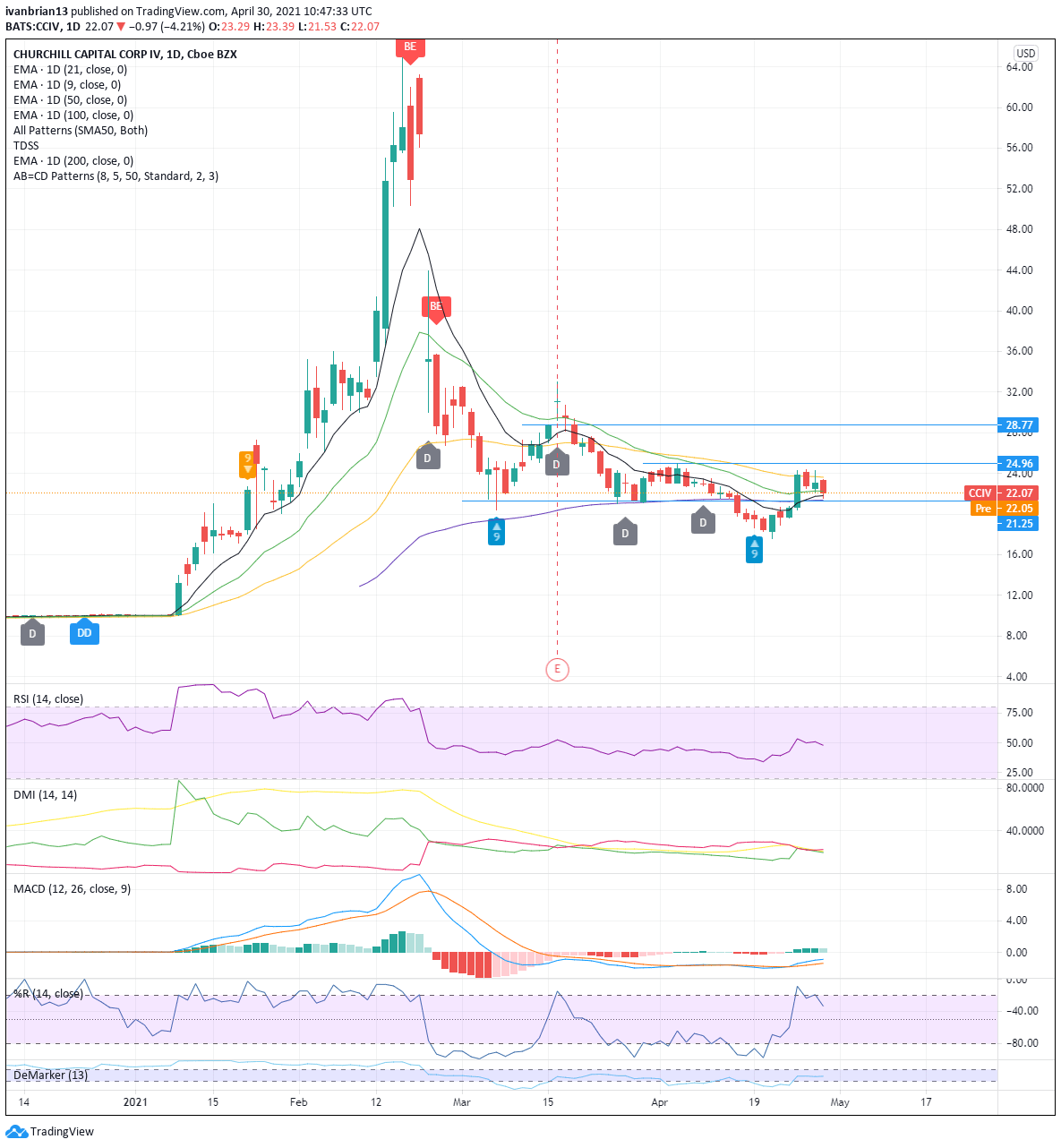 Update May 3: Churchill Capital Corp IV (NYSE: CCIV) has closed April with a whimper, tumbling 4.48% on the last day of the month, to close at $21.09. Shares of the blank-check company that is set to merge with Lucid Motors is still above levels recorded in mid-April, when it sank under $20 and caused jitters among long-term investors. Recapturing $22 is critical.

Update May 4: CCIV shares continue to slide on Tuesday as the broader market adopts a risk-off tone. CCIV shares are trading 2% lower at $19.52. Breaching the psychological $20 level will see PLTR shares target $17.62, the low from April 21. Look out below if that support is broken as $14 high from January 11 is the next support.

Update May 3: Churchill Capital Corp IV (NYSE: CCIV) has kicked off May with a slide of 1% to just below $21. The company which is SPAC-merging with Lucid Motors is losing ground alongside other shares in the electric-vehicle sector. Nio and other firms are also on the back foot as the focus shifts away to other areas of the economy. The broader S&P Index is falling.