The Australian Dollar (AUD) extended its gains for three straight days and reclaimed the 0.6700 figure on Thursday, courtesy of the November Federal Reserve minutes, which plunged the US Dollar (USD) against most G8 currencies. Therefore, the AUD/USD is trading at 0.6764, after hitting a daily low of 0.6726, in a light trading session, in observance of the Thanksgiving holiday in the United States (US).

Sentiment remains positive, as shown by European equities finishing in the green. The release of the Federal Reserve Open Market Committee (FOMC) minutes weighed on the US Dollar as officials agreed to slow the pace of rate hikes. Minutes were dovish tilted, as policymakers saw growth risks are skewed to the downside. In fact, Fed officials acknowledged a 50-50 chance of a recession in the United States.

Nevertheless, investors should be aware that policymakers expressed “uncertainty” about how high rates need to go and would be data-dependent. That said, caution is warranted, as the Federal Reserve would continue to increase borrowing costs.

Data-wise, the US economic docket on Wednesday was packed. S&P Global PMIs for November flashed signs of recession, mainly the Manufacturing Index, dropping to 47.6 vs. 50.4 on the previous reading. Later, the Consumer sentiment report released by the University of Michigan (UOM) printed 56.9, showing that Americans remain slightly optimistic about the economy. Inflation expectations were mainly unchanged.

On the Australian side, Covid-19 cases in China would likely keep the Australian Dollar (AUD) contained. However, the AUD was bolstered by hawkish comments by the Reserve Bank of New Zealand (RBNZ), which lifted rates by 75 bps on Wednesday. Investors should remember that the Reserve Bank of Australia (RBA) minutes showed that officials are open to either pausing the tightening cycle or returning to more significant interest rate hikes depending on incoming data.

The AUD/USD daily chart shows the major resumed its uptrend, after testing the 50% Fibonacci retracement at 0.6596, on Monday. Once the Australian Dollar buyers reclaimed 0.6700, they briefly tested the November high of 0.6797, which, once cleared, could send the AUD/USD toward the inverted head-and-shoulders chart pattern target of 0.6870. As an alternative scenario, the AUD/USD first support would be 0.6700, followed by the 100-day Exponential Moving Average (EMA) at 0.6687 and the 38.2% Fibonacci level at 0.6644. 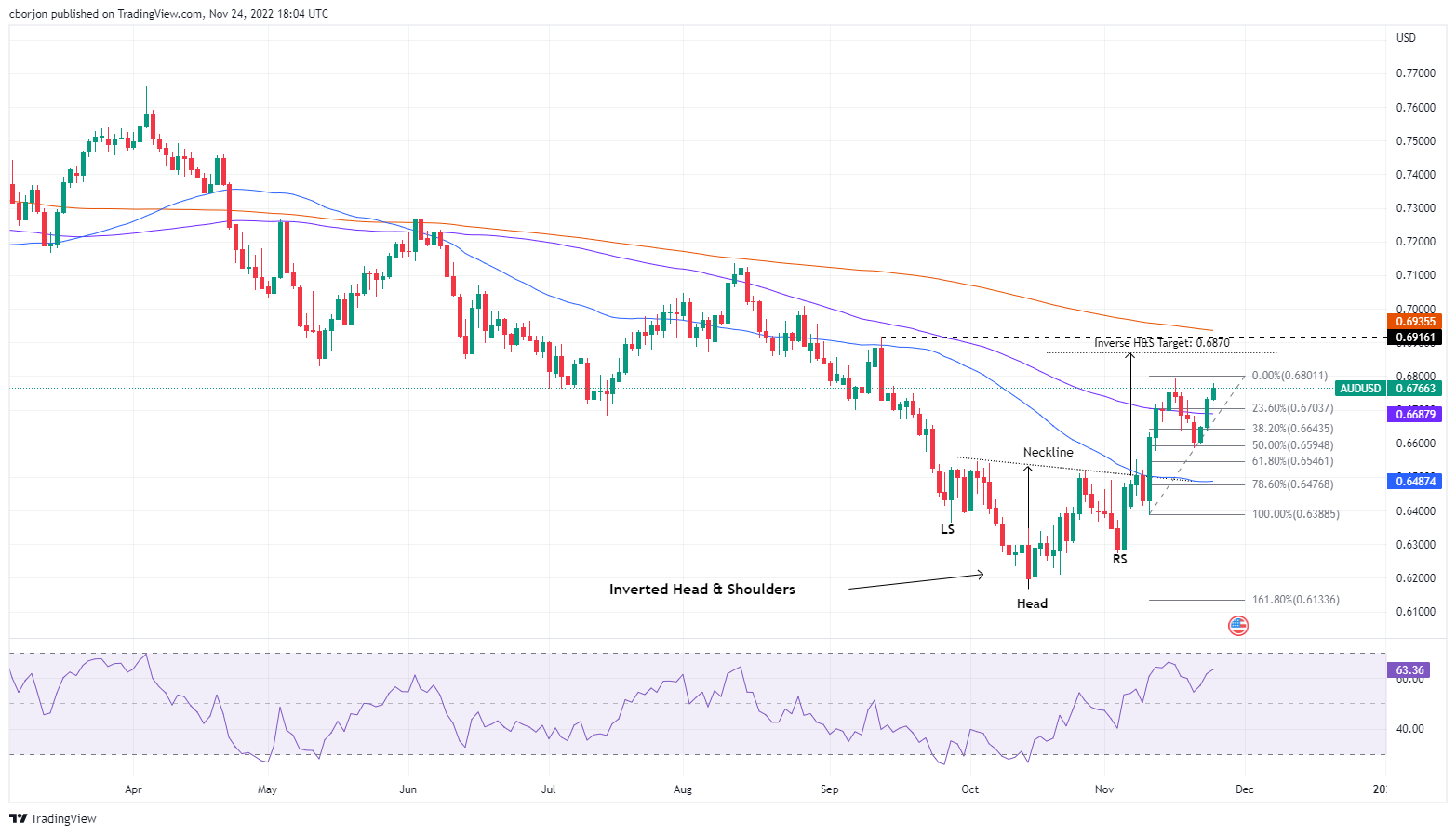