Update: Trading lower on lower-than-average trading volumes, AMC stock has moved in on the 50% mean reversion area and the start of 2022's price in the lows of Thursday's trade at $23.26. The price has left a daily doji candle and could be in for some consolidation for month-end as profits are taken off the table with Nonfarm Payrolls now the focus in financial markets for Friday's business. Employment in the US may have continued to advance in March following two strong reports averaging +580k in Jan and Feb and a new drop in the unemployment rate to a post-COVID low would be expected to support the greenback further.

Update: AMC stock has fallen off, as the kids would say, on Thursday. One hour into the session, shares have sold off 7.6% to $23.74. FXStreet has been calling a downside target at the $21.04 pivot most of this week. All three indices are lower in the early part of Thursday's session. The S&P 500 is off 0.3%, the Nasdaq down 0.4%, and the Dow has dropped 0.5%. This means that the flight is not just away from risk at the moment, or the dreaded move to value, but is instead falling prey to profit-taking. This makes sense since the major indices have witnessed an unusual four-day streak of gains. Typically, markets are more mixed, and so bulls may be biding their time and waiting for the next upside move. Oil has fallen more than 4% on the day, which typically buoys equities, but the sell-off was due to the Biden Administration and OPEC promising to increase supplies and not from a reduction in longer-term pressure from the war in Ukraine.

AMC stock fell pretty sharply on Wednesday, more than we had anticipated. This one is volatile. Even though we said to take profits on Wednesday, as we could see the momentum fading, we thought maybe something in the region of 6-10% was in the cards. Falling nearly 13% gave back nearly half of the 44% gains seen on Monday. Now that this momentum has stalled, it is likely to see more falls as these retail momentum plays usually fizzle out quickly. This is most evident in GameStop and AMC with a series of spikes getting progressively lower.

Bad timing from chief AMC ape and CEO Adam Aron. He tweeted Wednesday about making crow soup for Wall Street analysts who had been critical of the deal to invest in Hycroft Mining (HYMC). Unfortunately that stock also lost ground on Wednesday, dropping 8% to close at $2.39. It traded as high as $3.10 on Monday. On the flip side, HYMC had a decent chance of going bust if not for AMC's investment, so we will see who has the last laugh.

The fact remains that Adam Aron is pretty adept at whipping his AMC apes into shape and getting behind the latest trend. Expecting more of these types of investments was the call from Adam Aron. AMC is becoming a meme stock investment vehicle in addition to being a cinema chain. Perhaps a better idea would be to whip up a large offering, raise a truckload of cash and buy a chunky stake in Disney (DIS). Then AMC would some power over Hollywood's biggest studio and when and what they show in your theatres versus direct to streaming. Just a thought!

So we got the pullback, now where is AMC stock heading next? Looking at the previous spikes in June, September and November 2021, they all show a pretty similar trend. A massive spike with a sharp pullback. In most cases, the pullback saw one more attempt at a rally before the real capitulation took place. AMC apes may rouse themselves for one more push, but history tells us it will stop short of the high at $34.33 from Monday. $21.04 remains then our medium-term target. Close above $34.60 and we bow to the AMC apes and look to $38-$40 as volume resistance. 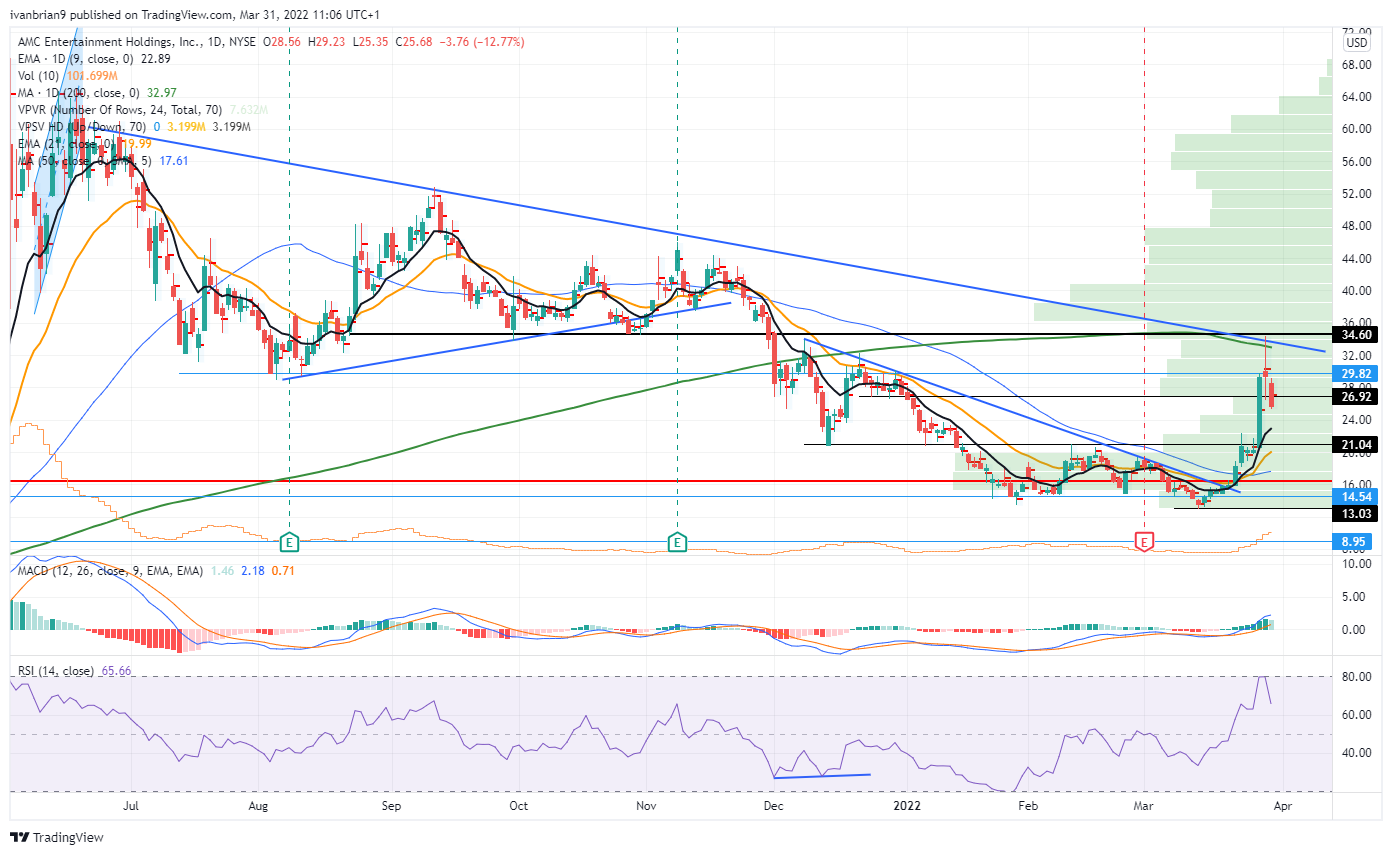 Prior Update: The woes seem to continue if the early trading is indicative of things to come for AMC stockholders. AMC briefly spiked up to $25.60 in the first minute of trading but has since fallen back to trade down nearly 3% at $25 after ten minutes. AMC is nothing if not volatile so while a 3% move would be huge for the likes of Apple (AAPL) or Tesla (TSLA) it is business as usual for AMC. The stock is struggling for momentum after massive gains. History shows that AMC tends to have massive spikes, massive pullbacks before the last spike then fails to recapture previous highs and a downtrend begins. Will it be the same this time?