Update June 15: AMC Entertainment Holdings Inc. (NYSE: AMC) rallied hard on Monday, extending the previous week’s recovery momentum towards the midpoint of the $60 level. The stock jumped 15.38% on the day, closing at $57 after reaching four-day highs at $60.47. Despite not so encouraging fundamentals of the US-based cinema chain, the shares recovered further amid ongoing talks of share sales. According to the latest reports, AMC wants approval from its shareholders to issue 25 million shares in the year 2022. Additionally, increased demand for the meme stocks also supported the AMC shares.

Some huge option open interest is driving the AMC share price higher as retail bulls go head-to-head with shorts and gamma squeezed market makers. Friday saw the stock just fail to close above $50, with a large option expiry for $50 calls. This coming Friday, June 18, sees a turn toward $40 calls, with a large open interest of 100,932 contracts as per the latest Refinitiv data.

The first six option contracts all expiring this Friday total up to about 325,000 contracts. Each option contract is for 100 shares, so this is a total of 32.5 million shares potentially, a decent chunk. All bar the second one, the $145 calls are in with a good chance to expire in the money and who knows with AMC maybe the $145 strike will make it as well. Either way, it is a large number of underlying shares to be exercised. Now the market makers will have hedged most of the positions but perhaps not all, and it gives an interesting backdrop to the flow dynamics going on at present in AMC.

Taking a bit more detail than usual with a 4-hour chart we can see how well AMC has stabilized at current levels around $50. The volume profile bars on the right of the screen show a lot of volume from $44 to $56, with the volume-based point of control being at $48.97. There is a total lack of volume sub-$38, and shares may see an acceleration to $30 if broken.

Update June 14: AMC Entretainment Holdings Inc. gained 15.38% on Monday to close the day at $57.00, up for a second consecutive day. Fears about overbought conditions got diluted by resurgent demand of the meme stock, despite the company keeps struggling to stay afloat within the pandemic context. The advance, however, lacks follow-through. Despite recovering ground, technical indicators maintain their neutral stances, without directional momentum. The share is meeting sellers around the 23.6% retracement of its latest bullish run around the 60 figure, with gains beyond it anticipating another $10.00 run in the near-term. 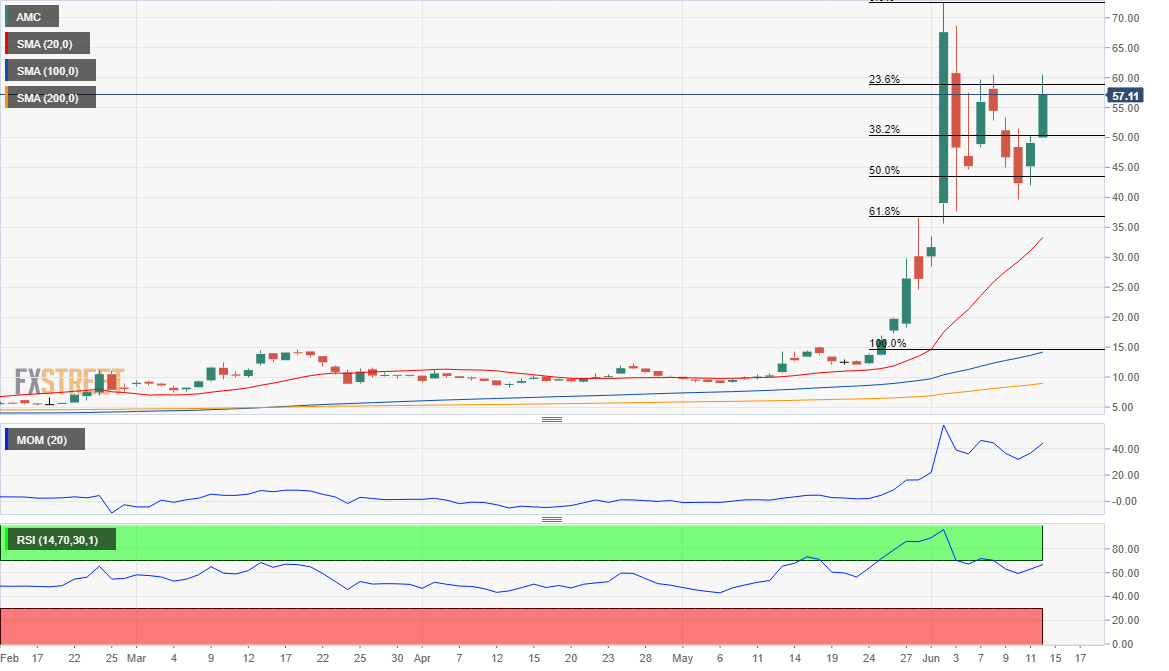 EUR/USD has advanced signifcantly above 1.1850 as the US dollar retreats from the highs despite rising US yields. ECB President Christine Lagarde did not mention monetary policy on Friday after presenting a strategic review on Thursday.

GBP/USD is trading closer to 1.39, moving up as the US dollar takes a breather from its gains. Earlier, UK GDP missed estimates with 0.8% in May and BOE Governor Bailey refrained from talking about monetary policy in his speech. Covid headlines are eyed.

Cardano price is anticipating a bounce from a crucial demand zone ranging from $1.287 to $1.318. Charles Hoskinson faced slack on Twitter due to his July 2020 prediction.

The Delta covid variant is set to spread across Europe and the US. High transmissibility and insufficient vaccination levels could grind economies to a new halt. The safe-haven dollar may be the short-term beneficiary.